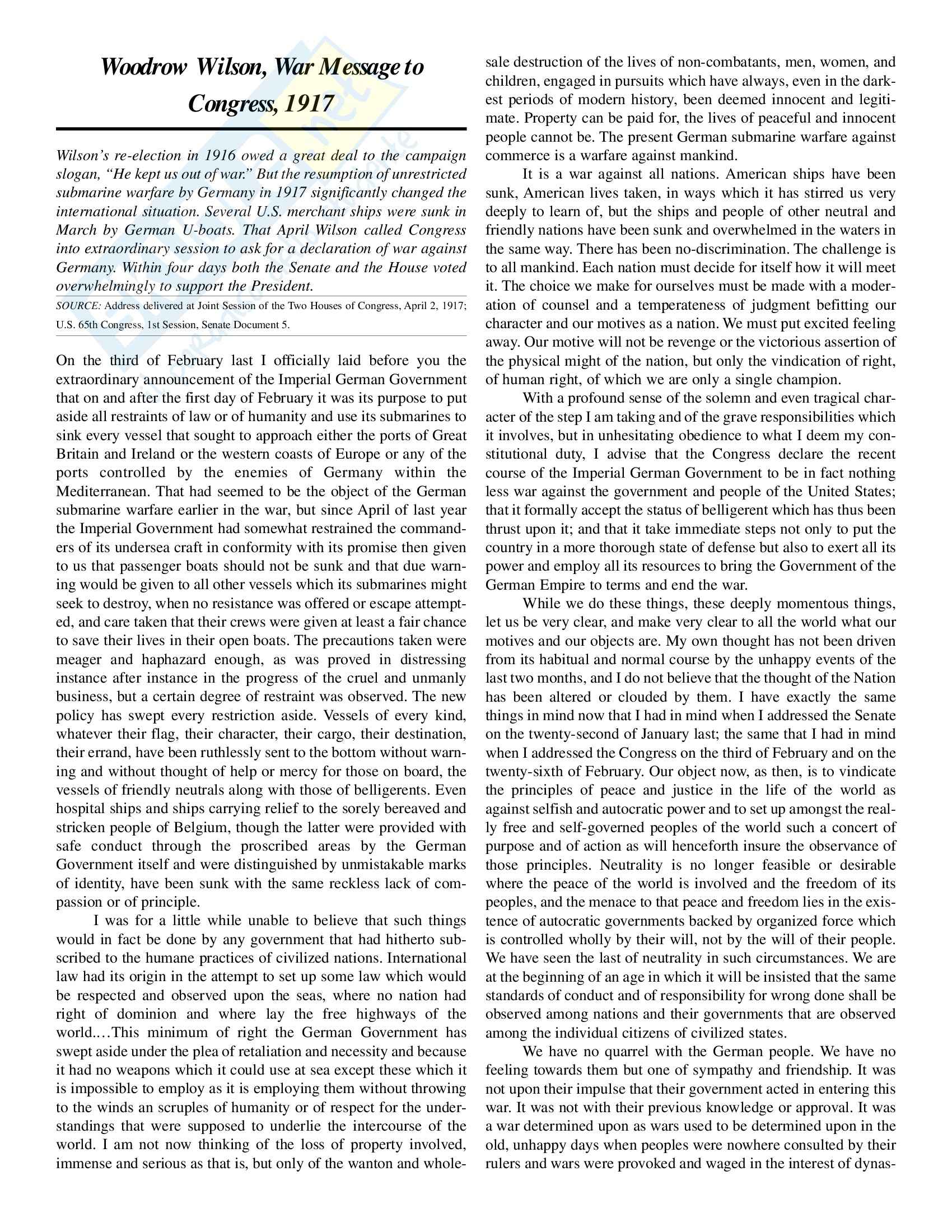 Woodrow Wilson, War Message to sale destruction of the lives of non-combatants, men, women, and

children, engaged in pursuits which have always, even in the dark-

mate. Property can be paid for, the lives of peaceful and innocent

people cannot be. The present German submarine warfare against

Wilson’s re-election in 1916 owed a great deal to the campaign commerce is a warfare against mankind.

slogan, “He kept us out of war.” But the resumption of unrestricted It is a war against all nations. American ships have been

submarine warfare by Germany in 1917 significantly changed the sunk, American lives taken, in ways which it has stirred us very

international situation. Several U.S. merchant ships were sunk in deeply to learn of, but the ships and people of other neutral and

March by German U-boats. That April Wilson called Congress friendly nations have been sunk and overwhelmed in the waters in

into extraordinary session to ask for a declaration of war against the same way. There has been no-discrimination. The challenge is

Germany. Within four days both the Senate and the House voted to all mankind. Each nation must decide for itself how it will meet

overwhelmingly to support the President. it. The choice we make for ourselves must be made with a moder-

ation of counsel and a temperateness of judgment befitting our

SOURCE: Address delivered at Joint Session of the Two Houses of Congress, April 2, 1917; character and our motives as a nation. We must put excited feeling

U.S. 65th Congress, 1st Session, Senate Document 5. away. Our motive will not be revenge or the victorious assertion of

On the third of February last I officially laid before you the the physical might of the nation, but only the vindication of right,

extraordinary announcement of the Imperial German Government of human right, of which we are only a single champion.

sink every vessel that sought to approach either the ports of Great it involves, but in unhesitating obedience to what I deem my con-

Britain and Ireland or the western coasts of Europe or any of the stitutional duty, I advise that the Congress declare the recent

Mediterranean. That had seemed to be the object of the German less war against the government and people of the United States;

submarine warfare earlier in the war, but since April of last year that it formally accept the status of belligerent which has thus been

the Imperial Government had somewhat restrained the command- thrust upon it; and that it take immediate steps not only to put the

ing would be given to all other vessels which its submarines might German Empire to terms and end the war.

seek to destroy, when no resistance was offered or escape attempt- While we do these things, these deeply momentous things,

ed, and care taken that their crews were given at least a fair chance let us be very clear, and make very clear to all the world what our

to save their lives in their open boats. The precautions taken were motives and our objects are. My own thought has not been driven

meager and haphazard enough, as was proved in distressing from its habitual and normal course by the unhappy events of the

instance after instance in the progress of the cruel and unmanly last two months, and I do not believe that the thought of the Nation

business, but a certain degree of restraint was observed. The new has been altered or clouded by them. I have exactly the same

policy has swept every restriction aside. Vessels of every kind, things in mind now that I had in mind when I addressed the Senate

whatever their flag, their character, their cargo, their destination, on the twenty-second of January last; the same that I had in mind

their errand, have been ruthlessly sent to the bottom without warn- when I addressed the Congress on the third of February and on the

ing and without thought of help or mercy for those on board, the twenty-sixth of February. Our object now, as then, is to vindicate

vessels of friendly neutrals along with those of belligerents. Even the principles of peace and justice in the life of the world as

stricken people of Belgium, though the latter were provided with ly free and self-governed peoples of the world such a concert of

Government itself and were distinguished by unmistakable marks those principles. Neutrality is no longer feasible or desirable

of identity, have been sunk with the same reckless lack of com- where the peace of the world is involved and the freedom of its

passion or of principle. peoples, and the menace to that peace and freedom lies in the exis-

would in fact be done by any government that had hitherto sub- is controlled wholly by their will, not by the will of their people.

scribed to the humane practices of civilized nations. International We have seen the last of neutrality in such circumstances. We are

be respected and observed upon the seas, where no nation had standards of conduct and of responsibility for wrong done shall be

world.…This minimum of right the German Government has among the individual citizens of civilized states.

swept aside under the plea of retaliation and necessity and because We have no quarrel with the German people. We have no

it had no weapons which it could use at sea except these which it feeling towards them but one of sympathy and friendship. It was

to the winds an scruples of humanity or of respect for the under- war. It was not with their previous knowledge or approval. It was

world. I am not now thinking of the loss of property involved, old, unhappy days when peoples were nowhere consulted by their

immense and serious as that is, but only of the wanton and whole- rulers and wars were provoked and waged in the interest of dynas- 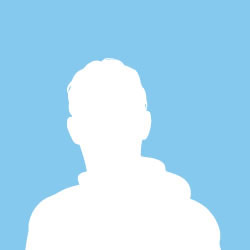 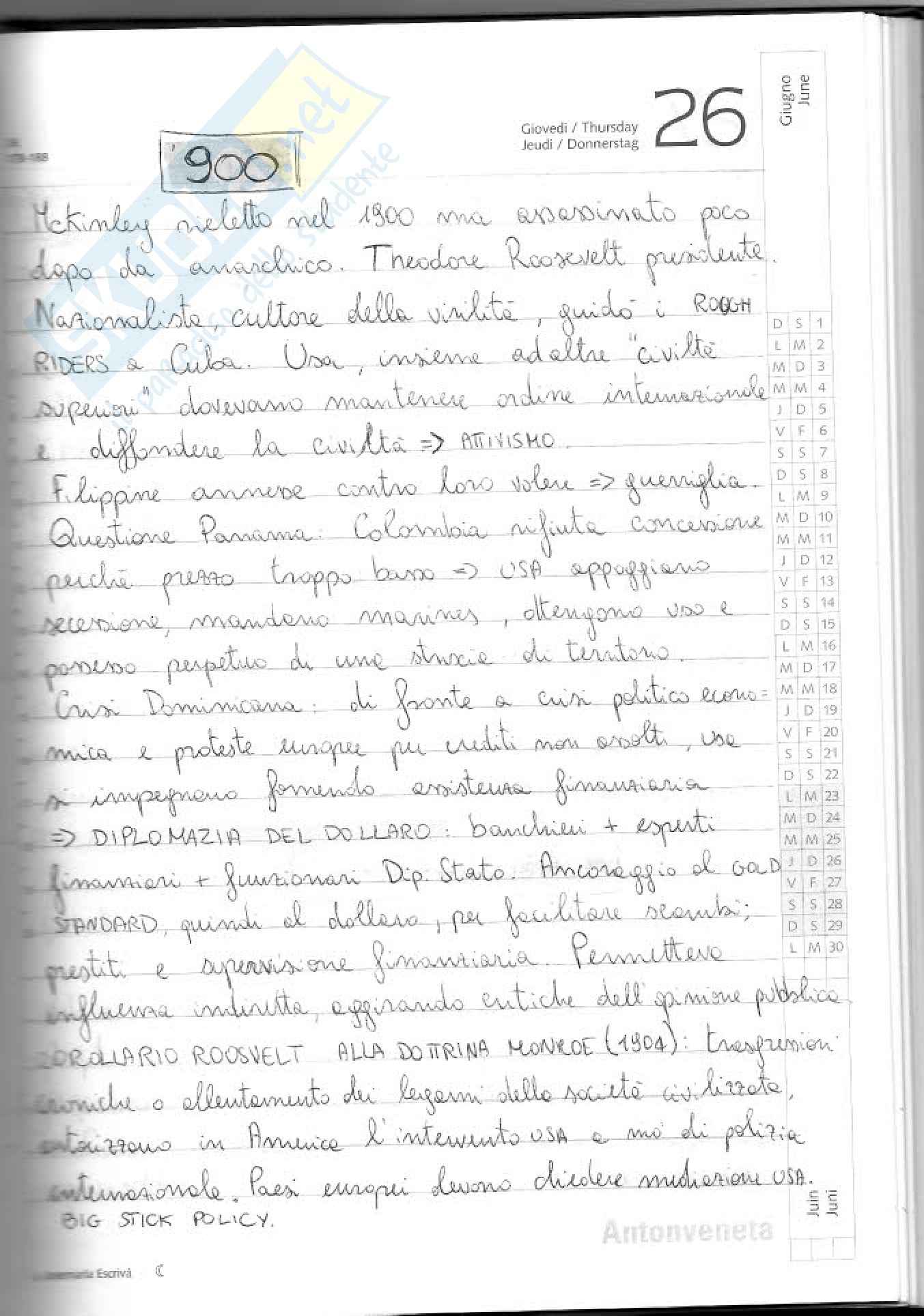 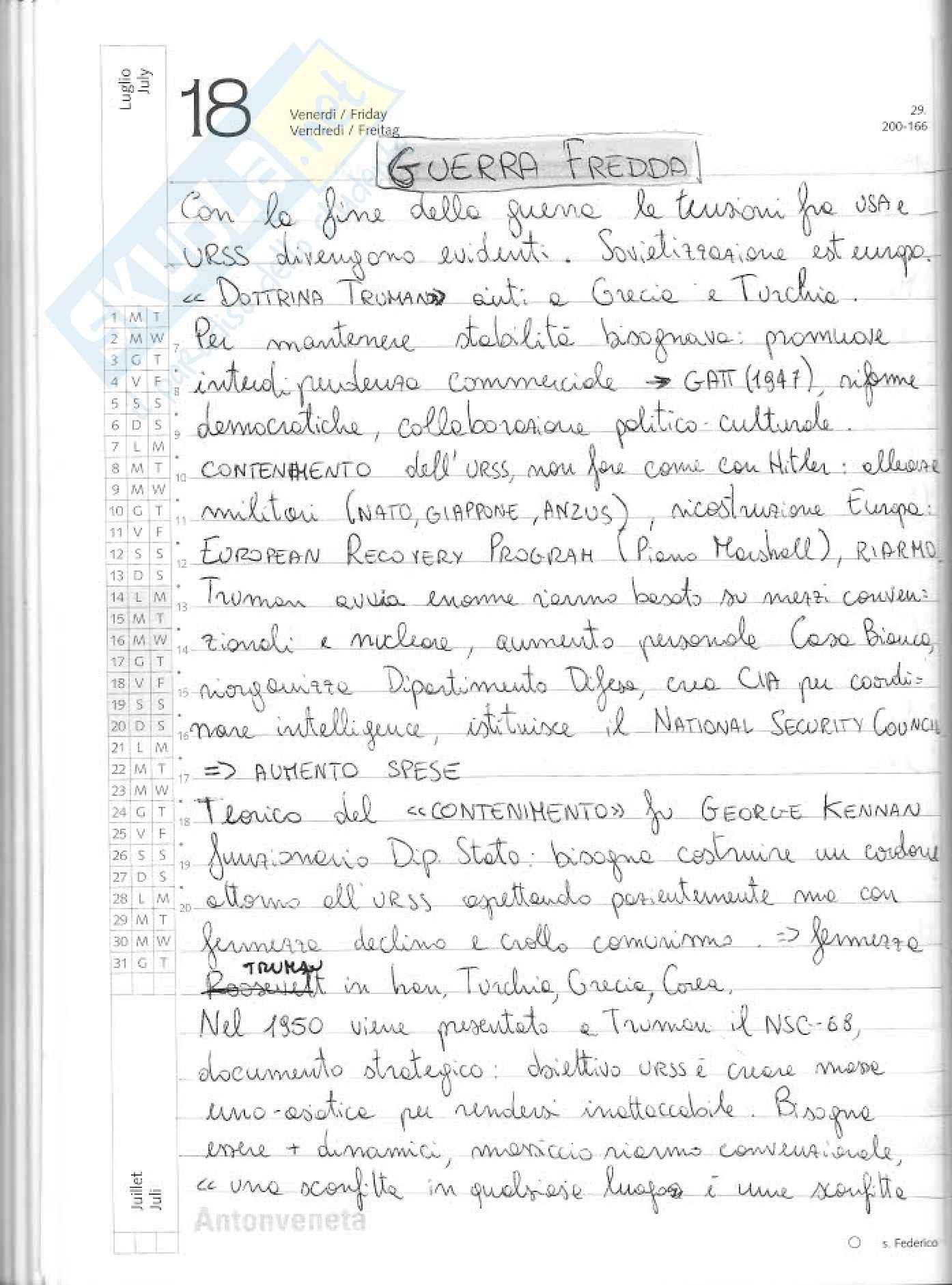 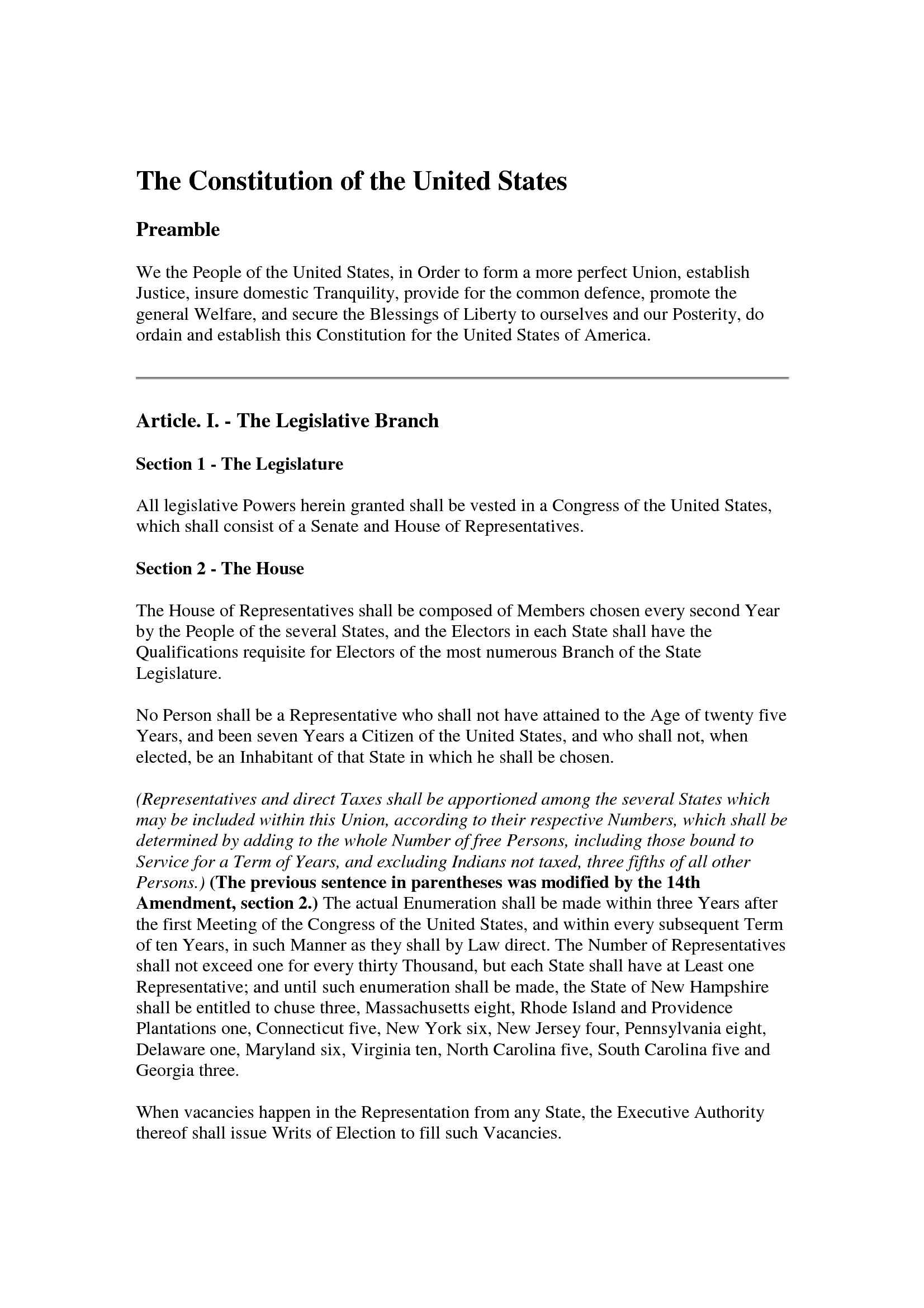 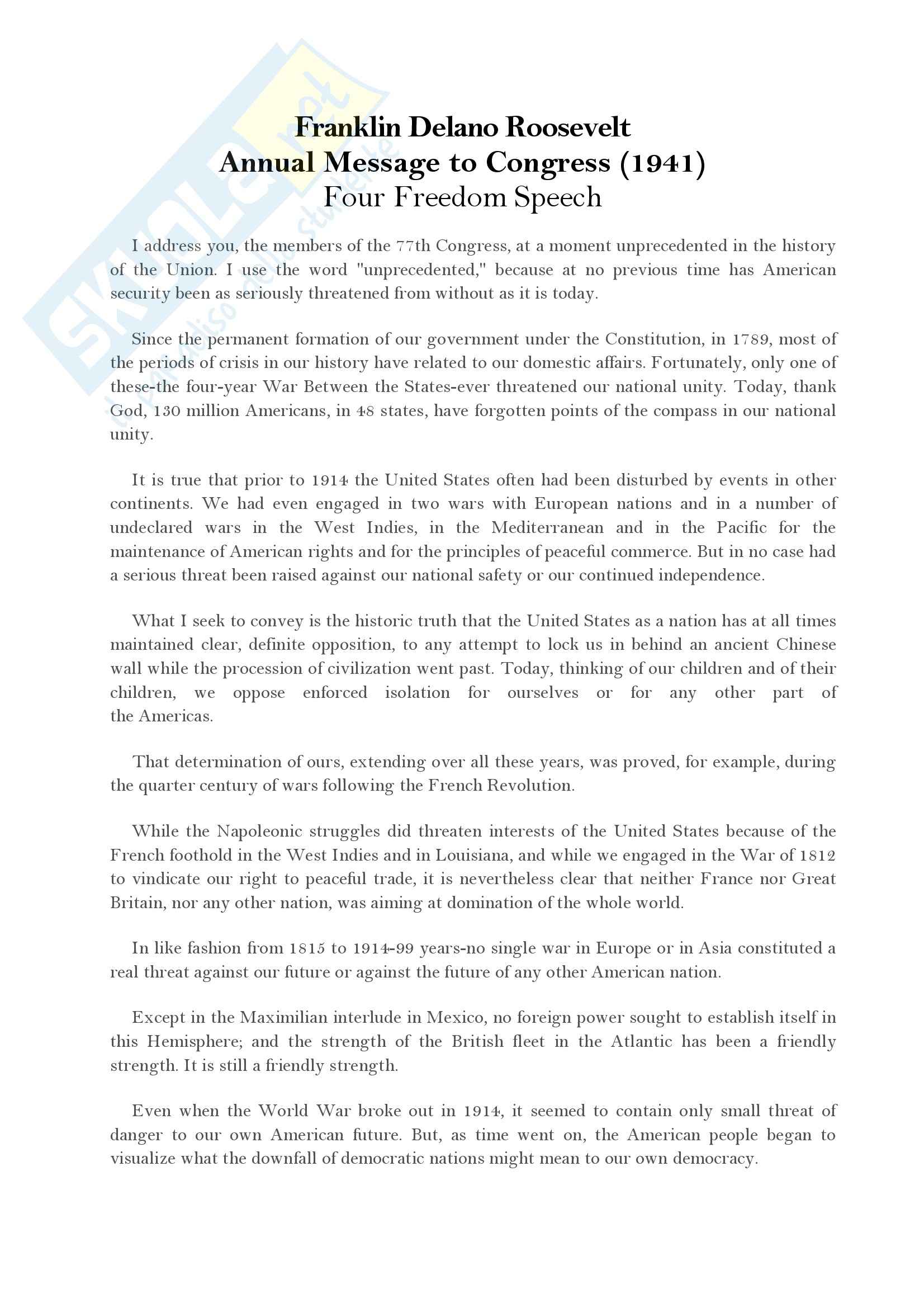