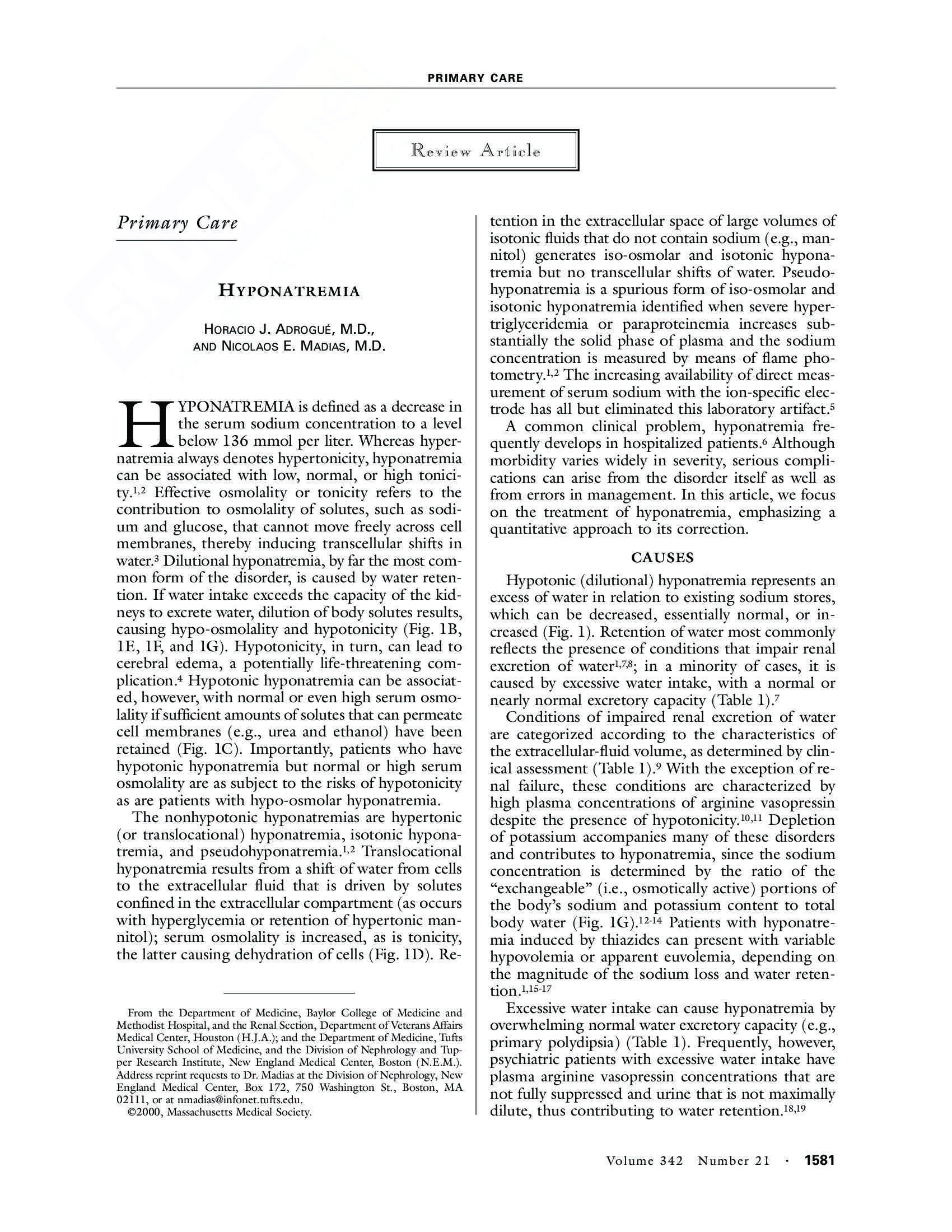 A Hypotonic hyponatremia due to water

retention in the presence of essentially

normal sodium stores (e.g., from the

B syndrome of inappropriate secretion of

Hypertonic hyponatremia due to gain of impermeable

D solutes other than sodium (e.g., from hyperglycemia)

Hypotonic hyponatremia due to water

retention in association with sodium

Hypotonic hyponatremia due to water

retention in association with sodium gain

F (e.g., from the nephrotic syndrome)

Hypotonic hyponatremia due to water retention in

spectively (Panel A). With the syndrome of inappropriate secretion of antidiuretic hormone, the volumes of extracellular fluid and

intracellular fluid expand (although a small element of sodium and potassium loss, not shown, occurs during inception of the syn-

drome) (Panel B). Water retention can lead to hypotonic hyponatremia without the anticipated hypo-osmolality in patients who have

accumulated ineffective osmoles, such as urea (Panel C). A shift of water from the intracellular-fluid compartment to the extracel-

intracellular-fluid compartment. At times, water retention can be sufficient to restore the volume of extracellular fluid to normal or

but predominantly the extracellular-fluid compartment (Panel F). Gain of sodium and loss of potassium in association with a defect

of water excretion, as they occur in congestive heart failure treated with diuretics, lead to expansion of the extracellular-fluid com-

the two compartments represents the cell membrane, and the shading indicates the intravascular volume.

Infection with the human immunodeficiency virus

Sodium-free irrigant solutions (used in hysteroscopy, laparoscopy, or transurethral resection of the

†Often a mild reduction in the capacity for water excretion is also present.

‡Hyponatremia is not always hypotonic.

Hyperglycemia is the most common cause of trans- nal insufficiency, has the same effect. In both condi-

locational hyponatremia (Fig. 1D). An increase of tions, the resultant hypertonicity can be aggravated

100 mg per deciliter (5.6 mmol per liter) in the se- by osmotic diuresis; moderation of hyponatremia or

by approximately 1.7 mmol per liter, with the end the sodium and potassium concentrations in the urine

result a rise in serum osmolality of approximately falls short of that in serum. 20

2.0 mOsm per kilogram of water. Retention of hy- Massive absorption of irrigant solutions that do not

pertonic mannitol, which occurs in patients with re- contain sodium (e.g., those used during transurethral

in psychiatric patients, and transurethral prostatec-

prostatectomy) can cause severe and symptomatic hy- tomy.

ponatremia. Reflecting the composition of the irri- Gastrointestinal fluid loss, ingestion of

gant, the resultant hyponatremia can be either hypo- dilute formula, accidental ingestion of excessive wa-

tonic (with an irrigant containing 1.5 percent glycine ter, and receipt of multiple tap-water enemas are the

or 3.3 percent sorbitol) or isotonic (with an irrigant main causes of severe hyponatremia in infants and

toms derive from the presence of retained solutes, CLINICAL MANIFESTATIONS

the metabolic products of such solutes, hypotonici-

ty, or the low serum sodium concentration itself re- Just as in hypernatremia, the manifestations of hy-

The most common causes of severe hyponatremia tion of the central nervous system, and they are more

in adults are therapy with thiazides, the postoperative conspicuous when the decrease in the serum sodium

state and other causes of the syndrome of inappro- concentration is large or rapid (i.e., occurring within a

(slow correction of the

Figure 2. Effects of Hyponatremia on the Brain and Adaptive Responses.

Within minutes after the development of hypotonicity, water gain causes swelling of the brain and a decrease in osmolality of the

brain. Partial restoration of brain volume occurs within a few hours as a result of cellular loss of electrolytes (rapid adaptation). The

tion). Low osmolality in the brain persists despite the normalization of brain volume. Proper correction of hypotonicity reestablishes

normal osmolality without risking damage to the brain. Overly aggressive correction of hyponatremia can lead to irreversible brain

triggers demyelination of pontine and extrapontine

cle cramps, lethargy, restlessness, disorientation, and neurons that can cause neurologic dysfunction, in-

depressed reflexes can be observed. Whereas most cluding quadriplegia, pseudobulbar palsy, seizures,

ing 125 mmol per liter are asymptomatic, those with pletion, and malnutrition increase the risk of this com-

lower values may have symptoms, especially if the plication.

arrest, brain-stem herniation, and death. These com- The optimal treatment of hypotonic hyponatremia

in patients who are essentially euvolemic (e.g., those those of therapy. The presence of symptoms and

recovering from surgery or those with primary poly- their severity largely determine the pace of correction.

This process of adap-

tation by the brain accounts for the relatively asymp- induced expansion of the extracellular-fluid volume.

the source of the risk of osmotic demyelination. rection of hyponatremia, as do ongoing dermal and

Although rare, osmotic demyelination is serious and respiratory fluid losses; anticipation of these losses

ment of hyponatremia by any method, including line. Obviously, electrolyte-free water intake must be

Estimate the effect of 1 liter of

+ any infusate on serum Na

1 liter, with the value yielded by the equation in millimoles per liter.

Normally, extracellular and intracellular fluids account for 40 and 60 percent of total body water,

†In addition to its complete distribution in the extracellular compartment, this infusate induces

osmotic removal of water from the intracellular compartment. 1585 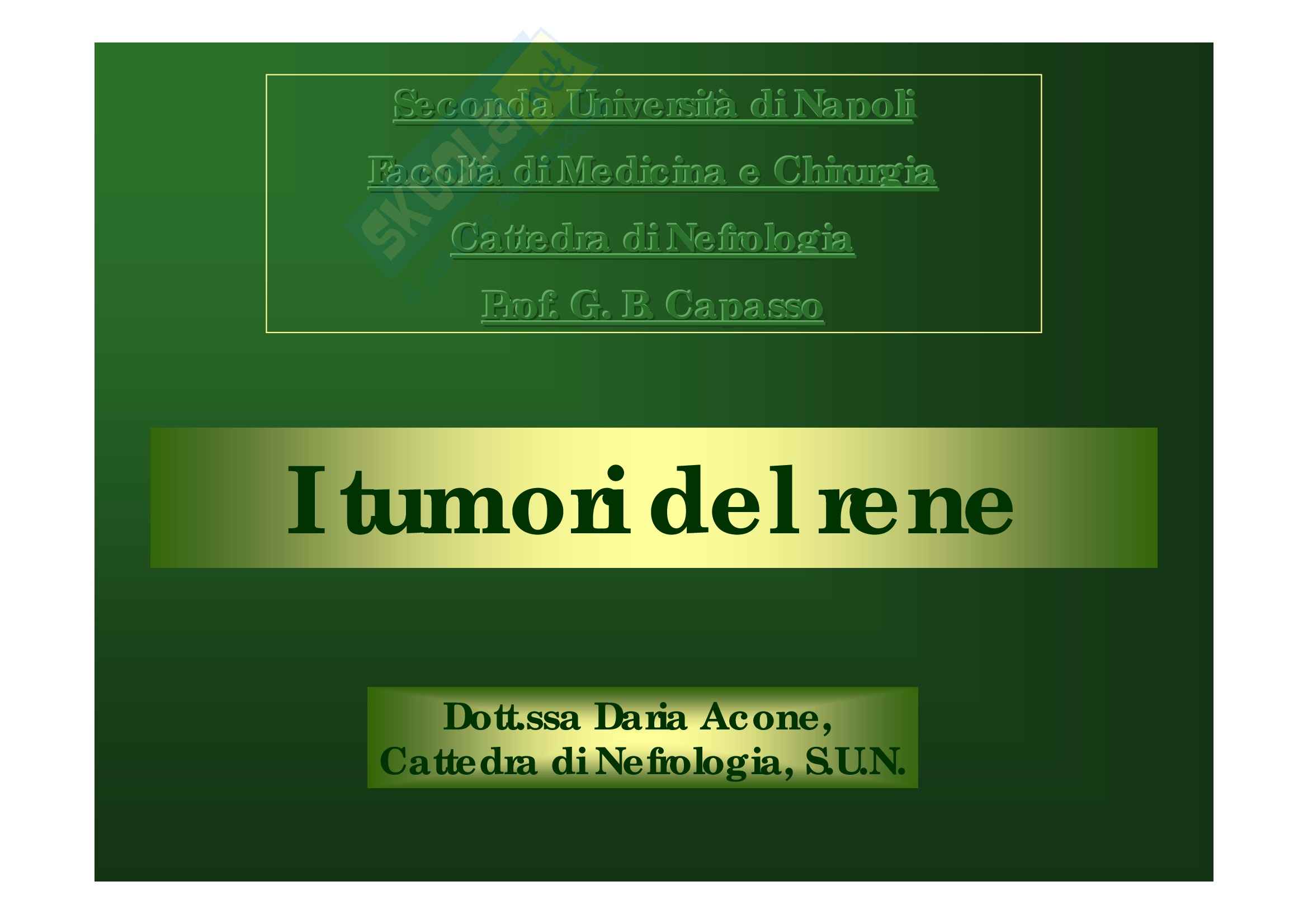 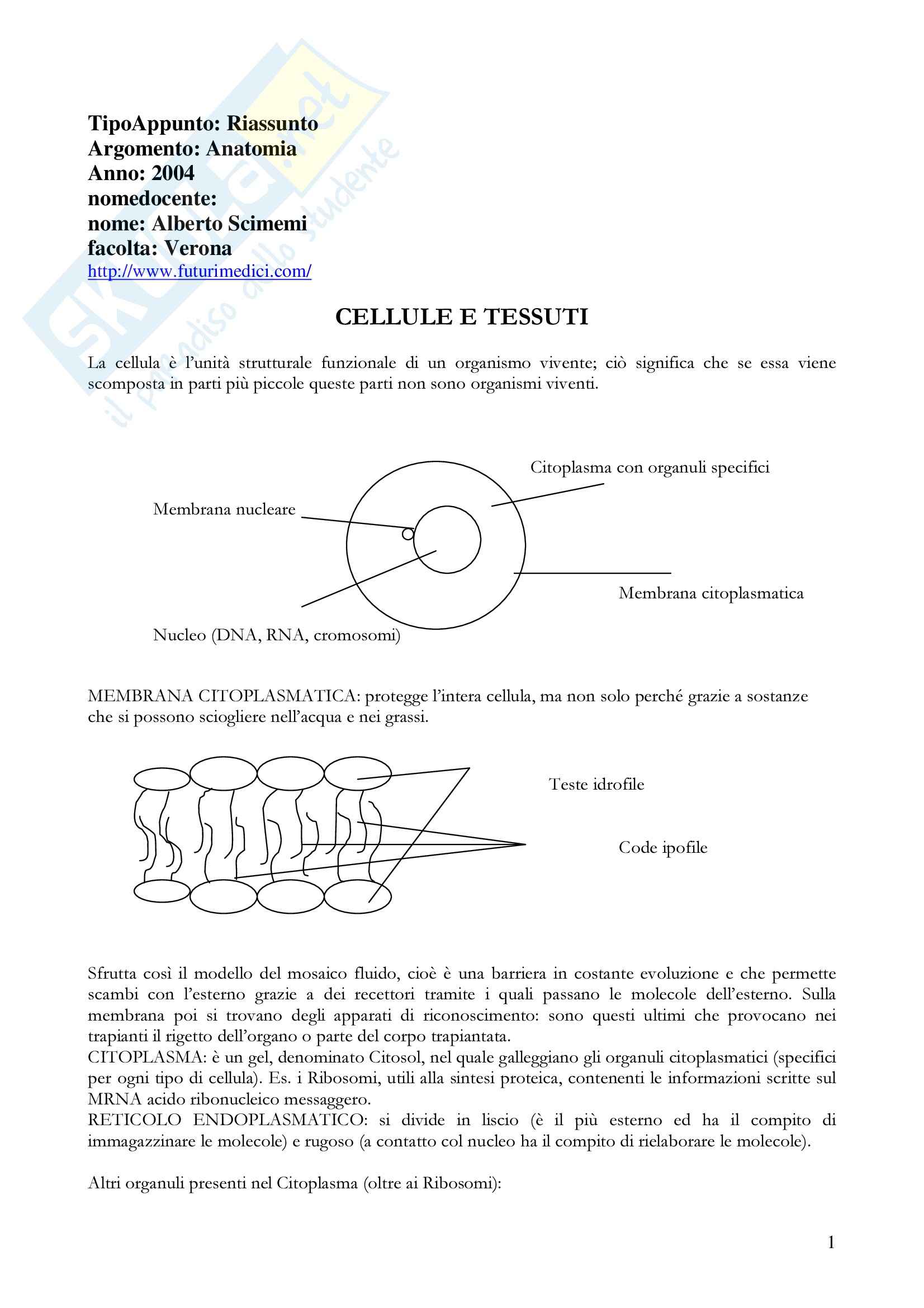 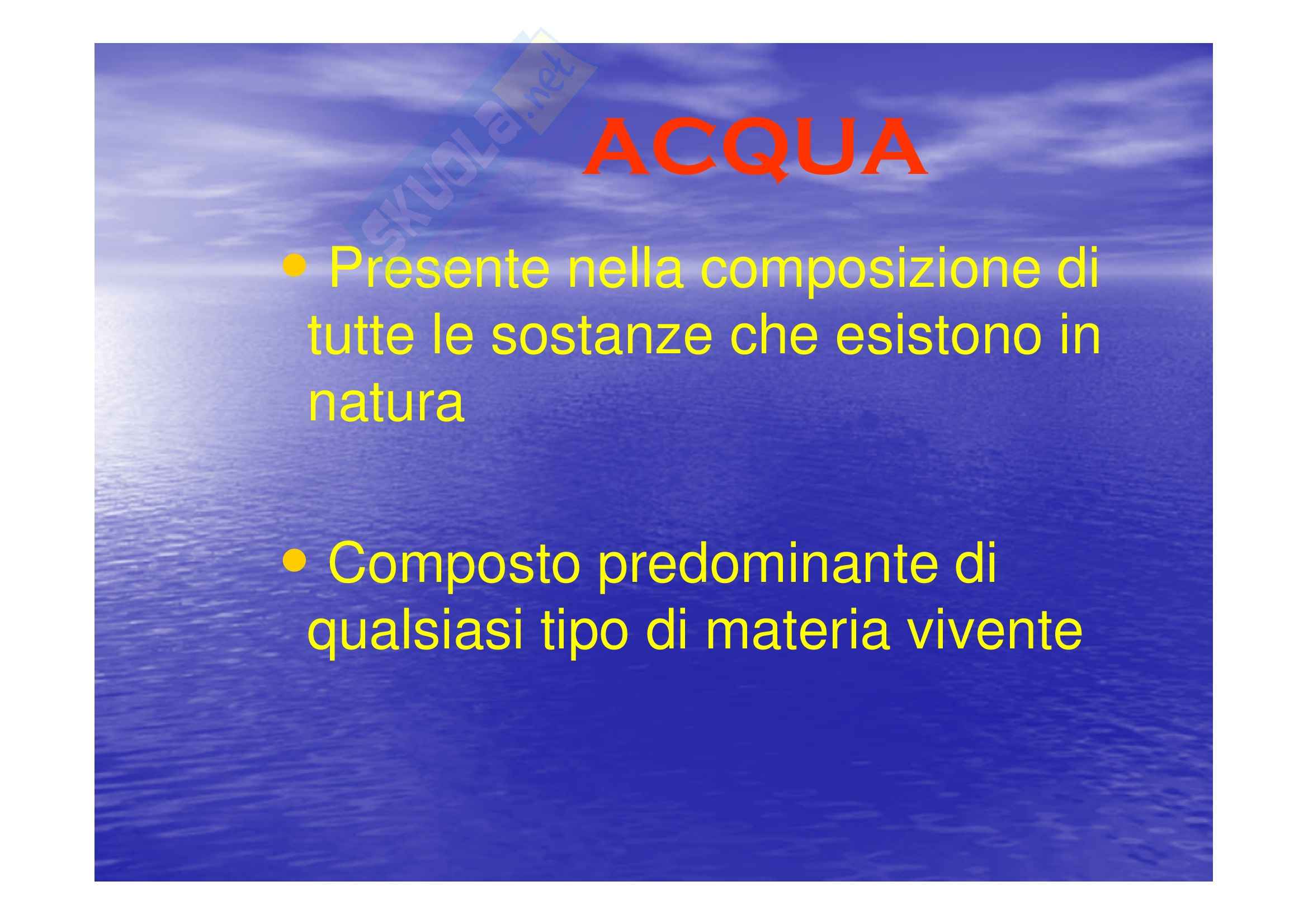 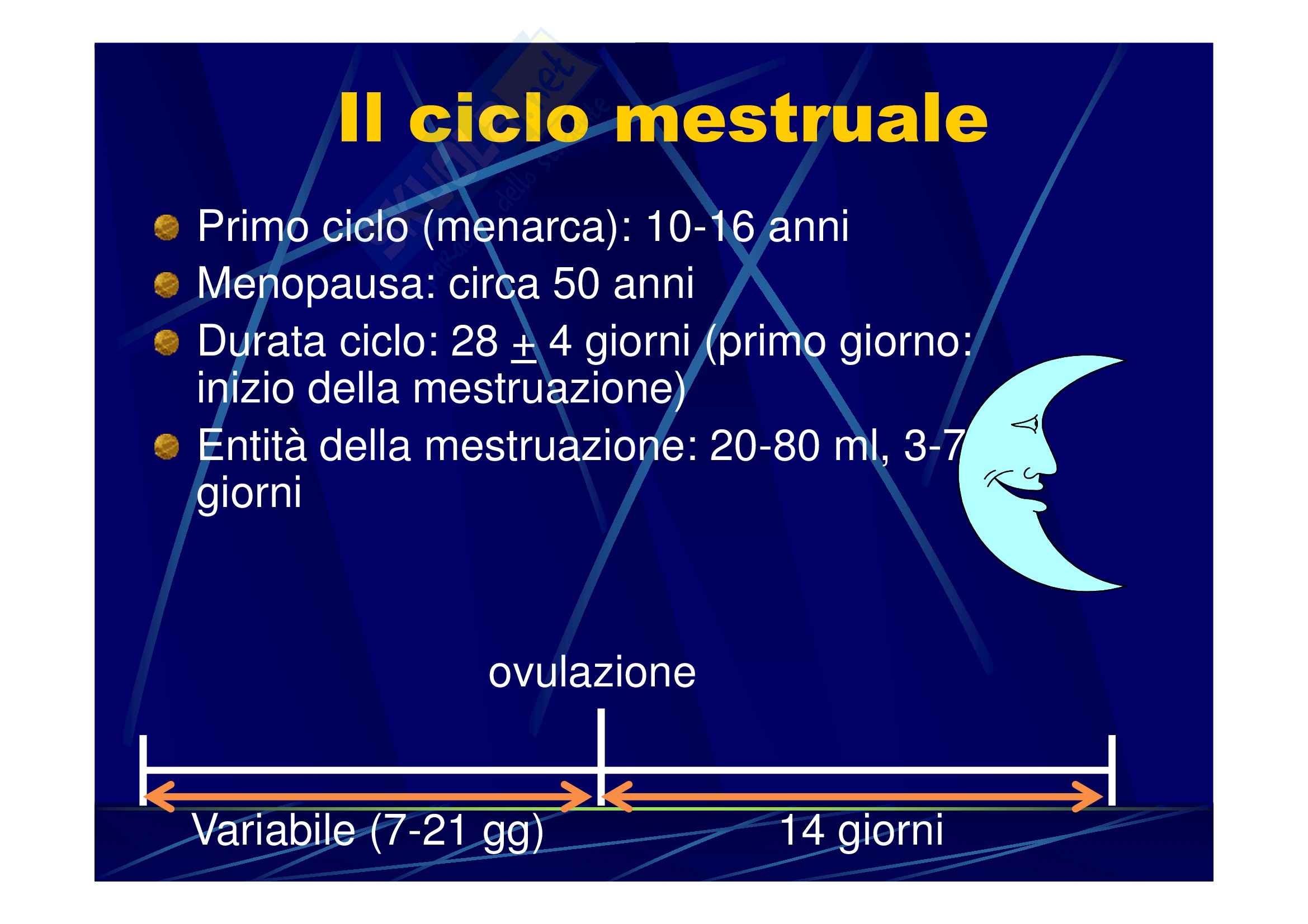 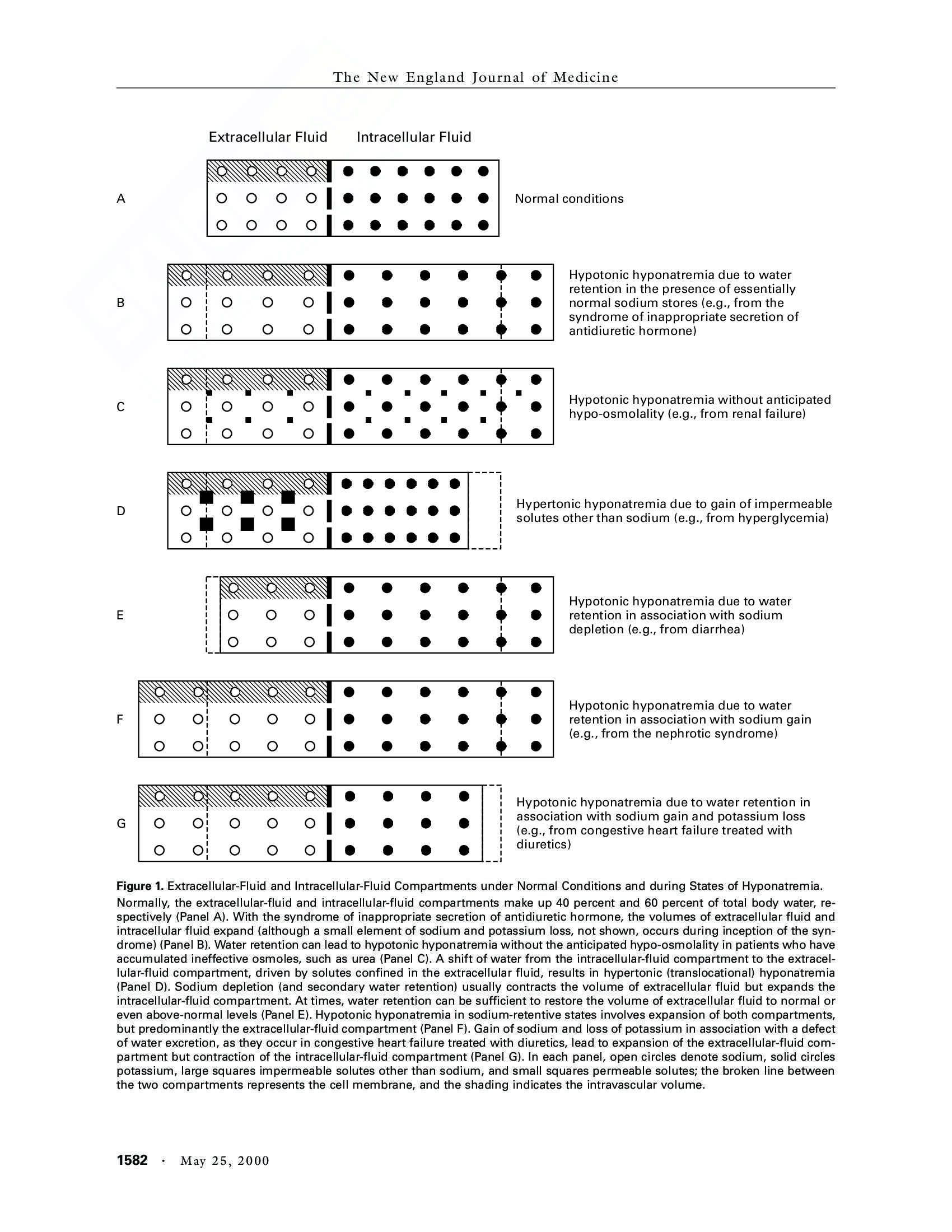 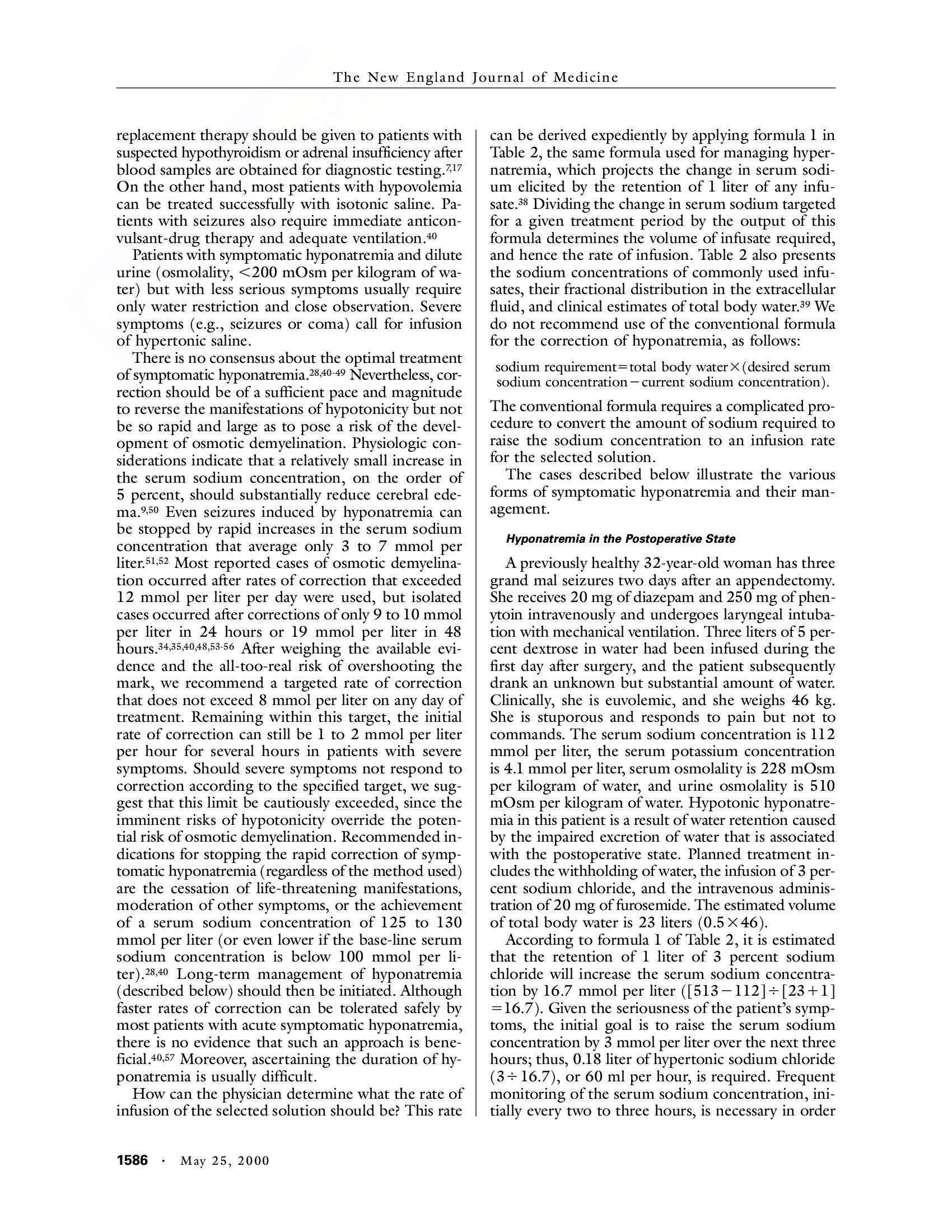