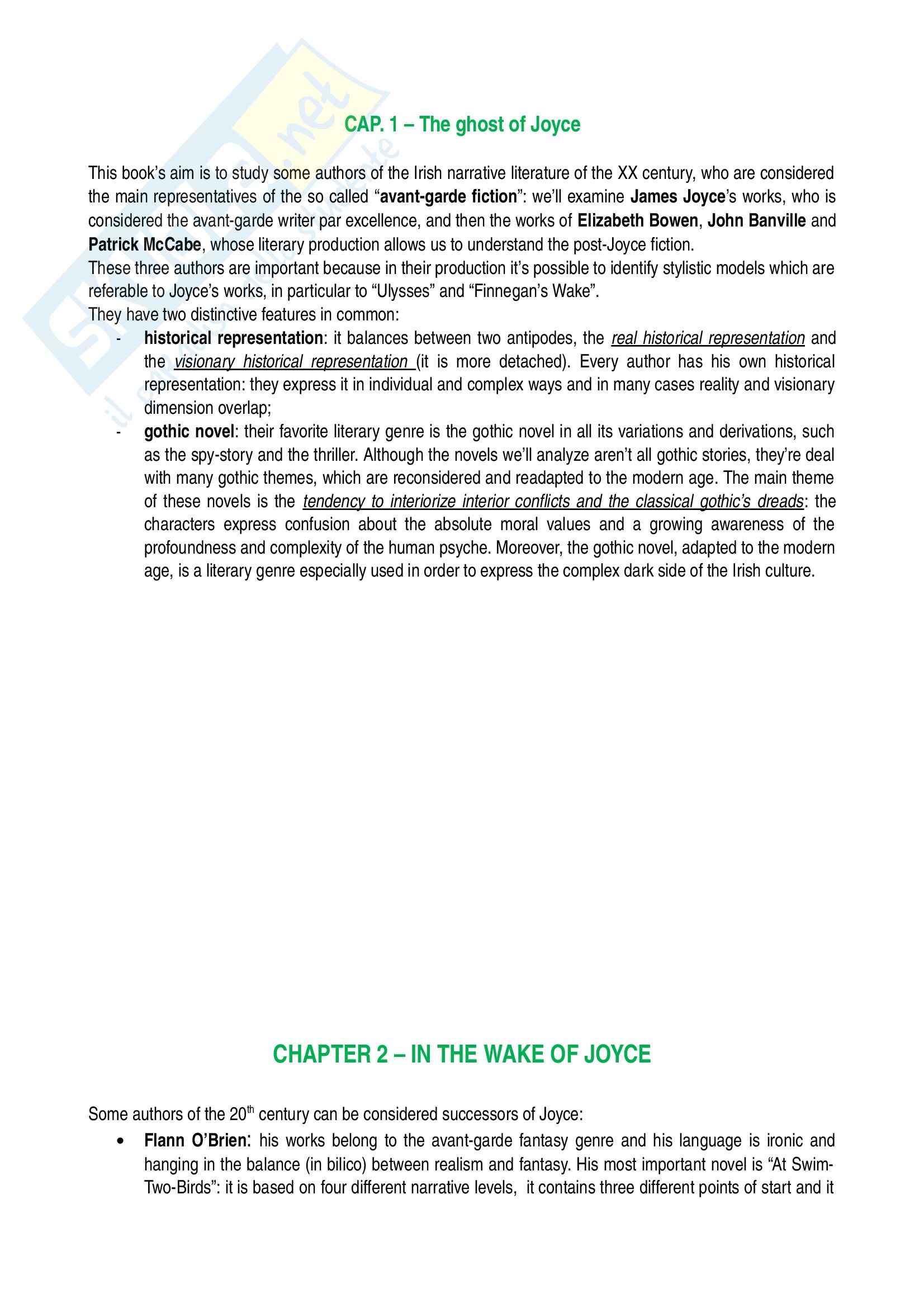 composed of many different styles and genres. This choice depends not only on the refuse to choose

a single form of narration, but also on a world’s view which vacillates and which doesn’t set a clear

bounder between fiction and reality

James Stephens: he is a poet, but also the author of different novels inspired to Irish myths and fairy

• tales. During the 1920s he met Joyce, who didn’t want to complete its “work in progress” (Finnegan’s

Wake): Joyce saw him as the successor of this work (James Joyce & Stephens = John James &

Elizabeth Bowen: chronologically she is the first direct Joyce’s heir and she develops a new form of

Samuel Beckett: he is the most famous, but at the same time the most anguished Joyce’s successor.

• His works are based on the aesthetic of the failure, which is called nihilistic existentialism;

Francis Stuart: he is a “sui generis” author because of his extreme position in literature and ideology.

• He is the author of a trilogy which deals with the topic “dishonor”: “The pillar of cloud”, “Redemption”

and “The flowering cross”.

John Banville: he is a parodist of Joyce’s works and he plays with his works. He is considered an

faithfully the reality. He is the author of the so­called “science tetralogy”, composed of “Doctor

Copernicus”, “Kepler”, “The Newton Letter” and “Mephisto”: it is based on the stories of these

scientists, who aren’t able to find an equivalence between language and reality;

McCabe: his most famous work is “The Bucher’s boy”, whose prose based on the spoken language

• can be connected to the “stream of consciousness”. The main character is in a criminal lunatic asylum:

he commits a murder and tells his story. The story is set in a wild­eyed (allucinata) atmosphere and

the main character, Francie, invents a fairy and surreal dimension. This novel is a sort of noir which

Elizabeth Bowen was born in 1899 in Dublin. Later her parents brought her to Bowen's Court to County Cork

where she spent her summers.

When her father became mentally ill, she and her mother moved to England, but after her mother’s death in

After some time at art school in London, she decided that her talent lay in writing.

She mixed with the (an influential group of associated English writers, intellectuals,

philosophers and artists, who lived, worked and studied together near Bloomsbury during the first half of the

20th century) and married Alan Cameron, an educational administrator who subsequently worked for the BBC.

In 1930 Bowen inherited Bowen's Court, but remained based in England, making frequent visits to Ireland.

When her husband retired, they settled in Bowen’s Court, where Alan Cameron died a few months later.

For years Bowen struggled to keep the house, lecturing in the United States to earn money.

She died of lung cancer in a London hospital in 1973.

Elizabeth Bowen is a complex character, because of her personal life which obliged her to live between two

she was born in family belonging to (terriera)

• world of the literary London,

she attended the especially the Bloomsbury Group.

These two worlds influenced her literally production and especially her personal novel’s experimentation.

uncertainty, fragmentation and the so­called “dislocation”:

Her life was in fact characterized by these

aspects of her life influenced her writing technique, which is in fact fragmented, and her novels, which deal

with all kinds of ambiguity expression, such as material and psychological instability, land’s dispossession and

As regards her Irish origins, she always recognized her “Anglo­Irish Ascendancy” and for all her life she

dwelled in her family house Bowen’s Court, which became the symbol of her personal identity and her works.

As regards instead the literary London, she lived in London during the 1920s: during these years the English

It tells the story of an Irish country house during the war. fragments of

Her favourite writing technique is already clear in this novel, as it is composed of

Heat of the Day”:

• to the Second World War.

mixture of genres and themes,

It is characterized by a such as the spy story, the psychological

thriller, the identity and communication problems, the deads influence on the livings and the

relationship between past and present. st

The story takes place in London and starts on 1 September 1942 and ends almost two years later:

the main character is Stella Rodney, who has a relationship with Robert Kelway. However, their

relationship is troubled by an English spy, who is convinced that Robert is a spy: Harrison, using his

abilities, manages in neutralizing him.

too: the is and represents and the author uses the so called

“blitz a nervous and vigorous language.

explains her view of the she saw the past, the imagination and the memory (ricordo) as a

refuge, which has a comforting power.

Moreover, in this essay she explains the main tendencies of the other authors towards the past:

Some authors recover their authentic past and their childhood: their expression is reinforced

− by the evocative power of literature;

Some authors use the power of the literature to create a past that they hadn’t lived: it isn’t a

• alienation, dislocation, search for consolation in memory and in imagination, obsession with time and

overlapping between reality and imagination. World of Love”

However, it’s necessary to distinguish between “A and the other two novels. It is, in

production was characterized by a happy connection between her history representation, social

awareness and literary style; after the war, Elizabeth started to feel that her writing was unsuitable for

the expression of her feelings and her last two novels express a sense of uneasiness.

who lives in this house is the main character of the story (Fred and Lilia Danby have two daughters,

Jane and Maud, and Lilia’s cousin, Antonia, is the house’s owner, but she lives in London). The most

important point of the story is the recovery of a pack of letter in the attic written by Guy, the beloved

Antonia’s cousin, who died in war and was Lilia’s fiancé. The story is focused on this question: “Who

inhabitants, who are totally influenced by them. gloomy reality,

As regards the atmosphere, the story is set in a dominated by the deceased (defunti),

by their unknown presence and their love which isn’t understandable: the main character is in fact Guy,

a deceased who survives thanks to his letters’ effects on the other characters.

The first sentence of this novel sets the reference to another novel: it contains the title of previous

novel "The heat of the day", but it isn’t a mere quotation, but it is a metaphor for the passionate search

for "world of love" and expresses the heat of desire, love and passion.

Just thinking about Jane, whose desires are literally turned on from the letters of Guy and whose

language is strongly characterized by elements of "heat". However, her desire can’t be satisfied: the

desire is vulnerable to the mysterious and unpredictable effects mysterious of Guy’s letters, which are

able undermine her identity and her actions.

Elizabeth Bowen looks for an own and personal language able to express her interior poetic world: she decides

to writes novels, which are generically called “poetic novels”, but which would be better called “

Elizabeth Bowen, in fact, wants to express her aesthetic experience, but the novel was unsuited to this aim:

she solves this problem realizing a (“the object of the novel

is the non­poetic statement of a poetic truth” – quotation of “Notes on Writing a Novel”).

The term “statement” is connected to a the narration, in fact, doesn’t presents an

it stops on a situation, analysis it and

action which happens in a precise space and at a definite time, but

examines in depth atmospheres, feelings and states of mind.

This narrative technique is similar to Joyce’s epiphany and Virginia Woolf’s “moments of being”. However,

Elizabeth Bowen distances herself from them, because she doesn’t speak about a “temporary” compactness,

but about a situation which is expanded. 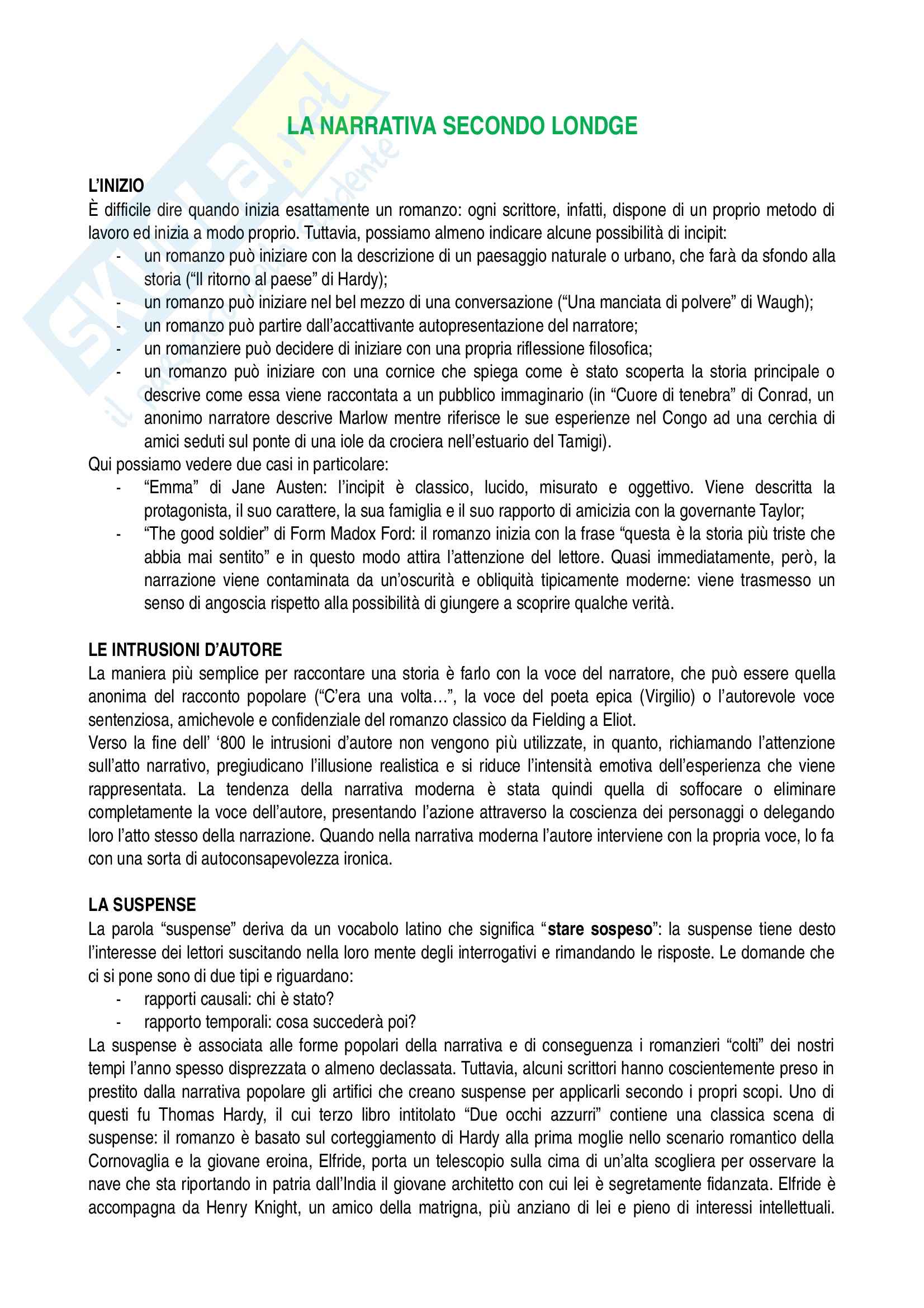 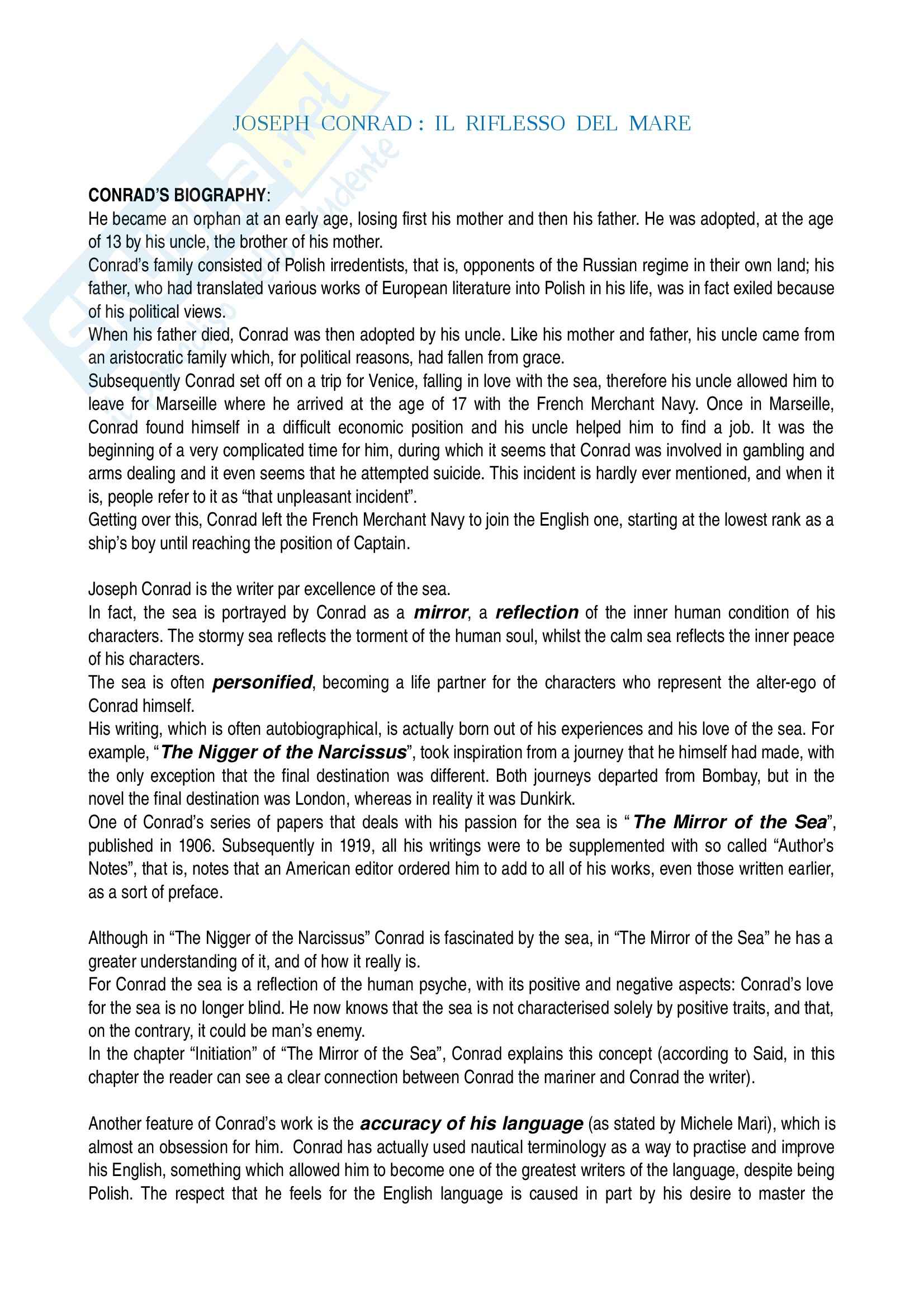 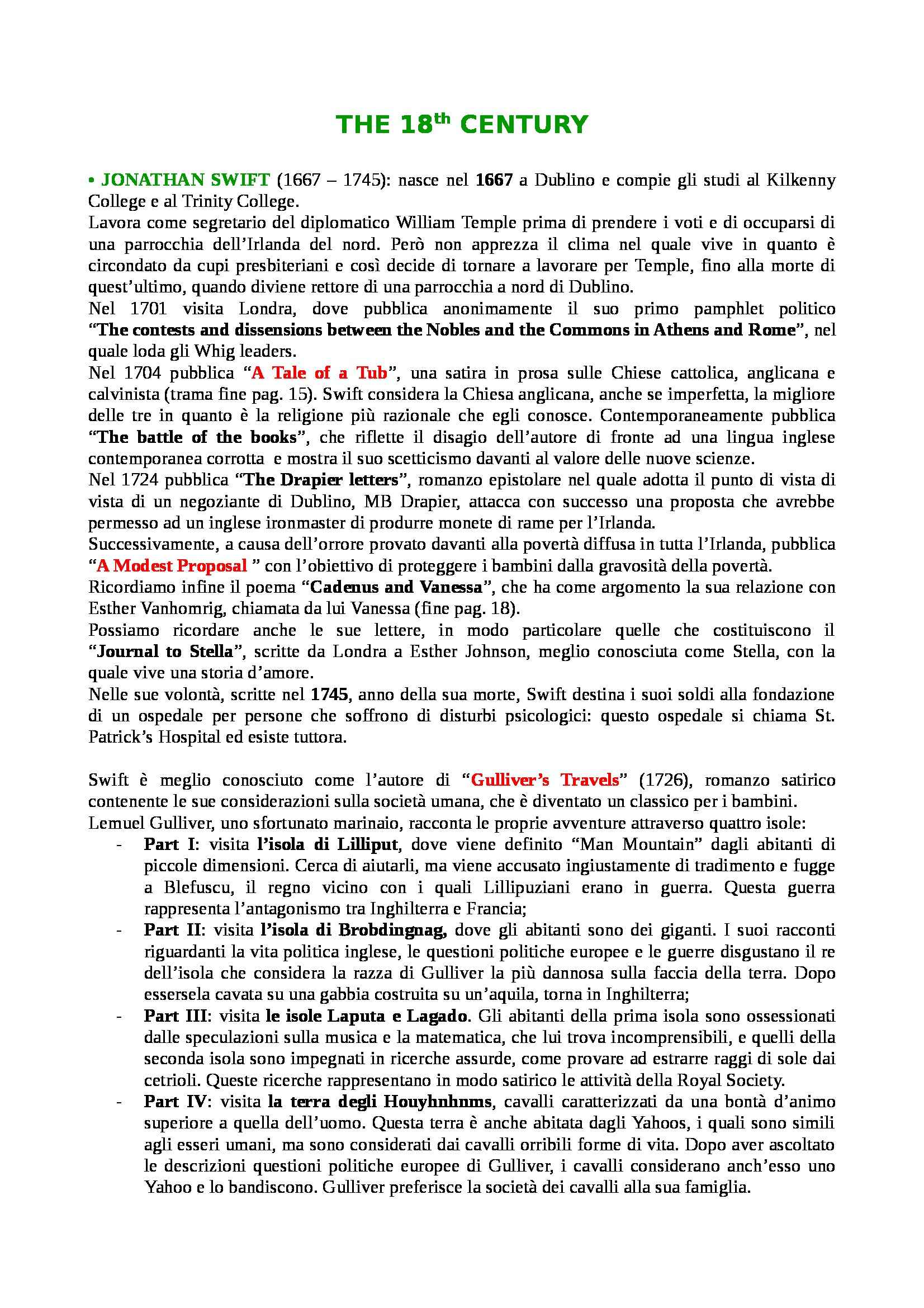 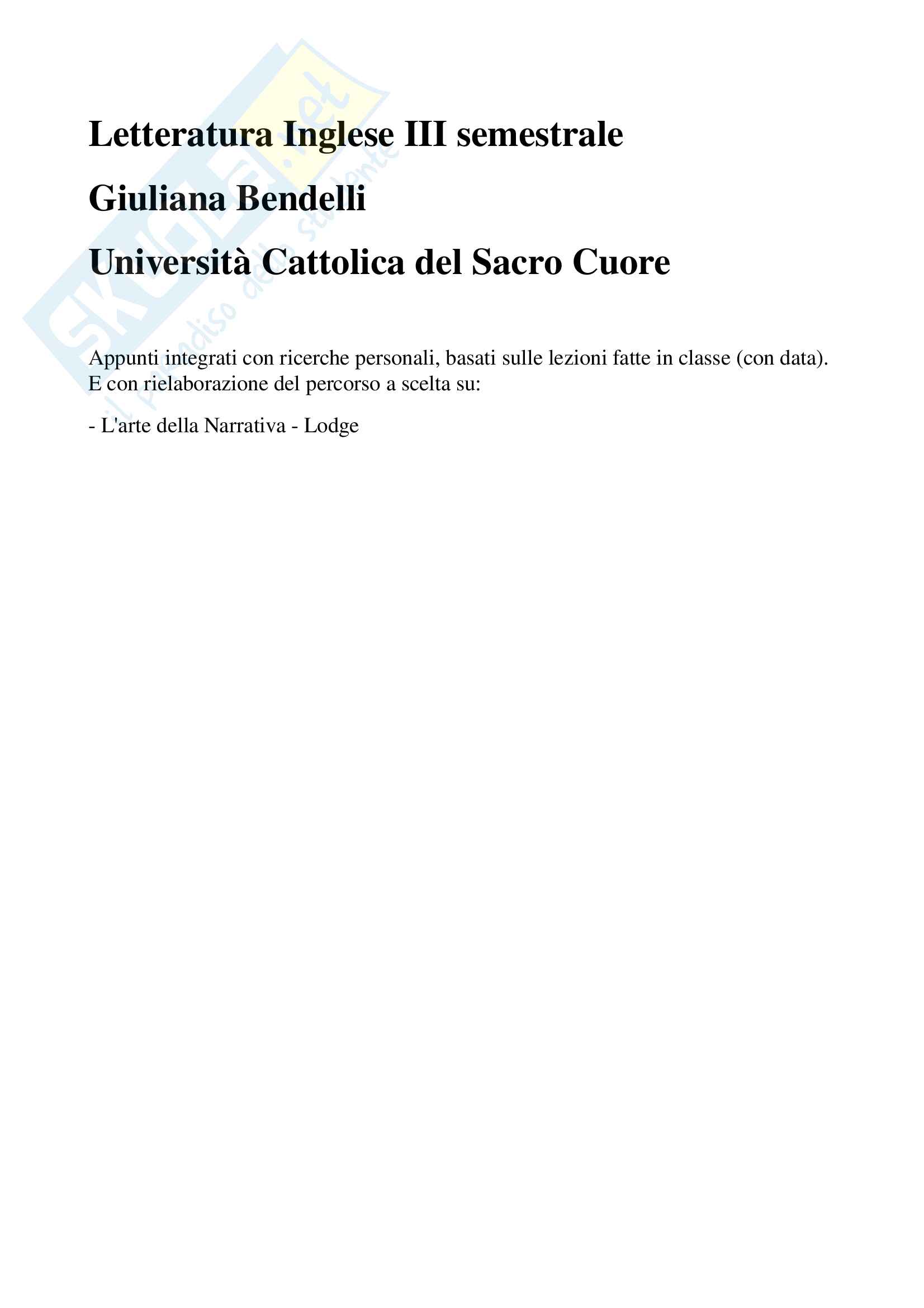 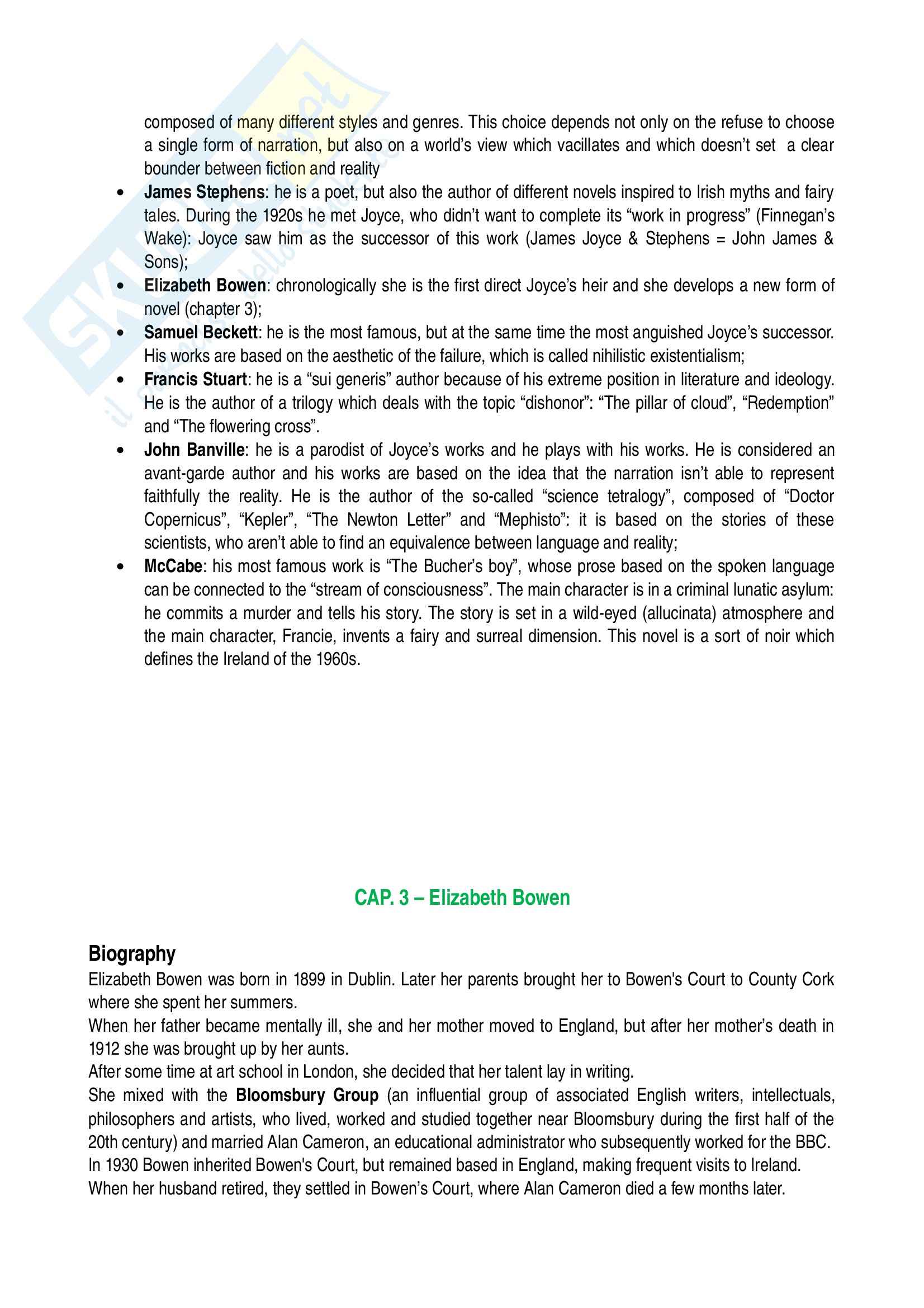 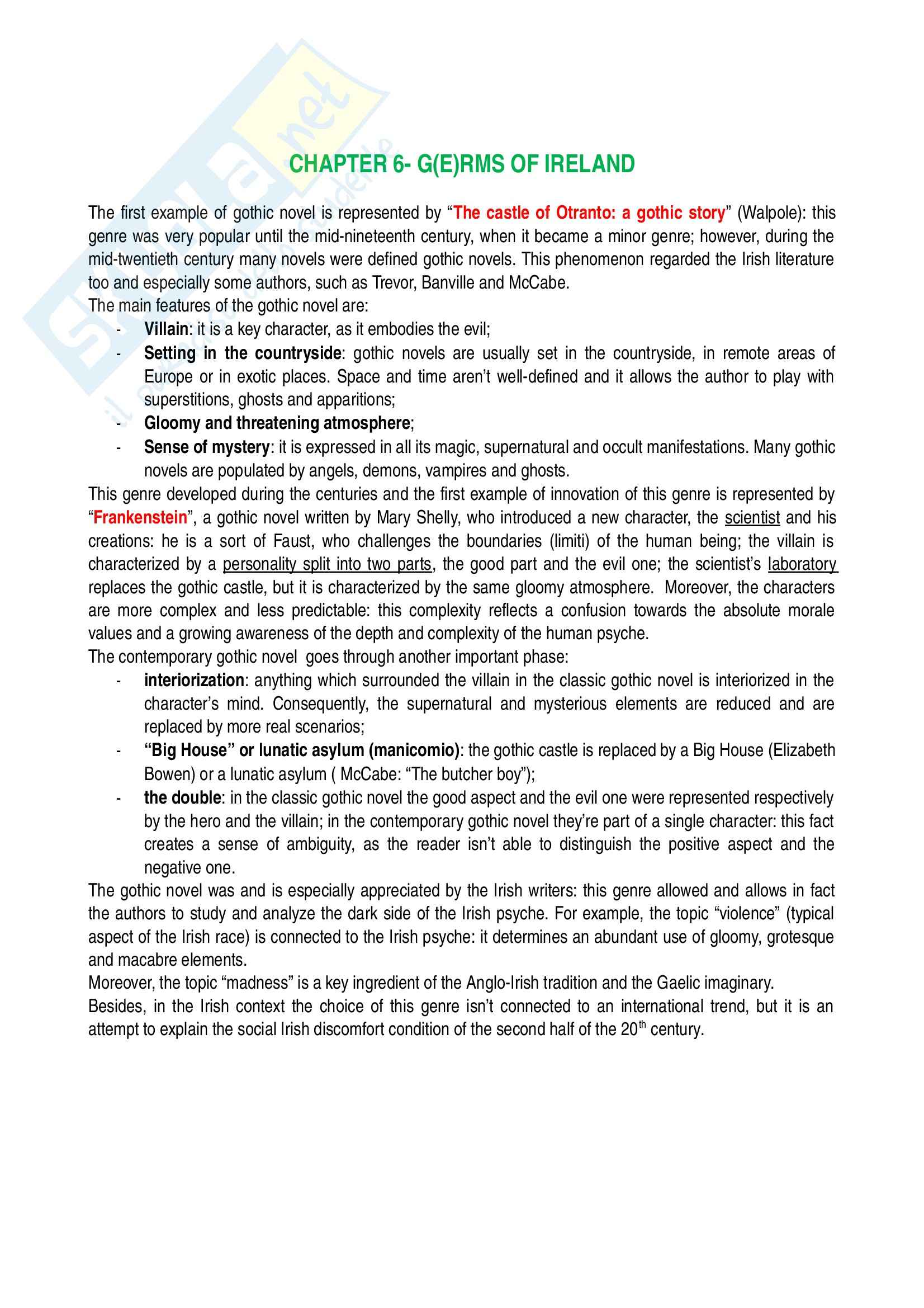