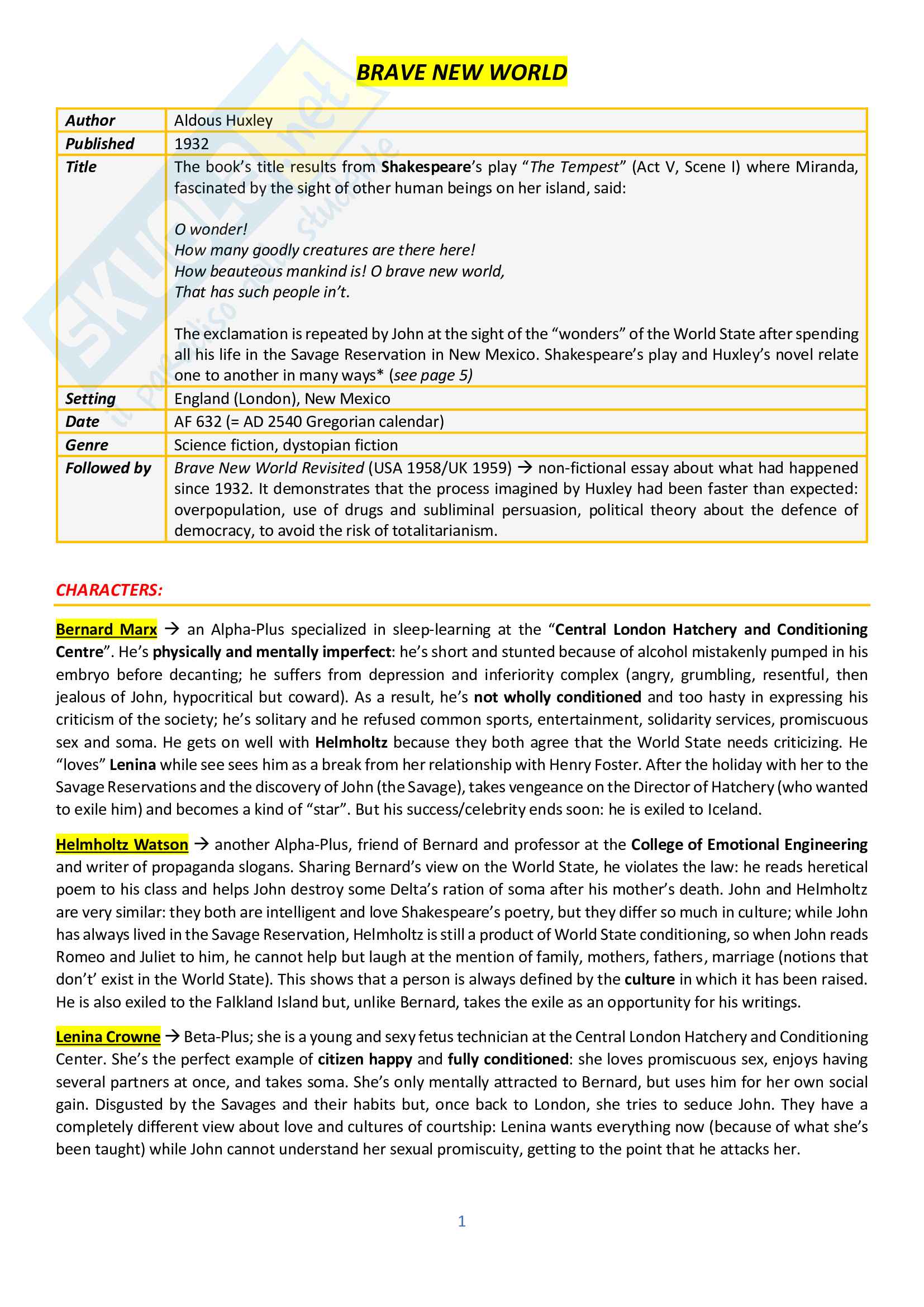 Title The book’s title results from Shakespeare’s play “The Tempest” (Act V, Scene I) where Miranda,

fascinated by the sight of other human beings on her island, said:

How many goodly creatures are there here!

That has such people in’t.

all his life in the Savage Reservation in New Mexico. Shakespeare’s play and Huxley’s novel relate

one to another in many ways* (see page 5)

since 1932. It demonstrates that the process imagined by Huxley had been faster than expected:

overpopulation, use of drugs and subliminal persuasion, political theory about the defence of

democracy, to avoid the risk of totalitarianism.

Centre”. He’s physically and mentally imperfect: he’s short and stunted because of alcohol mistakenly pumped in his

embryo before decanting; he suffers from depression and inferiority complex (angry, grumbling, resentful, then

jealous of John, hypocritical but coward). As a result, he’s not wholly conditioned and too hasty in expressing his

sex and soma. He gets on well with Helmholtz because they both agree that the World State needs criticizing. He

“loves” Lenina while see sees him as a break from her relationship with Henry Foster. After the holiday with her to the

Savage Reservations and the discovery of John (the Savage), takes vengeance on the Director of Hatchery (who wanted

to exile him) and becomes a kind of “star”. But his success/celebrity ends soon: he is exiled to Iceland.

Helmholtz Watson another Alpha-Plus, friend of Bernard and professor at the College of Emotional Engineering

and writer of propaganda slogans. Sharing Bernard’s view on the World State, he violates the law: he reads heretical

poem to his class and helps John destroy some Delta’s ration of soma after his mother’s death. John and Helmholtz

are very similar: they both are intelligent and love Shakespeare’s poetry, but they differ so much in culture; while John

has always lived in the Savage Reservation, Helmholtz is still a product of World State conditioning, so when John reads

Romeo and Juliet to him, he cannot help but laugh at the mention of family, mothers, fathers, marriage (notions that

don’t’ exist in the World State). This shows that a person is always defined by the culture in which it has been raised.

He is also exiled to the Falkland Island but, unlike Bernard, takes the exile as an opportunity for his writings.

Lenina Crowne Beta-Plus; she is a young and sexy fetus technician at the Central London Hatchery and Conditioning

several partners at once, and takes soma. She’s only mentally attracted to Bernard, but uses him for her own social

gain. Disgusted by the Savages and their habits but, once back to London, she tries to seduce John. They have a

completely different view about love and cultures of courtship: Lenina wants everything now (because of what she’s

been taught) while John cannot understand her sexual promiscuity, getting to the point that he attacks her.

Fanny Crowne Beta-Minus. Colleague and friend of Lenina, she is superficial and a perfectly conditioned citizen.

Henry Foster Alpha-Plus. One of Lenina’s many lovers which arouses Bernard’s jealousy, but unable to defend her

Benito Hoover one of Lenina’s many lovers.

John (the Savage) he is the son of Linda and Thomas “Tomakin” (Director of the Hatcheries). He was born and

raised by his mother in the Savage Reservation who taught him to read, but marginalized by the “savages” who

consider Linda as prostitute (she has lived in the World State once) but however sexually exploiting her. John is deeply

influenced by Shakespeare’s works, which represent his only experience of life: they enable him to live his own version

of emotions and reactions and provide him a language that will use in the everyday life. Eager to see the “brave new

world” his mother always told him, he accepts the invitation to travel back to London with Bernard and Lenina. He is

both attracted and repelled by Lenina, not understanding her ideals of romanticism, behavior and feelings. After his

mother’s death, he becomes depressed and violent; he cuts himself off from London’s society to purify himself, but

Linda Beta-Minus. Mother of John, she used to live in the World State. She remained in the Reservation after a

visiting the place several years before, when she lost her group and was left alone; she accidentally become pregnant

by a man of the group (later known as Thomas); she could not return home because of that shame. She and her son

are marginalized by the Savages because Linda, being still a product of the World State, is open to every man and to

all sexual advances; she will be treated as a whore, but still exploited by the people. Once back to the World State with

John, she will be hospitalized and spend her time taking soma until her death.

The Savages people who lives in the Savage Reservation. They belong to the “past”, meaning that are born

naturally, still live in family with mothers and fathers, suffer from diseases and aging, have language and religion.

of John. Not very happy with Bernard’ views toward the World State, warns him that he will be exiled. The situation

changes when Bernard and Lenina are back from New Mexico with Linda and his son. John recognized in him his father

and covered with shame, he obliged to resign.

Mustapha Mond Alpha Plus. He’s the Resident World Controller of Western Europe (one of the ten Controllers).

He is very educated (reads Shakespeare and the Bible), but cunning and cynical: to maintain the founding principles

“Community, Identity, Stability” and to secure the ultimate utilitarian goal of maximizing happiness, he is against

culture, art, literature and scientific freedom. During a conversation with John, he explains to him why the World State

Darwin Bonaparte photographer and film maker. He secretly records John flogging himself and posts the video,

attracting people and tourists arriving to see him.

Popé one of the man who exploits Linda sexually. Hated by John, who tries to kill him, gives Linda a book of

predictability, disposable goods, consumption and consumerism. He is the Messiah/God of the World State, because

it gave the name to the new era and new calendar. In fact, the “Ford religion” has replaced traditional religion:

 Ford is the Creator of Brave New World society; 2 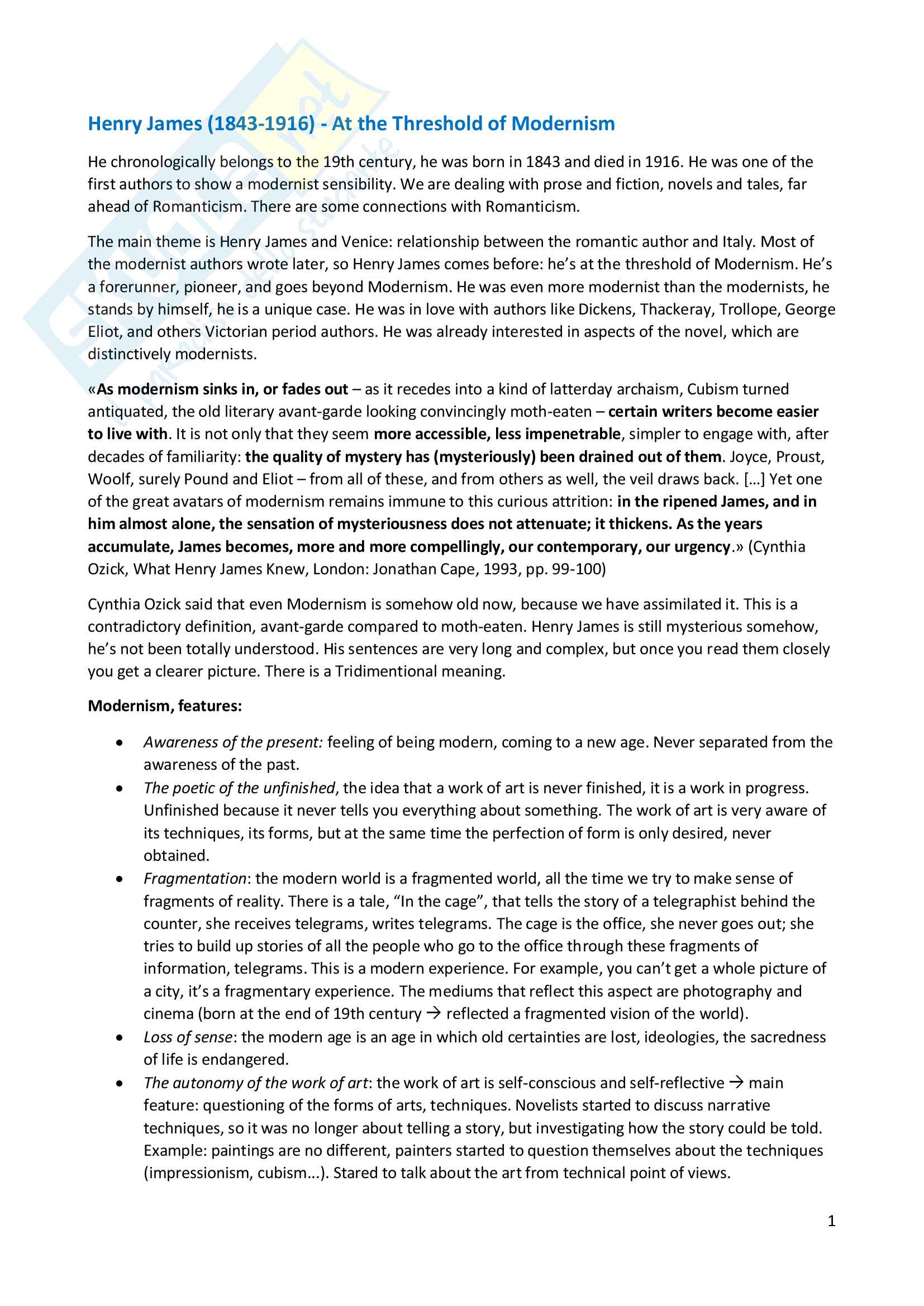 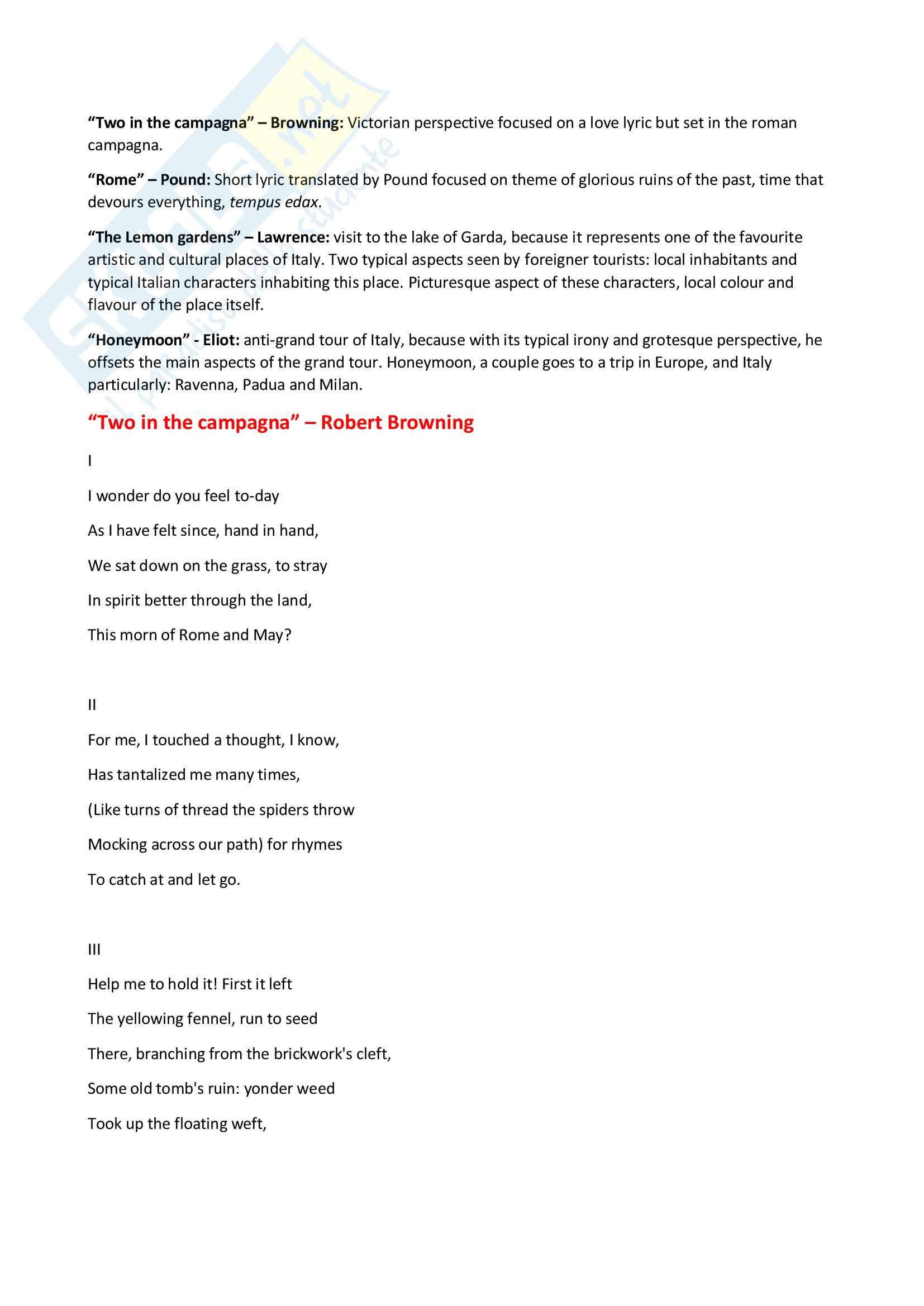 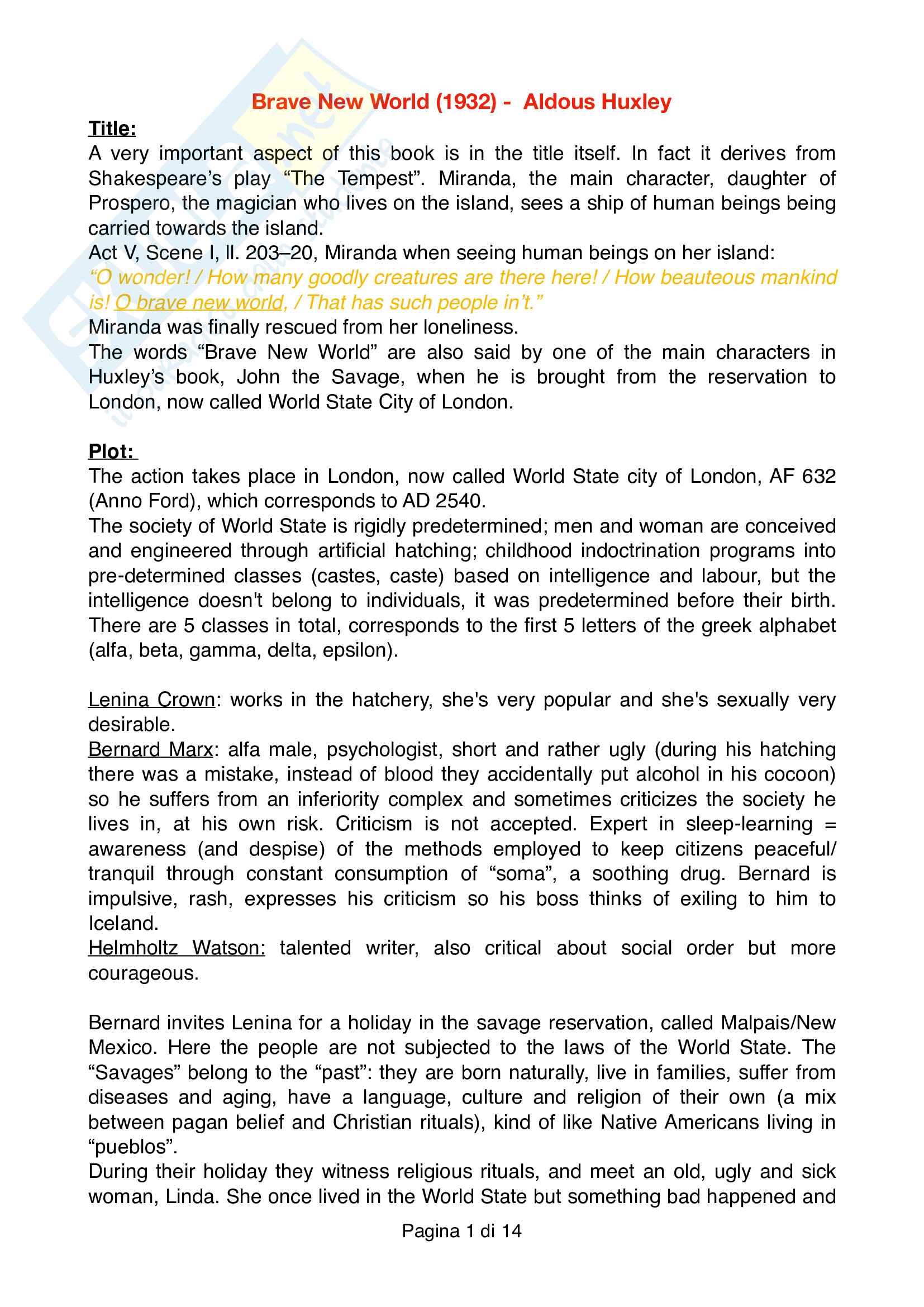 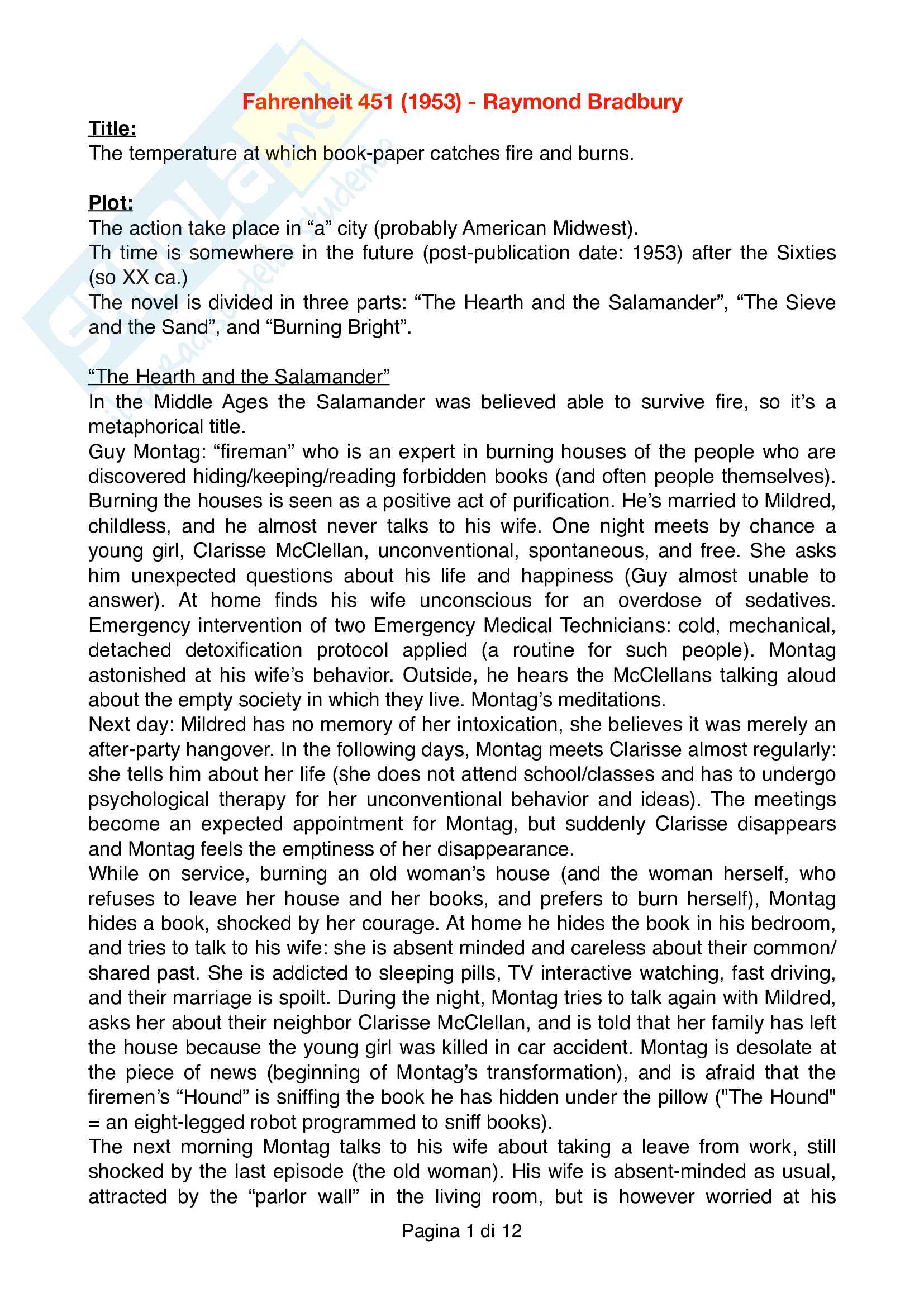