di Trustnt1
Ominide 50 punti
THE VICTORIAN COMPROMISE – VICTORIAN AGE
Early Victorian Period (1832-1848): William IV emanated the Reform Bill in 1832 in which the right of vote was extended to some citizens of the middle classes. In 1833 slavery was abolished in all dominions. The word Victorian derives from Queen Victoria who ruled for more than half a century, from 1837 to 1901, and became the nation’s symbol. It was a complex and contradictory era: it was an age of progress, stability and social reforms but on the other side it was characterized by poverty and injustice. Queen Victoria promoted a code of values that reflected the world as they wanted it to be, not as it really was, based on personal duties, hard work and charity. These values were also promoted by the middle classes who had the political and economical power.

As an expression of national pride, patriotism was influenced by ideas of racial superiority. There was an idea of divine will in the British people’s superiority over the rest of the world in terms of way of life, institutions, law and politics. All these aspects were part of what has come to be known as the Victorian compromise: society was divided in layers and the aristocracy thought that, thanks to progress, their condition could be attained by everyone. This code of values was based on some religious and philosophical movements (like Evangelicalism). The utilitarians also were convinced that any problem could be resolved through reason. They were criticized by many intellectuals of the time including Charles Dickens and Stuart Mill: they believed that progress came from mental energy and they tried to help men develop their natural talents.

Queen’s Victoria reign was the longest in the history of England. Her reign began in an atmosphere of social misery, but soon brought forth an era of progress, imperial expansion and social reforms. The merit for this belonged to the Queen, who, in contrast with other European monarchs, reigned constitutionally, avoiding the storm of revolution. She never overruled Parliament and became a mediator who was above party politics. In her reign the two main political parties were the Liberals and the Conservatives who alternated in government. The trades were liberalized through the Ant Corn laws in which protective tariffs was abolished gradually.

The Mid-Victorian Period starts (1848 – 1870): industries developed further. Britain’s leading industrial and economical position in the world was epitomized by the Great Exhibition of international works of industry of 1851. Between 1854 – 56 the Crimean War took place.

Victorian values eventually decayed (they were attacked by Wilde, for example), there was also an economic depression and emigration. In the 1867 the 2nd Reform Bill extended the vote to town workers and in 1884 with 3rd Reform Bill the vote was extended to agriculturists and miners. By the middle of the century the population in Britain increased mainly because of the industrial development. The solution for urban overcrowding were Queen Victoria’s political and social reforms. The poor lived in squalid areas characterized by high crime rates and mortality. The Government promoted a campaign to clean up the towns devastated by cholera and TB (Public Health act in 1870). Modern hospitals were also built; gas and lighting were introduced in stadiums, shops, prisons, police stations and town halls. A Primary Education system was created.

Victorian Novel: there is a communion of interests between reader and writer. Readers want to see themselves in the novel. Novels became the most popular genre of literature and the main form of entertainment. The novelist had a social and moral responsibility: they reflected the current social evolution. A great number of novelists were women, since they had more time than men to write novels. They often used male pseudonyms. The most prominent early Victorian novelist was Charles Dickens, who dealt with social themes and expressed the ideas of the age. The mid-Victorian novel was linked to the persistence of Romantic and Gothic traditions. The late Victorian novel was close to European Naturalism, which advocated a scientific look at human behaviour: writers like Oscar Wilde began to express a sense of dissatisfaction with the values of the age. 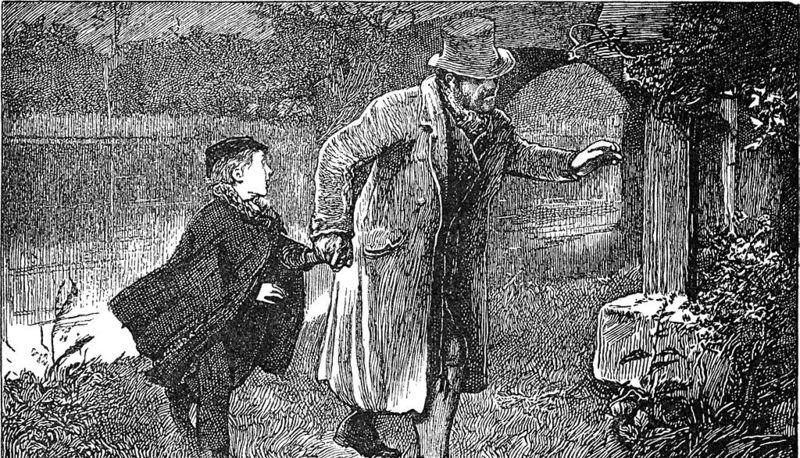 Victorian novels all have the same features: the voice of an omniscient narrator provided a comment on the plot, erecting a firm barrier between right and wrong. The setting chosen was the city, the main symbol of industrialization, and the expression of lost identities. The plot was long and often complicated by sub plots. Writers performed deep analyses of the main character’s personality. The final chapter often dealt with retribution and punishment. Realism was employed and the stories were about social problems.

Charles Dickens (1812 – 1870):
He was born in Portsmouth in 1812. He had an unhappy childhood since his father was imprisoned for debts. His wife and children, with the exception of Charles who was put to in work in a factory, joined him in jail. When the family’s financial situation was partly put to right and his father was released, twelve-year old Charles was further wounded by his mother’s insistence that he had to continue to work at the factory. His father however rescued him from that fate and Dickens was sent to school in London. By 1832 he had become a very successful shorthand writer and began to work as a reporter for a newspaper. In 1833 his first story was published. In 1836 he married Catherine Hogarth and he started a full time career as a novelist. He wrote Oliver Twist (1837), Nicholas Nickleby (1839), A Christmas Carol (1844), Bleak House (1853), Hard Times (1854) and Great Expectations (1860-1). He died in London in 1870.

Dickens shifted the social boundaries of the novel. The middle class world was replaced by that of the lower orders. He created caricatures by describing the characters, habits, and language of the middle and lower classes in London. He ridiculed vanity and ambition freely, without sarcasm. He was always on the side of the poor and the working class. He criticizes the middle class’s education utility, the idea of education that restricts imagination and the use of economical theories in education. He wasn’t a politician or an intellectual. He didn’t believe in politics, and he didn’t want to subvert the status quo. He wanted to make a change through the sensibility of people, humour, irony (not sarcasm). He wasn’t a socialist or an anarchist and he never encouraged the lower classes to rebel.

Children are the most important characters in Dickens’s novels. He reverses the natural order of things and opposes wise children to worthless parents. Children were the moral teachers instead of the taught, the examples instead of the imitators. His novel was influenced by the Bible, fables, nursery rhymes and by gothic novels.

Hard times: this novel is set in an imaginary industrial town, named Coketown. Thomas Gradgrind, an educator who believes in facts and statistics, has founded a school where his theories are taught; he represses the imagination and feelings of Louisa and Tom. Gradgrind marries Louisa to Josiah Bounderby, a rich city banker: she consents to help her brother who is given a job in the bank. But the marriage is unhappy; Tom, who is lazy, robs his employer and leaves the city. Hard times is divided in 3 sections, or books, and each book is divided in 3 chapters. The first shows Gradgrind’s education, the second talks about Louisa’s marriage and the third gives more details.
Hai bisogno di aiuto in 1800 e 1900?
Trova il tuo insegnante su Skuola.net | Ripetizioni