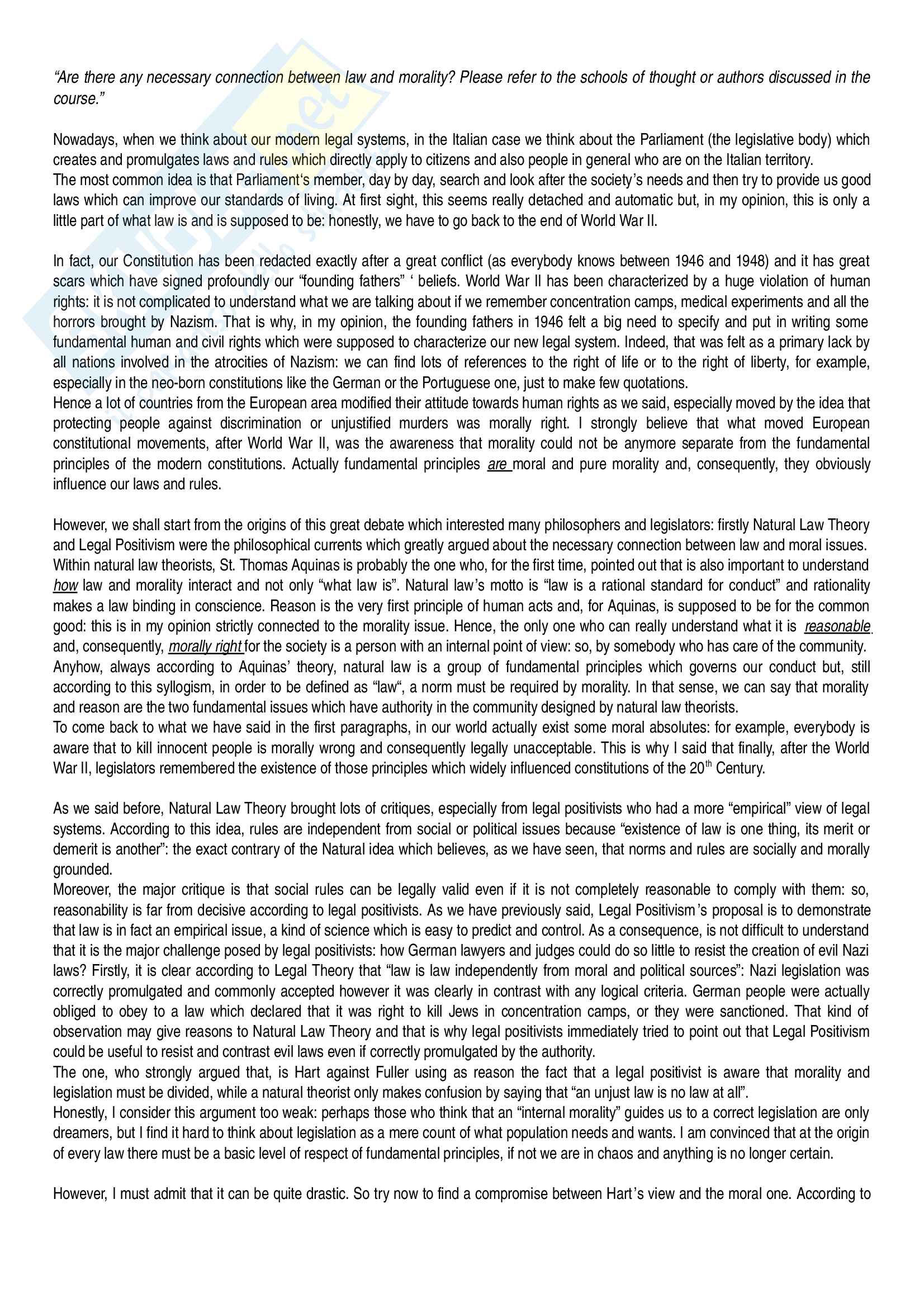 Connections between law and morality

Hart, a legal system actually exists when there is a so­called “Rule of Recognition” accepted by officials and which serves as guideline to

secondary rules: in some sense, we can say that a rule is right and valid when it satisfies parameters given by the wider rule. So, why Rule

of Recognition cannot be also obtained from moral principles which can, again, guide us in making other laws? If we think about it in that

way, for me they are very similar to each other.

Furthermore Hart says that a legal system is better analyzed by someone who accepts it: to accept some rules it might mean that you

comply with them and you understand why you act in some way. It is the case of an Italian citizen who complies and understands the

fundamental principles contained within the Constitution: for example he is in agreement with the fact that everybody has the right to be

free, hence he complies with the right of sexual determination, which is a rule connected to the primary fundamental principle. He can

obviously be in disagreement and then do not respect the rules: if so, he will be punished because, at the origin of this legal system, a

group of people decided democratically that those were the principles according to which creating laws and other rules.

Therefore, Hart is a curious legal positivist because on one hand he seems quite extremist (like when he says that natural theorists only

make confusion by saying that morality and laws are connected), while on the other hand he seems to accept an intermediate view when

sufficient for validity. This kind of theory is called “inclusive positivism”, a soft interpretation designed in order to accept Ronald Dworkin ’s

critiques. The philosopher is the most important critic to Hart’s view: principally he affirms what we have previously said, that legal systems

cannot be only piles of rules and that the validity of a rule cannot be divided from its consideration of merits. Dworkin, as a follower of the

Natural Law Theory, believed that morality is inevitably connected to legal systems, in fact a system is also made by principles and not

only by promulgated legal rules.

From the beginning we have mentioned the word “principles“, now we have to define them and figure out the differences from “rules”:

firstly, principles are moral propositions grounded in the past actions of legal officials; secondly they are not like all­or­nothing rules

because they do not necessitate a decision and they have shades; thirdly their activity (or weight) strongly depends from their so­called

It is important to pay attention to this feature: the pedigree of a principle is its institutional history, rooted in the legal system and they born

from thirst of justice which, according to Dworkin, makes them always right. Hence, Dworkin argues that what principles are able to give

us, Hartian Rule of Recognition fails.

As I have said at the beginning, Hart is “curious” because he shifts from one view to another: this is perfectly summarized in his Postscript

to “The Concept Of Law”. Hart tries to answer to Dworkin’s critiques and while he is discussing them, he slowly begins to accept that

morality may have an important role. The philosopher says that law is general because it is not tied to any particular legal system and it is

descriptive because it is morally neutral: for Hart law is “semantic”, for Dworkin is historical. Progressively Hart also recognizes that rules

cannot be based only on the social practice. Anyway, as we have seen, there is an important matter which the two thinkers do not comply

about: Dworkin cannot conceive the Rule of Recognition as made of principles because, in the Hartian Rule, they are not identified in the

institutional history of the legal system.

Other critiques come from John Finnis who affirms that law must be both description of past actions of legal officials and reason for action:

however, he cleverly understands that it is impossible to test this theory as we test scientific theories. We can only try to find out what a

Lots of philosophers and schools of thought tried to provide good reasons to comply with Natural Law Theory or not: a little bit complicated

to place is American Legal Realism. At a first sight it seems to be quite near to Legal Positivism, especially when Realists wonder why

Firstly it is fundamental to say that they were not philosophers but lawyers, who primarily wanted to decipher judges’ attitude towards

everyday cases; secondly, I found really wrong to pose questions like these: judges act like they do because they have to respect some

fundamental principles by punishing guilties and, moreover, they have to make clear to everyone that those principles must be respected,

no matter who you are. A part of American Legal Realism is called “Idiosyncrasy Wing” because there is the conviction that psychology

and personality strongly influence a judge in his actions and decisions: if so, judges can easily decide about a case of murder depending

only on their feelings, on their impressions and also on what they may have heard from televisions, radios and newspapers. It is obvious

that it cannot be like that, judges need to have some guidelines to show them the way to operate: a guideline can be obviously the

obligation to have proofs and evidences to condemn as guilty someone; or the obligation to follow a specific procedure during the trial; or

the sanctions which will follow if a judge only uses his beliefs and feelings. This protects citizens from judges’ discretion and makes our

Following American Legal Realism reasoning, we find that moral principles are considered as subjective and malleable: this kind of

assertion is quite problematic because it seems to be against Natural Law Theory. However, we must admit that saying that moral

principles are profoundly subjective is true if we only think about the Nazi period, when principles were totally upside down, or about India

where rapes are almost tolerate and no law at all seems to protect women. That is the point: every society, every legal system is

constituted by groups of people who share the same principles, the same convictions and who behave in the same way. So, those people 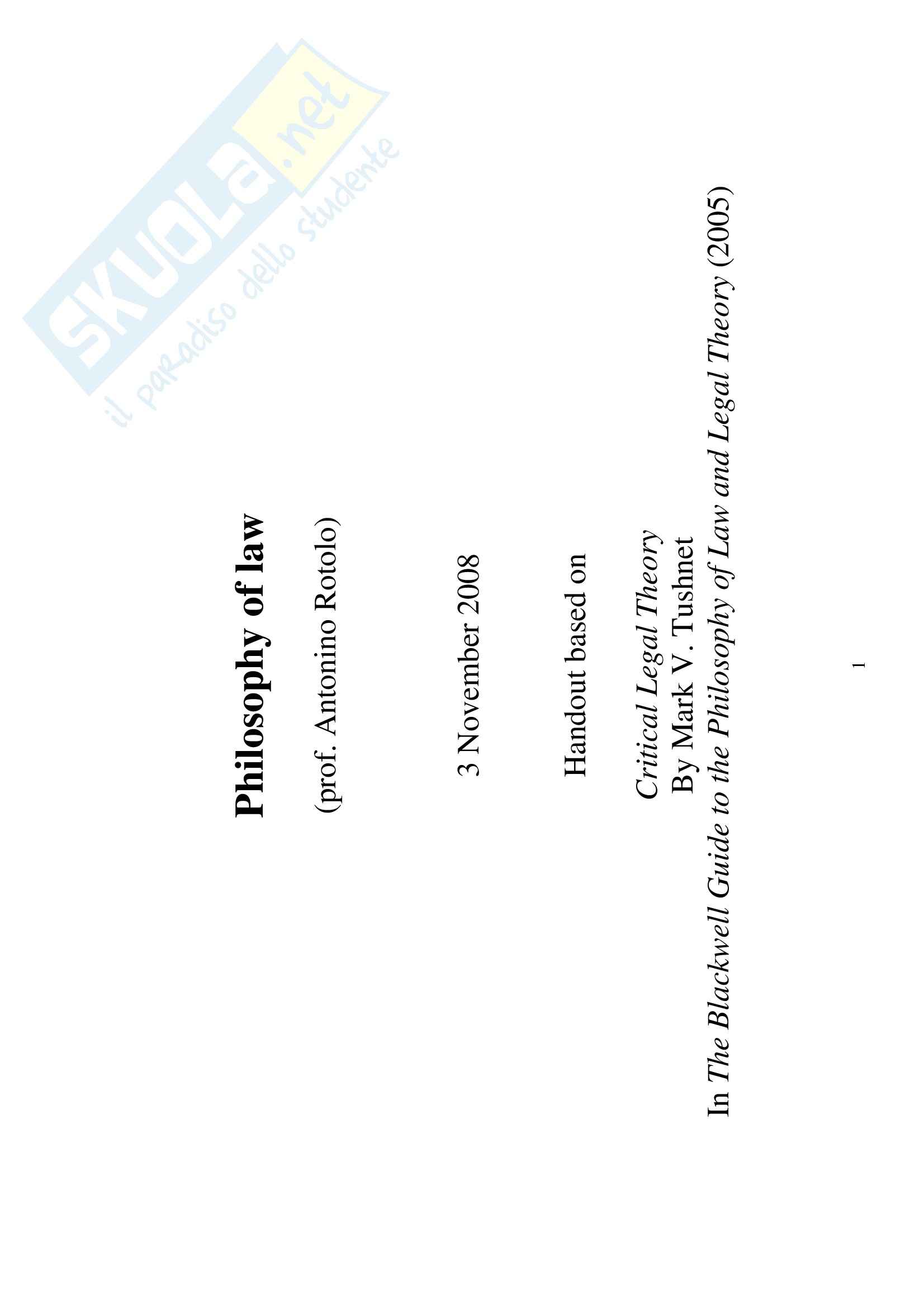 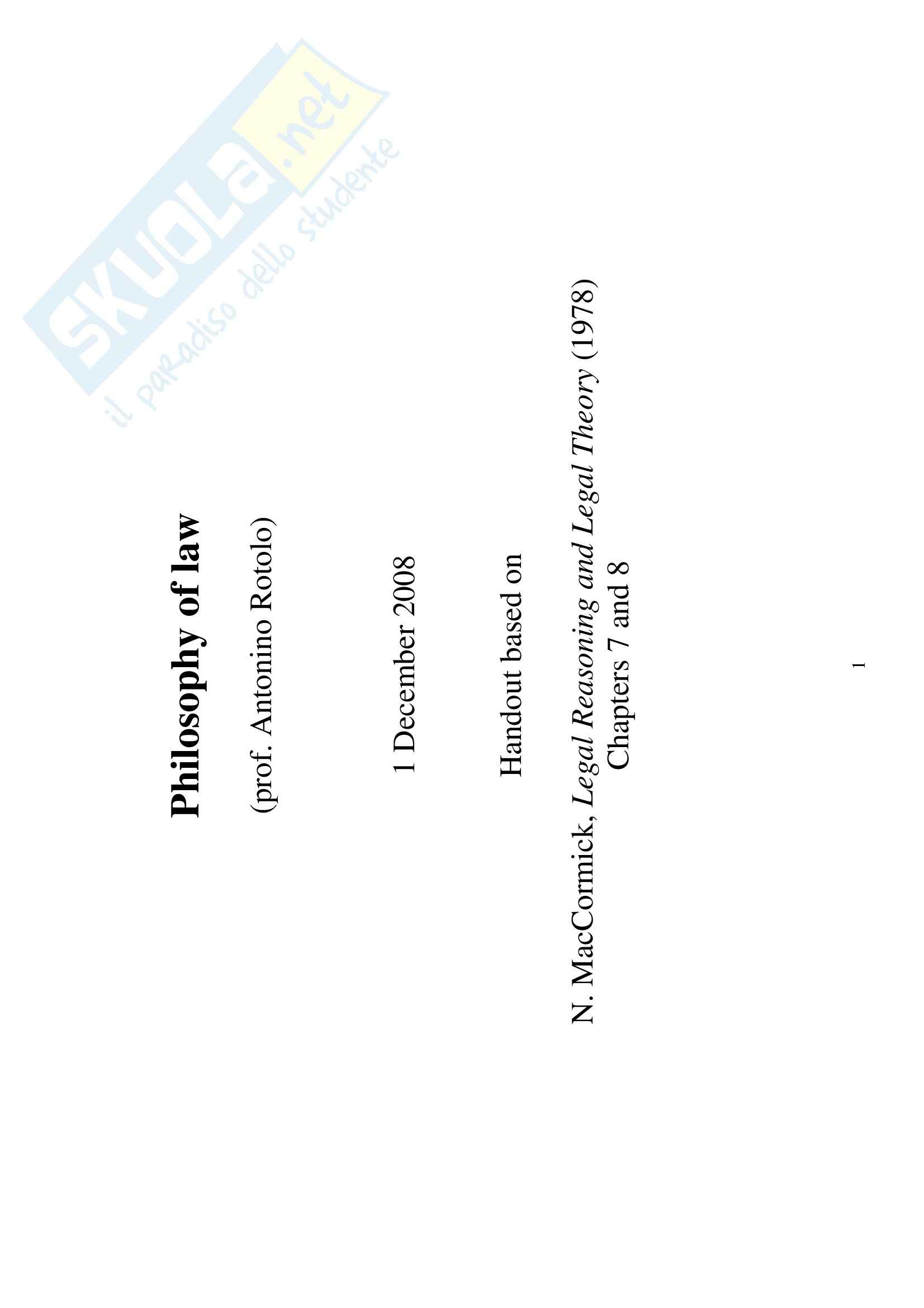 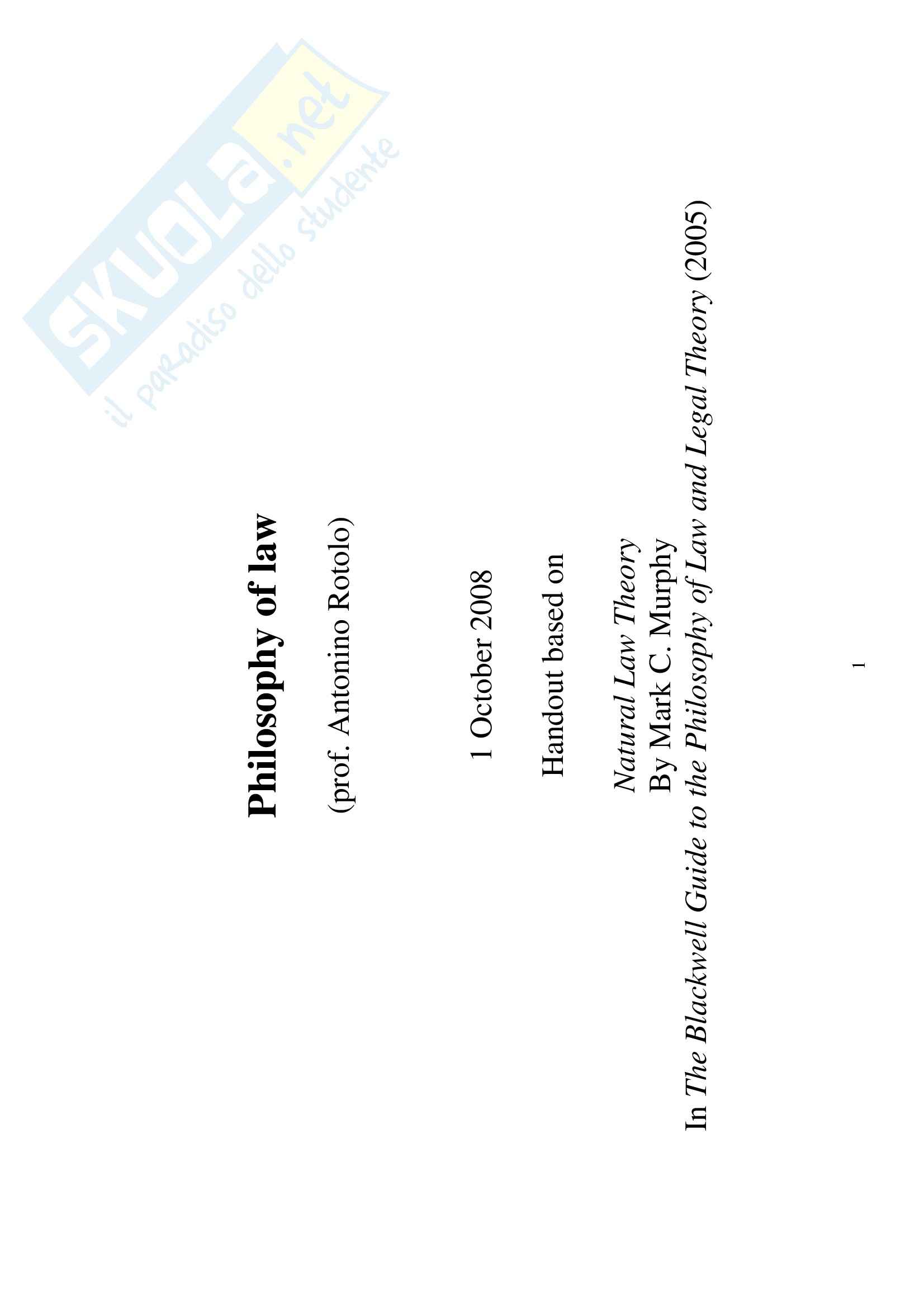 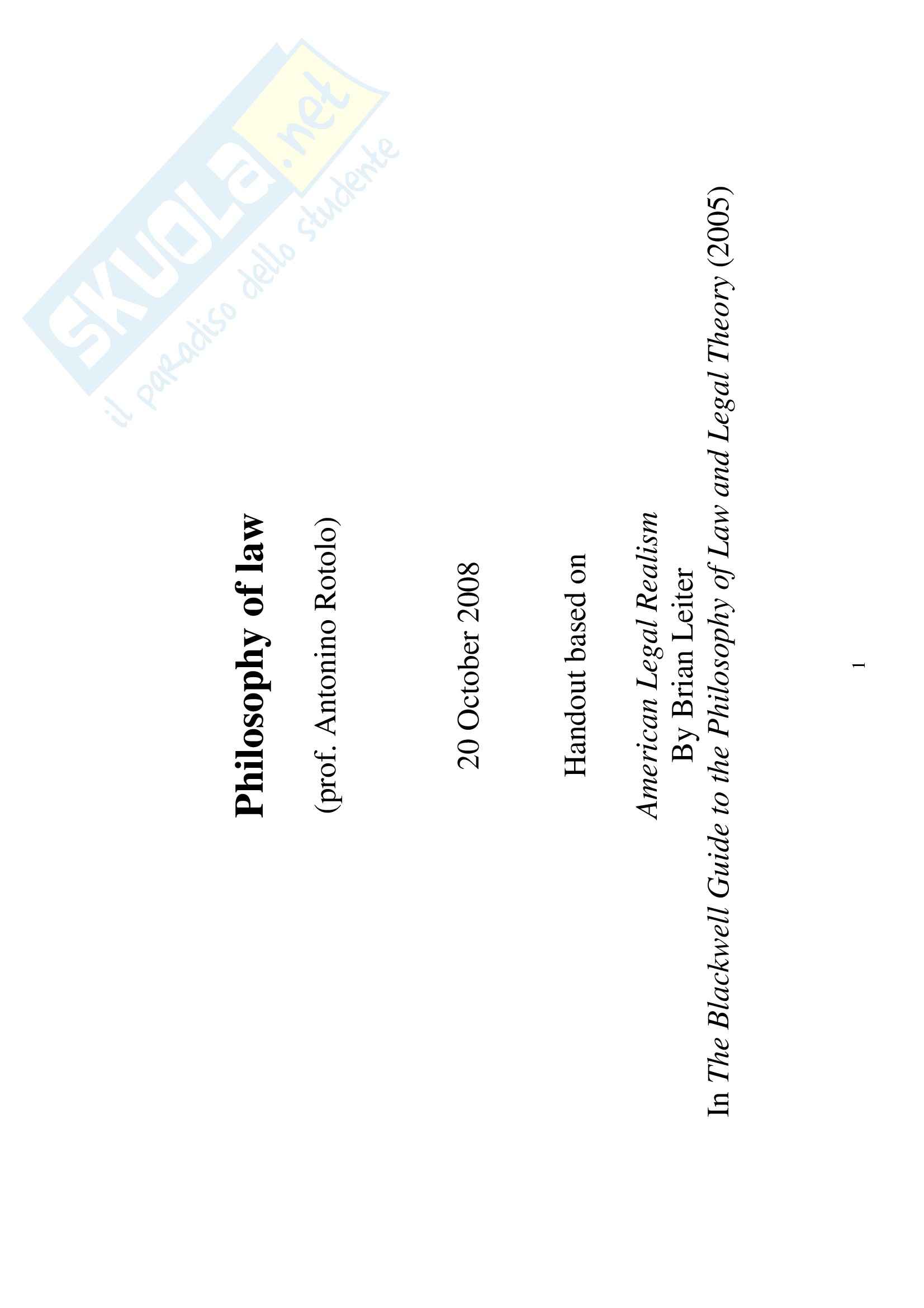