This is the love story of four couples: Theseus, Duke of Athens, and Hippolyta, Queen of Amazons; Lysander and Hermia; Demetrius and Helena; Pyramus and Thisbe that's the play within the play.
The conflict is between Egeus, Hermia's father, an Athenian aristocratic, and Lysander. He is furious with his daughter because she is in love with Lysander and refuses to marry her father's choice, Demetrius.
Theseus has to grant him "the ancient privilege of Athens", the barbaric licence to kill her for disobedience or send her to a nunnery to live in reclusion forever. So Lysander and Hermia decide to elope, ageeing to meet the following night in the wood near Athens.
But Helena, Hermia's friend, decides to expose the plan to Demetrius that she loves and hope to have his attention.
Meanwhile there is a group of artisans that prepare a play for Theseus' wedding.
The wood is "fantastic": it's full of fairies, elves precided over by their King and Queen, Oberon and Titania.
They are rival lovers and quarrel for a page that is a lovely-boy-toy of Titania and that Oberon wanted. He orders his jester, Puck, to pick a flower called "love-in-idleness" and squeeze drops of its juice into Titania's eyelids while she's sleeping. That reveng induces Titania to falling in love with the first creature she sees at her awake. So she falls in love with Bottom, an ass. He decides also to make falling in love Demetrius with Helena.
In the meanwhile the two lovers, Lysander and Hermia, weary and lost in the wood, rest there until morning. So Puck mistakenly gives drops to Lysander instead to Demetrius and he sees Helena at his awake and she's offended.
Puck realises that he has to correct his mistakes and he applies the antidote to the magical juice.
Everybody belived that it was only a dream.
Theseus and Egeus find them and they explain the situation. All couples are reconciled: Oberon with Titania, Lysander and Hermia, Demetrius and Helena.
They prepare to celebrate Theseus' wedding on the same day that should get married the other two pairies.

The main characters in this story are: Theseus, King of Athens; Hippolyta, Queen of Amazons; Oberon and Titania who are respectively King and Queen of the Faires; Hermia, Helena, Lysander and Demetrius. Others are Egeus, Hermia's father; the Faires Titania's suite and the artisans that prepare a piece for the royal wedding.
Theseus conquered the Amazons and took Hippolyta for wed to consolidate his dominion on her realm. So their relationship look like a business ageement.
Hermia is a pure, beautiful girl, innocent bau also stubborn. 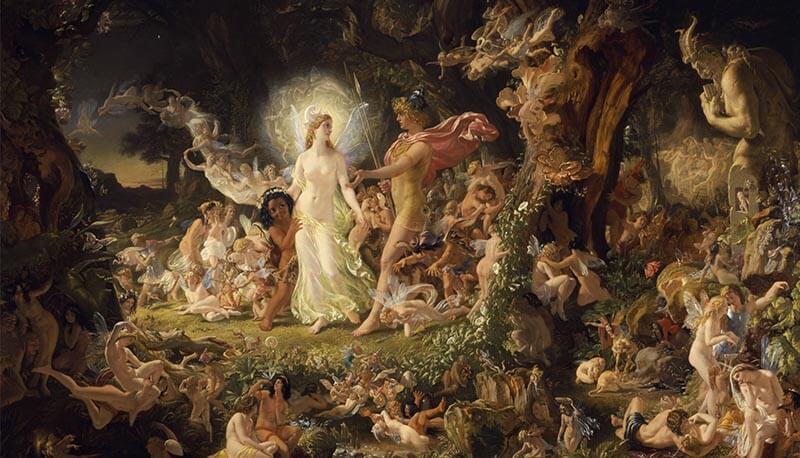 Helena is madly in love with Demetrius, who doesn't notice her.
Lysander is described by Egeus like the person that bewitched the bosom of this child and that feigned love, but he really loves Hermia.
Demetrius intentions are clear in the play. Maybe he's interested more in Hermia's money and respectable family than in Hermia herself.
Titania and Oberon's couple belong more to imaginary dimension than to realism. They are always in revalry, competition, "games" and caprices.
Titania is a lyric tender, delicate and sensual figure. She falls in love madly with Bottom becaus of the flower's juice.
A particular role concerns to Puck, Oberon's lieutenant and jester, that mistakenly causes many adventures with the love potion.

The full plot of Midsummer night's dream is played on the continuous lyric nuances and on the shades between real and dream atmosphere.
The dream is the basic element because gives to rise the prettiness, that fills many moments of the play. Only the dream in fact allows to realise desires without inhibitions.
There are two parallel worlds or kingdom: the rational realm of Theseus and Oberon's realm that administres impulses, passing fancies, passionality. So the contrast is between real and fantastic, realism and romanticism.
Another basic theme is love that Shakespeare describes as passionate and impulsive, or sensible and responsable. Hermia and Lysander story is pure love: symbol of innocence. The opposite is Hermia and Demetrius relationship. She refuses to marry him and Demetrius isn't passionate, but it seems to be only a business agreement.
Shakespeare illustrates the irony of love in values of the community and culture. Usually Oberon and Titania's couple is interpreted as the fantastic projection of Theseus and Hippolyta couple: rivalry, betrayals, the sensuality are the other face of their wedding.
Another theme is magic element: the love potion, the Bottom's transformation, the wood inhabited by fairies and elves.
This is a magic world rich in pure poetry, charming, music, song and dances.

This is a rich Shakespearean play which offers many adventures and a complex plot.
I appreciated this reading because of its charm and attractive story in fact it's a paaionate story of love in two parallel worlds: the fantastic wood where the foundamental dimention is dream and the real society of Athens where the foundamental dimention is the peason ond its laws and rules.
The Shakespearean style is elegant and rafined, but also linear and coherent. The language of the play is very expressive and various.
Vuoi approfondire Fino al 1700 con un Tutor esperto?
Trovalo su Skuola.net | Ripetizioni