di Frontiere
Erectus 578 punti
Ireland
Historical signs
If the history of the country is not known him it risks not to understand anything of Ireland, of the Irishmen, of the landscapes that are crossed, of the monuments that are visited, of the abandoned villages that are perceived here and there.

Everything begins 7.000 years before ours it was to north of Dublino, when a people been unknown, but probably native of the Iberian peninsula, it installs him in the valley of the river Boyne. The tumults of Newgrange (by 2500 a.Cs.) they belong to this civilization.
From the V century a.C., to following waves, they arrive from the Galizia I Roosters and The Celtis, that in the The century a.C. I am firmly by now installed in the country. I am a population united by the same language and by the same culture, but fragmented in a myriad of small kingdoms (up to 150), always in war among them. A fundamental fact: The Romans will never arrive in Ireland, that he will independently develop from the rest of western Europe.
In 432 AD St. Patrician it arrives in Ireland and, really while the barbaric invasions rage on the continent, the country becomes a center and a fortress of the Christian culture: “the island of the Saints and the Wise”. Á. this epoch they go up again the monastic installations of Glendalough and Clonmacnois and finds what the famous calica him Ardagh.
The Irish monks cross in long and in wide dark Europe of the tall Middle Ages and founds anywhere monasteries: St. Gall to St. Rooster in Switzerland, St. Colombano to Bobbio in Italy, St. Killian to Wurzburg in Germany and other anchor up to Luxeuil and to Kiev. In the meantime, in him “scriptoria” Irish, other monks transcribe the great sagas of the Celtis and they reproduce The sacred texts in splendid miniated volumes (Book of Kells). And' the age of the Irish gold and the testimonies and the finds of this period are innumerable: books, objects of orificeria, monuments.
Toward the year 800, the Scandinavians' arrival (Danish before, and the Viking ones then) it marks the end of this age of the gold. The invaders install him in the outskirtses of Dublino and from here they sow the terror in the whole country. Fortitudes, castles and also the curious round towers are built for defending himself/herself/themselves from their scorribandes.
The Monasteries are devastated, reconstructed, and then again devastated, as long as in 1014 the king of Ireland, Brian Boru, defeats the Viking ones in the battle of Clontarf. In the 150 years that follow, the various clans are fiercely fought the one against the others, but despite this it is assisted to a certain “rinascimento” of the art and of the literature Irish, testified from the famous Abbey of Mellifont. 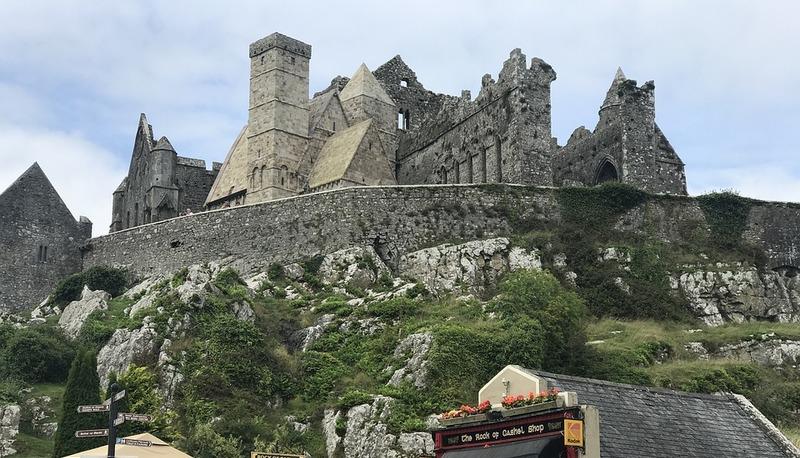 The irlanda Of the English - from the XII to the XIX century
In 1169, called by a local kinglet in difficulty, Henry II of England sends in Ireland Richard Strongbow. In the turn of a few years the Anglo-Norman ones occupy Dublino and the whole surrounding region (since then said “Shovels”, the enclosure) and The great vassals are divided The grounds of the east and the center of the island. Henry II becomes sovereign of Ireland and The Anglo-Norman barons, tutelary of the administrative arrangement of the island, they build churches and castles, they develop the cities and, few to few, becomes Irish.
In 1541, with the triumph of the Reform in England, the protectorate does him heavier. Henry VIII becomes king of Ireland and moves war to the island been faithful to the Pope. As in England, the Catholic Church is persecuted, the dissolved monasteries and I suppressed. Fifteen years later it begins the agricultural exploitation and The farmers Protestant English they occupy the earths of the chased Irish Catholics. Three revolts are tamed and the last Irish noble are forced to abandon the country (her “Escape of the Accounts”).
The two following centuries will be very hard: in 1650 the repression of Cromwell upsets the island; in 1690 the defeat of Boyne sweeps away the last hope of the Irishmen, that is a Catholic king in England; from 1695 to 1725 the Penal laws deprive the their Irish Catholics of the last rights remained.
A cleared breve coincides with the War of American independence, but you/he/she cannot satisfy the Irishmen that want very more: the independence of their country.
Wolfe Tone tries to get the support of revolutionary France; Hoche fails to Bantry in 1796, Humbert to Killala in 1798 (it will be “the Year of French”), and finally Tone he commits suicide in the jail. In 1800, Ireland is united to England and the Irish Parliament you/he/she is loosened.


Toward the Ireland of the Irishmen
Paradoxically it is, really giving the possibility to stop the jobs of the Parliament in London to the Irishmen, following the unification of the two countries, that the English are seen forced to change the situation. O'Connell before, and then Parnells get the emancipation of the Catholics and a new agrarian law that it turns Ireland into a country of small land owners. But in the meantime a terrible catastrophe gets depressed on the country: the Great Famine. In 1846, and again in 1847, a parasite destroys completely the crop of the potatoes, principal maintenance of the population. More than 700.000 Irishmen they die and 800.000 emigrate in America. Ireland is emptied: the population drastically reduces him from 8 million to 4, and in 1914, 4 million and a half of Irishmen have left by now the country.
In 1912, the Parliament in London votes the law for the administrative autonomy of the island (Home Rule), but the burst of the Great War delays the application of it, doing the explode I displease some movements indipendentisti (Sinn Fein) that, the 1916 Easter day, they proclaim the Republic of Dublino. The army English suffocates the revolt, but in 1919 the Sinn Fein wins the elections and guide therefore the armed struggle up to the 1921 London Essay, with which Ireland gets the independence, remaining “Dominion of the Common-wealth”: the 26 counties become the Free State of Ireland, while the six counties of Ireland of the North keep on belonging to the United Kingdom.
A part of the population refuses the division of the island, enacted by the Essay, and in 1922-23 the civil war upsets the country. In the 1032 salt to the power De Valera. In 1937 a new constitution is voted and, in 1949, the last constitutional bonds with Great Britain are chopped off and Ireland becomes Eire. In 1973, the country enters to belong to the European union.
Hai bisogno di aiuto in Civiltà inglese?
Trova il tuo insegnante su Skuola.net | Ripetizioni