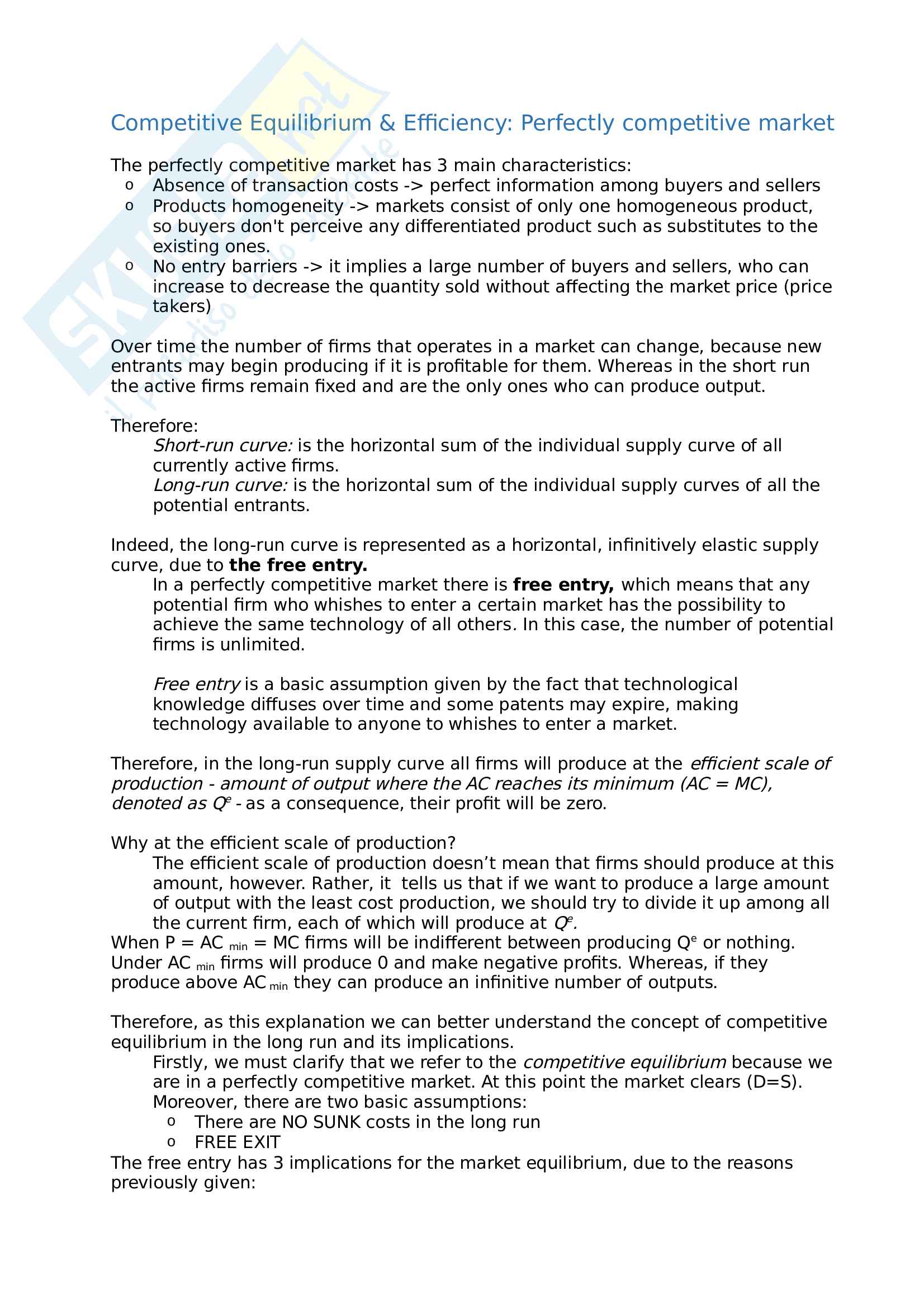 Absence of transaction costs -> perfect information among buyers and sellers

o Products homogeneity -> markets consist of only one homogeneous product,

No entry barriers -> it implies a large number of buyers and sellers, who can

Over time the number of firms that operates in a market can change, because new

entrants may begin producing if it is profitable for them. Whereas in the short run

the active firms remain fixed and are the only ones who can produce output.

Short-run curve: is the horizontal sum of the individual supply curve of all

Long-run curve: is the horizontal sum of the individual supply curves of all the

Indeed, the long-run curve is represented as a horizontal, infinitively elastic supply

curve, due to the free entry.

In a perfectly competitive market there is free entry, which means that any

achieve the same technology of all others In this case, the number of potential

knowledge diffuses over time and some patents may expire, making

technology available to anyone to whishes to enter a market. efficient scale of

Therefore, in the long-run supply curve all firms will produce at the

production - amount of output where the AC reaches its minimum (AC = MC),

e as a consequence, their profit will be zero.

Why at the efficient scale of production?

amount, however. Rather, it tells us that if we want to produce a large amount

of output with the least cost production, we should try to divide it up among all

the current firm, each of which will produce at e

When P = AC = MC firms will be indifferent between producing Q or nothing.

Under AC firms will produce 0 and make negative profits. Whereas, if they

produce above AC they can produce an infinitive number of outputs.

Therefore, as this explanation we can better understand the concept of competitive

equilibrium in the long run and its implications. competitive equilibrium

Firstly, we must clarify that we refer to the because we

are in a perfectly competitive market. At this point the market clears (D=S).

Moreover, there are two basic assumptions:

There are NO SUNK costs in the long run

The free entry has 3 implications for the market equilibrium, due to the reasons

Furthermore, it is important to know the number of active firms in the long-run : N

Whereas, in the short-run the number of firms is fixed.

When do firms enter the market?

produced in the long run;

N = Q*/Q for finding the number of active firm, each of which

 produces at the efficient scale of production.

In case there are sunk costs, you have to take

 The price will be above P* > AC min, hence firms will register positive

 Therefore, we expect many firms to enter the market, so the price will be

drawn down to AC min again.

Why do we talk about aggregate surplus?

The aggregate surplus measures the efficiency of an economy. In other words, a

market is economically efficient if it maximizes the social surplus. The latter equals

the sum of the CS consumer surplus and the PS producer surplus.

How do we measure them?

 quantity consumed. This is true if the quantity of goods are consumed by

whenever all consumers face the same price)

 quantity of goods produced by those firms with the lowest avoidable

Being economically efficient means also that any alternative outcome that makes

someone better off it must make somebody else worse off. A particular output of

this kind is the Pareto Optimal, which is an economic output at which is

impossible to make anyone better off without making someone else worse off.

Deadweight loss: is the reduction of the aggregate surplus below its maximum

because set their price equal to the marginal cost for

maximizing their profits. Therefore, there is no deadweight loss.

Why do firms price discriminate?

the needs of a larger range of customers. In fact, a monopolist could increase its

profits by: Charging more the units for those costumers that are willing to pay

o more for the output,

Reducing the charge over those units, for which costumers do not

o have such a high willingness to pay.

Naturally, in order to compute price discrimination market power is needed and also

an ability to distinguish costumers' WTP.

This process is called prefect price discrimination, when the firm is able to

prices for each unit it sells.

However, sometimes firms aren't able to determine such a perfect pricing for each

WTP. But, if they are clever they can use different techniques of price discrimination

based on : Observable characteristic : when a firm can distinguish, even if

o imperfectly , consumers with a high versus low WTP

Self selection: when firms offer a menu of alternatives, designed

Quantity depended: or volume sensitive pricing plan: is the price

o that a costumer pays of each extra unit, that depend on how many units the

Since a perfectly discriminating monopolist collects an amount equal to the

consumer WTP for each unit, its marginal revenues coincides with the demand

curve, so perfect price discrimination is similar to the perfect competition: 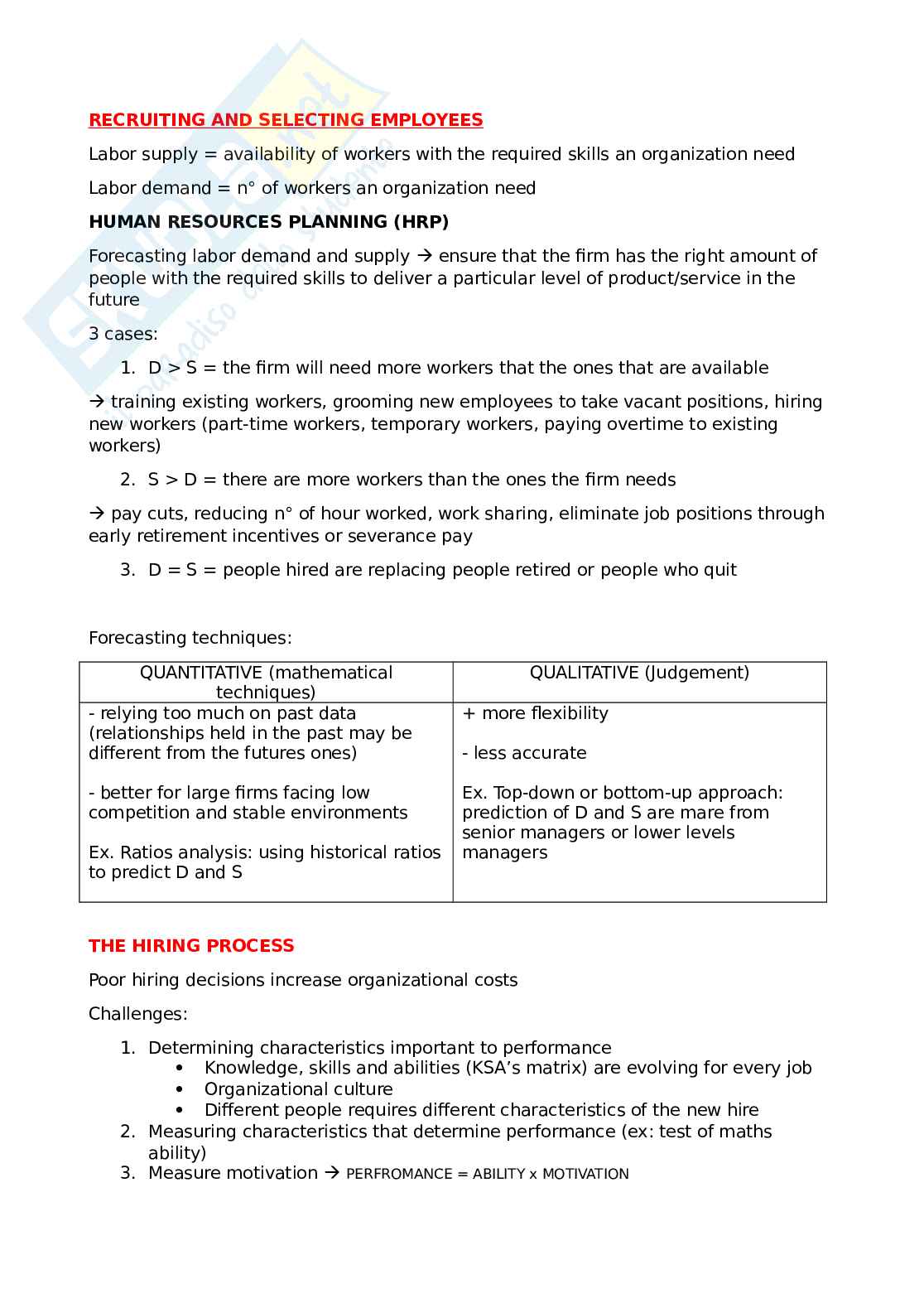 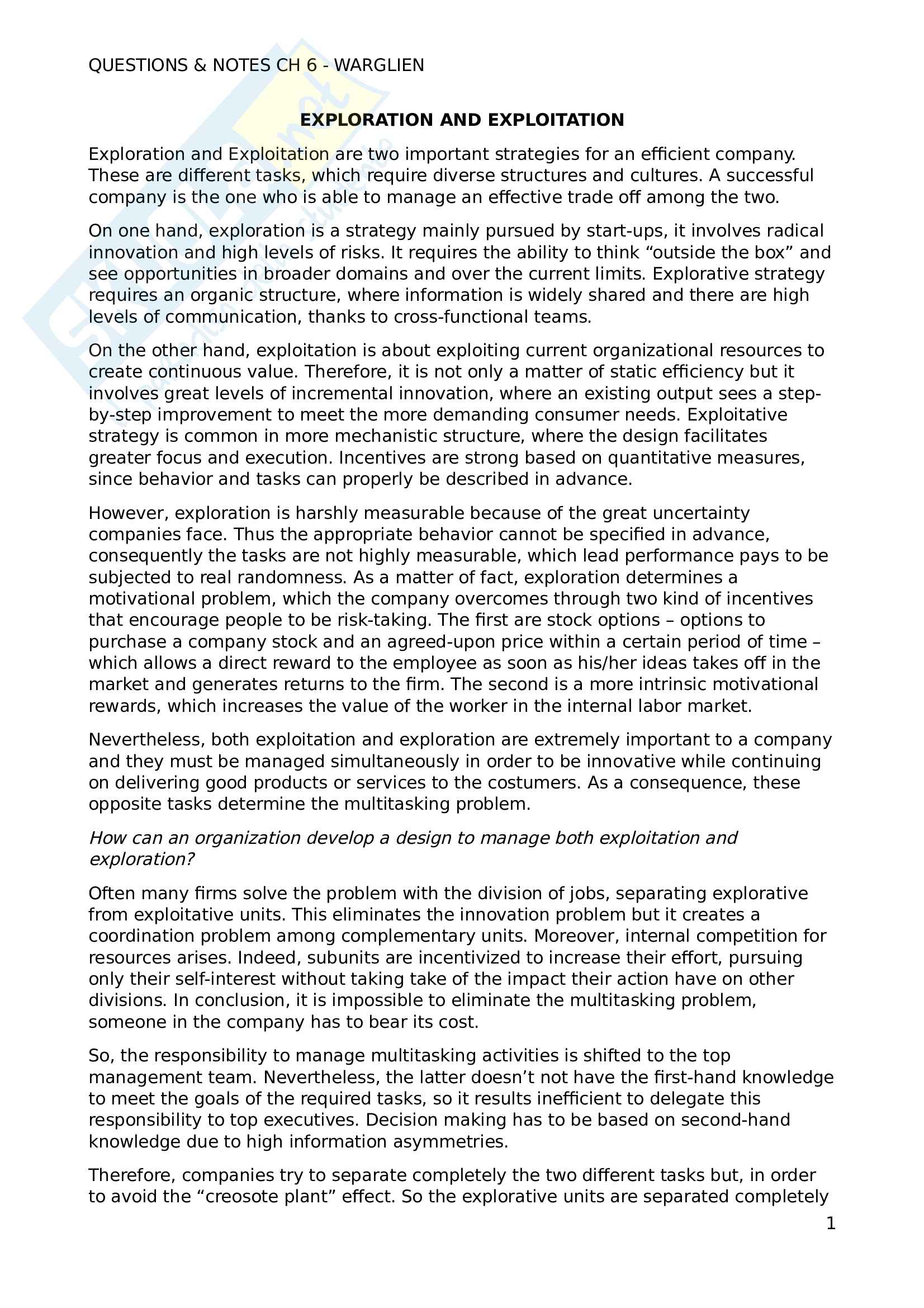 Notes on exploration and exploitation

The 4 main ingredients for organizational design 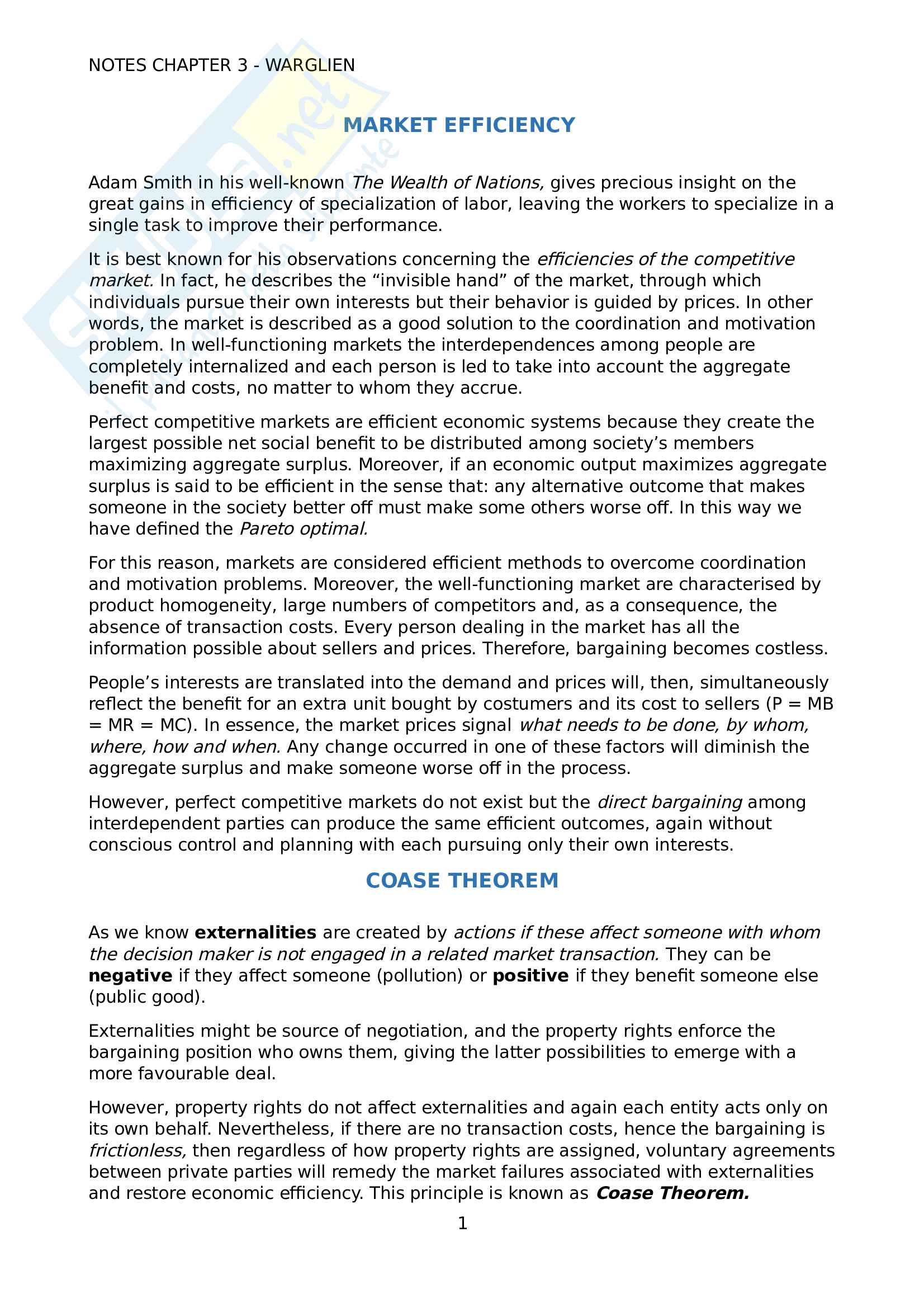 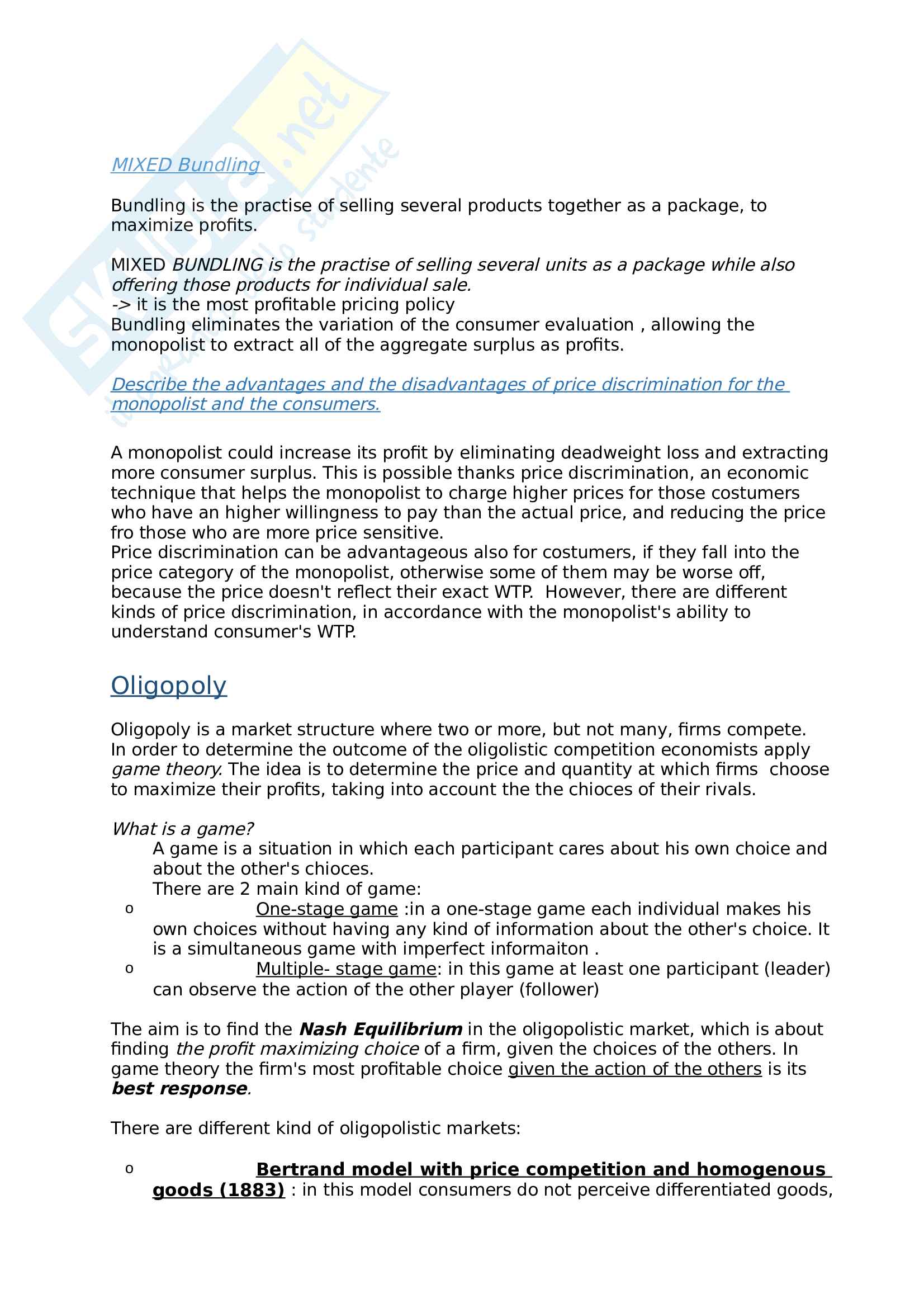