OSCAR WILDE
1854-1900
He was born in Dublin and he attended the Trinity College in Dublin and he graduated in Oxford. He distinguished himself for eccentricity. He became a disciple of Walter Pater and accept the theory of “Art for art’s Sake”. After the graduation he settled in London where he soon became a fashionable figure both for his extraordinary wit and his strange way of dressing.
In 1881 he edited “Poems” and the works had a strong success.
In 1883 he married Constance Lloyd who bore him two children but he soon became tired of his marriage. At this point of his career he was most noted as a great talker.
In the late 1880s Wilde’s literary talent was revealed by a series of short stories written for his children:
- The Canterville Ghost
- Lord Arthur Savile’s Crime
- The happy prince and other tales
and a novel
- The picture of Dorian Gray (1891).
After this only novel he developed an interest in drama and revived the comedy of manners:
- Lady Windermers’s fan
- A Woman of No Importance
- The Importance of being Earnest (1895)
Both novel and tragedy demaged the writer’s repputation, since the former was considered immoral, and the latter was prevented from appearing on the london stage owing to its alleged obscenity.
In 1891 Wilde met the young and good-looking Lord Alfred Douglas, whose nickname was Bosie and with whom he dared to have a homosexual relation. The boy’s father forced a pubblic trial and Wilde was sent to prison for homosexual offences. In prison he wrote “ De Profundis”, a long letter to Bosie published in 1905. He also writes “The ballade of Reading Jaoul”, a poem where he tells about the moral sufferings of the prisoners.
When he was released he was a broken man; his wife refused to see him, and he went in exile in France, where he lived in poverty. He died of meningitis.

The rebel and the dandy: Wilde completely adopted the aesthetic ideal, as he affirmed in one of his famous conversations: “My life is like a work of art”. He lived the double role of rebel and dandy.
DANDY-> is a bourgeois artist, who, in spite of his uneasiness, remains a member of his class. The Wilde dandy is an aristocrat whose elegance is a symbol of superiority of his spirit; he uses his wit to shock and is an individualist who demands absolute freedom. Life was meant for freedom and pleasure was an indulgence in beauty, so Wilde’s main interests were beautiful clothes, good conversation, delicious food and handsome boys. He didn’t believed in the moral aim of the book->” THERE IS NO SUCH THING AS A MORAL OR IMMORAL BOOK.BOOKS ARE WELL WRITTEN OR BADLY WRITTEN.THAT IS ALL”.
He had a deep understanding of human life.

Art for Art’s Sake: this concept was for him a moral imperative and not merely an aesthetic one. He believed that only art as the cult of beauty could prevent the murder of the soul. Wilde perceived the artist as an alien in a materialistic world, he wrote only for please himself and was no concerned in communicating hai theories to his fellow-beings. 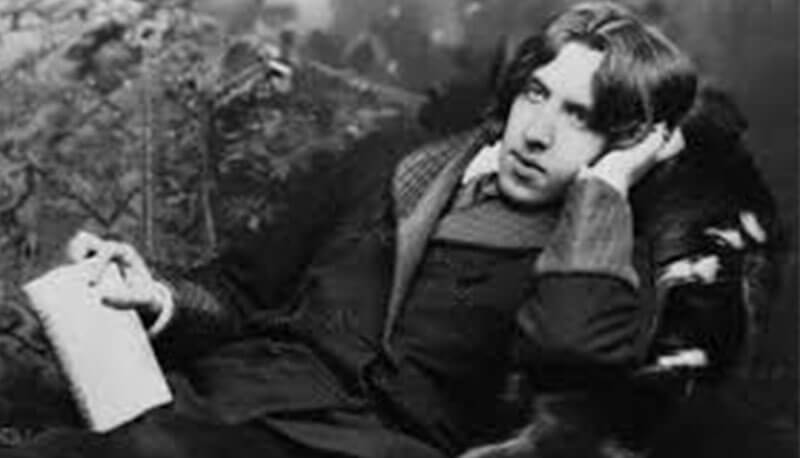 His pursuit of beauty and fulfilment was the tragic act of a superior being inevitably turned into an outcast.

THE PICTURE OF DORIAN GRAY (1891)
Plot: Dorian is a young man whose beauty fascinates an artist, Basil Hallward, who decides to paint him. While the young man’s desires are satisfied, including that of eternal youth, the signs of age, experience and vice appear on the portrait. Dorian lives only for pleasure, making use of everybody and letting people die because of his insensitivity. When the painters sees the corrupted image of the portrait, Dorian kills him. Later Dorian wants to free himself of the portrait, witness to his spiritual corruption, and stabs it, but he mysteriously kills himself. In the very moment of death the picture returns to its original purity, and Dorian’s face becomes horrible.

Narrative technique: he used an obtrusive, third-person narrator. The perspective adopted is internal from the point of Dorian. The setting are vividly described, with words appealing to senses, the characters reveal themselves through what they say or other people say about them.

The typical dandy: Dorian is the protagonist, the typical dandy, who thinks man should live his life, realising his wishes and his dreams.
Dorian believes that youth is synonymous with beauty and happiness.

Allegorical meaning: It is a 19th century version of the myth of Faust, the story of a man who sells his soul to the devil so that all his desires might be satisfied.
-> this soul became the picture, that records the signs of experience, corruption, horror and sins concealed under the mask of Dorian’s timeless beauty.
The picture is not an autonomous self: it is the symbol of Dorian’s personality.
The moral of this novel is that every excess must be punished and reality cannot be escaped. When Dorian destroyed the picture he mast pay all his sins, and so he died.

THE IMPORTANCE OF BEING EARNEST (1895)
A new comedy of manners: Wilde’s contribution to theatre was a new sort of play, in which the problems of his age were reflected through his witty remarks. The tone is satirical but the clichés and stereotypes of high society are bitterly criticised in a new “Commedy of Manners” reviving style of Congreve and Wycherley.

Marriage and money: this play presents an aristocratic society rather then the middle class, and it neither begins nor ends with respectability or obvious order. The characters are not compromised by what others know about them, but by what they discover about themselves. In this play Wilde aims at inverting the traditional values of his society, and criticising the hypocrisy of its. The play is also concerned with money and food.

Irony and imagination: the whole play is built on witty, dazzling dialogues, and the characters, used by the playwright to criticize Victorian prudery and exaggerated seriousness, exist only because they take part in conversation. It is a self evaluation -> because also Wilde knows that he was one of the upper classes but he criticizes yet. As the upper class looking at the play, he recognized his sins.
Hai bisogno di aiuto in 1800 e 1900?
Trova il tuo insegnante su Skuola.net | Ripetizioni