Daniel Defoe was born in London. Son of a merchant, he was educated at a school of Dissenters (puritans). He travelled for some years in Europe. Around 1700 Defoe turned to journalism and became particularly interested in politics, writing pamphlets and essays. He wrote in prose, and he published a novel called "Robison Crusoe". He died in 1713 in London.

Robison Crusoe tells of a man's shipwreck on a desert island. The plot is based on the true story of the Scottish seaman Alexander Selkirk. It is generally regarded as the first modern novel.

Robison Crusoe is a young man living in England who dreams of going to sea. Crusoe is presented with a new proposition: to being a business in the slave trade. While he is travelling to Africa there is a terrible storm, he is shipwrecked and he is the only survivor. He remains in that island for 28 years. In second part the novel centres around his life on the island and it is written in the form or a journal. He meets the native Friday. In the last part Crusoe and Friday are taken to England and he discovers that he has become rich. He marries, but when his wife dies, he decides to go back to sea. 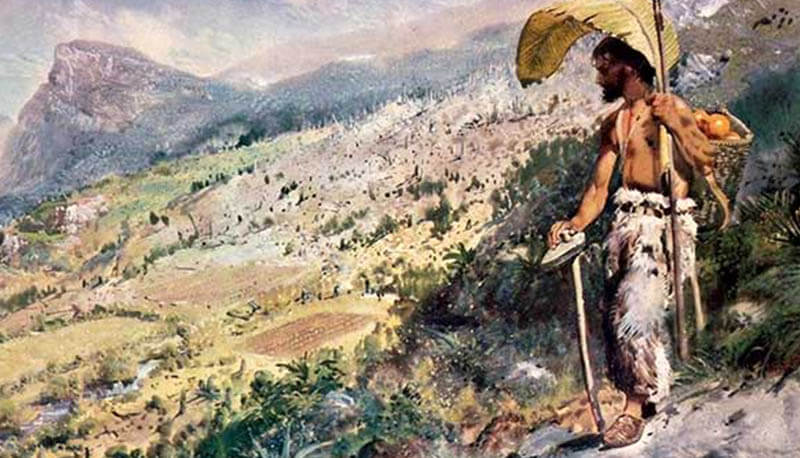 Robison Crusoe is a legendary figure; thanks to his hard work, determination and creative skills, he manages to organize his daily life perfectly. He becomes a hunter, a builder and a shepherd. He battles to survive and wins that battle.

An expression of European Colonial Aspirations

Robison behaves as a colonist even with the native he meets, Friday. He gives a name to the slave, teaches him his language and new techniques and tries to convince him to embrace his religion.

A Manifesto of economic individualism

Born into ten England middle class, he expressed the economic and political aspirations of his class. Although Robison has a modest and secure life in England, he leaves in order to improve his financial situation and seek adventure. It is more profitable to trade with the indigenous people of non-western countries because they value goods differently from the Europeans. He turns to the profitable business of the slave trade. Shipwreck on the deserted island he does not lose heart. He recreates the kind of micro-social structure which is as close as possible to the one he left.
Vuoi approfondire Fino al 1700 con un Tutor esperto?
Trovalo su Skuola.net | Ripetizioni