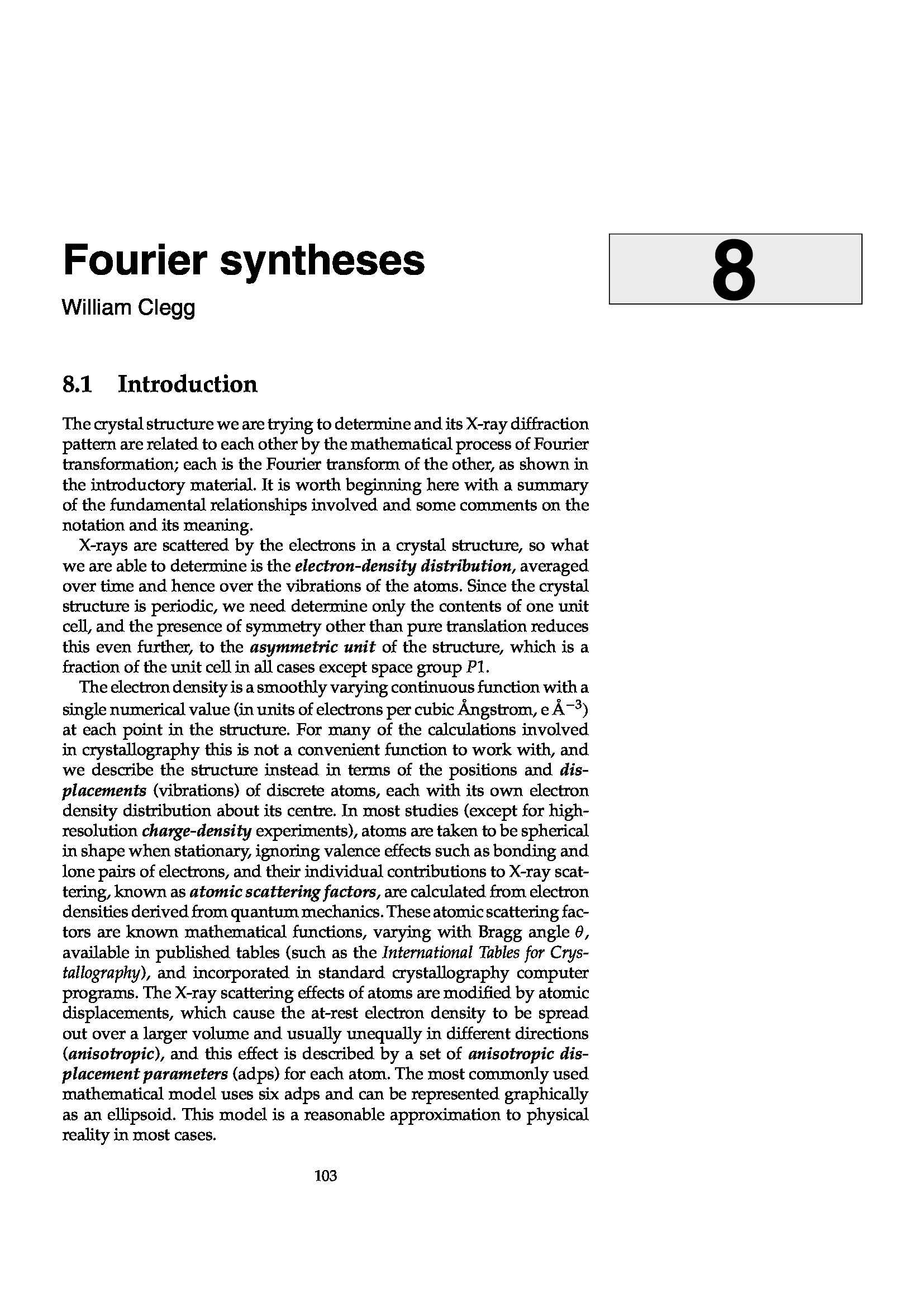 Here, the structure factor has been separated into its amplitude |F|

Different kinds of Fourier syntheses use different coefficients instead

to the individual terms in the sum, so that not all reflections contribute

strictly in proportion to these coefficients. These are all attempts to obtain

determination, even if the phases are not well known.

These are discussed in detail in the next chapter. The coefficients are

2 instead of and all phases are set equal to zero. In this case

all necessary information is known and the synthesis can be readily

performed. The result, of course, is not the electron density distribution

for the structure, but it is related to it in what is often a useful way, as

is explained later. There are some slight variations even within this use,

and these are covered in the Patterson synthesis chapter (Chapter 9).

tures, and are discussed more fully in Chapter 10. The coefficients are

which represent the diffraction pattern expected for point atoms (with

their electron density concentrated into a single point instead of spread

out over a finite volume) of equal size, at rest. are calculated,

with a number of assumptions and approximations, from the observed

amplitudes and only the largest values are used, weaker reflections

being ignored because they contribute less to the Fourier synthesis any-

way. Phases for this selected subset of the full data are estimated by

a range of techniques under the general heading of ‘direct methods’,

calculated These maps tend to contain sharper (stronger and

narrower) maxima than normal Fourier syntheses (F-maps), and this

can help to show up possible atoms, but they also tend to contain more

noise (peaks, usually of smaller size, that do not correspond to genuine

raphy, except for demonstration purposes, because the other types of

syntheses have particular advantages at different stages. However, let

110 experimental phases. Such a procedure can be used when some of the

atoms have been located (perhaps from direct methods or a Patterson

synthesis) and others still remain to be found. Once we have some

atoms, we can use them as a which we know is not

complete, but it contains all the information we currently have. From

the model structure we can use (8.1) to calculate what its diffraction

pattern would be. This will not be identical to the observed diffraction

pattern, but it should show some resemblance to it, the more nearly so

as we include more atoms in the correct positions. There are various

measures of agreement between the sets of observed and calculated

amplitudes, and but the important thing is that the calcu-

to know, they are currently the nearest thing we have to them. A Fourier

synthesis using coefficients with the phases would just repro-

duce the same model structure and get us nowhere, but combining the

gives us a new electron-density map. If the calculated phases are not too

has atoms in approximately correct places and these are a significant

proportion of the electron density of the structure), then this usually

shows the atoms of the model structure again, together with new fea-

tures not in the model structure but demanded by the diffraction data,

i.e. more genuine atoms. Because of all the approximations involved in

this process, there may also be peaks in the electron-density map that

do not correspond to real atoms, and the results need to be interpreted

in the light of chemical structural sense and what is expected. Addi-

tion of these new genuine atoms gives a better model structure, and

the whole process can be repeated, giving better calculated phases and

yet another new, and clearer, Fourier synthesis. This is done repeatedly

These are widely used in preference to full electron-density syntheses

for expanding partial structures. The coefficients are and the

phases are obtained from a model structure as described above. The

result is effectively an electron-density map from which the features

already in the model structure are removed, so that new features stand

out more clearly, and it usually makes it easier to find new atoms. This

is rather like saying that, if the tallest peaks in a range of mountains

were somehow taken away, the foothills would appear to be much more

impressive! Peaks lying at the positions of atoms in the model structure,

or negative difference electron density there, indicate that the model

has either too little or too much electron density in those places, and can

Fig. 8.3 A section through a difference synthesis showing the effect of wrongly assigned

atom types and missing hydrogen atoms; the assumed model structure is shown, together

with the positions of its atoms and bonds in the map.

C for these respective effects. An example is shown in Fig. 8.3. There are

potentially some considerable problems with difference syntheses when

the proportion of known atoms is quite small, because the calculated

uncertainties in their intensities can cause disproportionate errors, and

it may be best not to use the weakest reflections; alternatively they can

be given reduced weights, as discussed below. It is important to ensure

that the observed and calculated data are on the same scale. Another

reason why difference syntheses can be better than full syntheses is

beyond the measured cancel out through use of the differences

instead of full amplitudes.

structure combines the advantages of standard and difference synthe-

ses. The resulting map shows both the known and the as-yet unknown

features of the structures, with the new atoms emphasized, and it is

less subject to some of the errors of the simple difference synthesis.

It is more widely used in protein crystallography than by chemical

Towards the end of structure determination, difference maps are often

used to locate hydrogen atoms. These can not usually be found until

all other atoms are present and have been refined with anisotropic

displacement parameters, so that their contributions are correctly rep-

resented in the model structure. This is because hydrogen atoms have

very little electron density, and even that is significantly involved in

bonding, so the positions found in difference maps are usually closer to

atoms. Unless data are of good quality, and particularly when heavy

atoms are present in the structure, hydrogen atoms can easily be lost in

the noise of an electron-density map. This is particularly true for non-

centrosymmetric structures, where the absence of hydrogen atoms in a

model structure is partially compensated by shifts in the phases from

their correct values; any Fourier synthesis using calculated phases will

less to high-angle reflections, because their atomic scattering factor falls

off more quickly with than those of other atoms, so it may help to

leave out the high-angle data, or use weights that reduce their contri-

bution to the sums. Right at the end of a structure determination, when

refinement is complete, a final difference synthesis must be generated

by the refined model. This must include all data and use no weights.

Residual electron density may be an artefact of inadequate data correc-

tions (usually absorption), or may indicate poorly modelled disorder or

other problems and imperfections in the model. The sizes of the largest

maxima and minima in this final difference map, together with their

positions if they are of significant size, are important indicators of the

quality of a structure determination, and should always be included in

any summary of the results.

It was noted above that the calculated phases, derived from the current

model structure, are only an estimate of the true phases. Clearly the

plete. In any given set of calculated phases, some will be more in error

than others. For a reflection with large and almost equal and

when is small. This variation in reliability of the phases can be

incorporated into the calculations by multiplying each contribution by

a weight, which increases with expected reliability. Various weight-

ing schemes have been developed and used, with weights calculated

portion of unknown electron density in the structure. Appropriately

Illustration in one dimension

Fourier syntheses and reduce noise. Weights that are can

be used to aid the search for hydrogen atoms in the later stages, by true sign model sign

sis for checking the completeness of a refined structure; by this stage 4 64 51 − −

and the Fourier summation can easily be demonstrated pictorially. Only 20 33 31 + +

positive values of the index need to be considered, each giving a double

positive or negative sign, or We use some data measured

and a bromine atom (the detailed molecular structure is not important

here); this crystallizes in a unit cell with one long axis the molecule

atoms, Br and several C. There are two molecules per unit cell, appear-

ing as inversions of each other along the two halves of the cell axis. This

projection can be investigated with just the reflections, with the

Table 8.1 lists the observed amplitudes of the measured reflections

with between 3 and 21 (|F and the amplitudes calculated from

a model structure consisting only of the two symmetry-equivalent Br

atoms (|F via the one-dimensional equivalent of (8.1)); how these Br

atoms can be found from the data is considered in the next chapter, on

the correct signs obtained by calculation from the complete structure

once it is known (true signs), and the signs obtained from the model

containing only the Br atoms (model signs). Below Table 8.1 are shown

in Fig. 8.4 the individual terms that contribute to the

sum in (8.4), ignoring the signs Carrying out a Fourier synthesis 0 1

to obtain the one-dimensional electron density just means adding up

the reflections in Table 8.1 to the one-

tions is 2 , which is over half a million: not a good case for trial here with positive sign (zero phase angle);

and error! Several different variants on (8.4) are shown graphically in l

the reflections are in order, with 3 at the 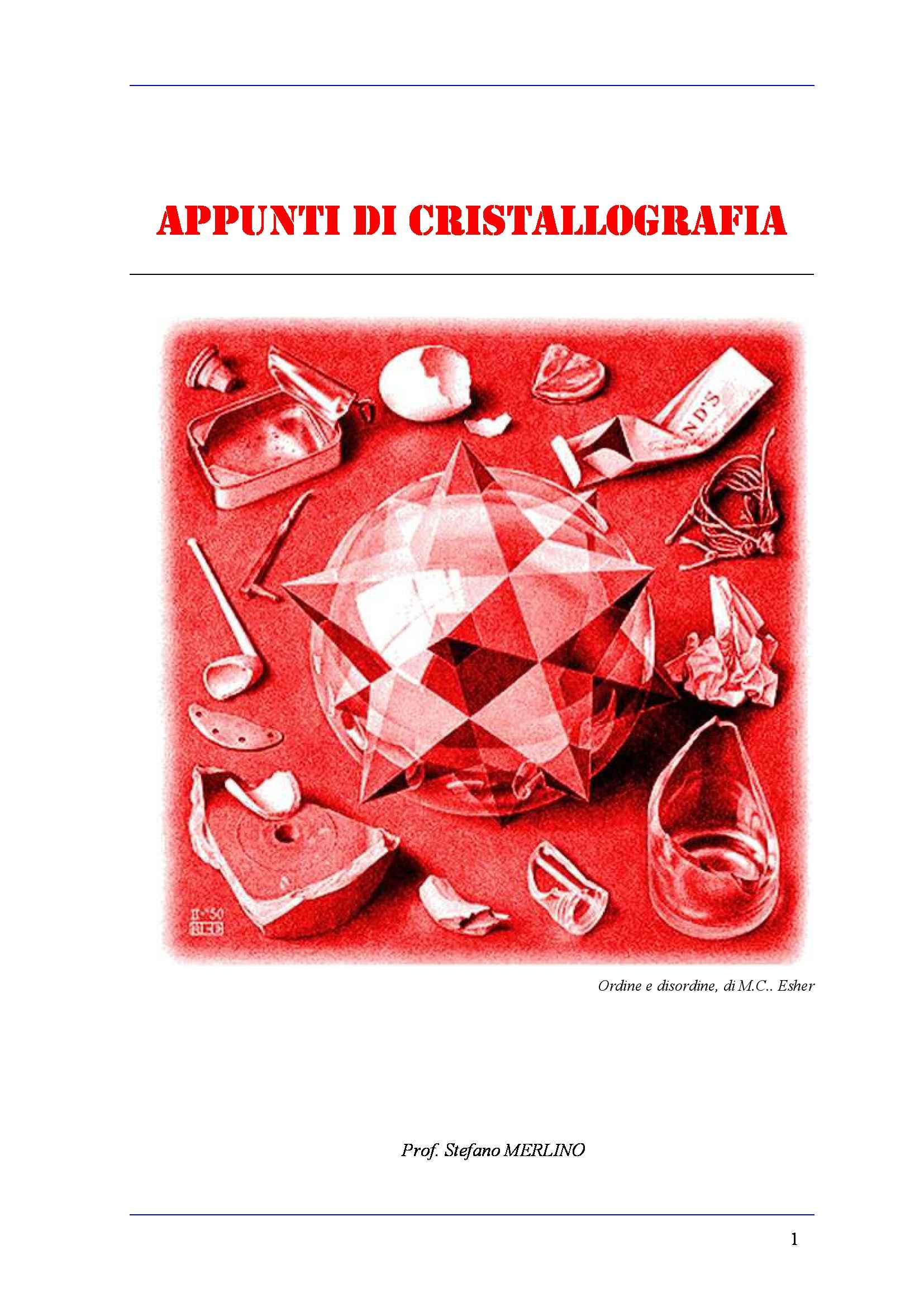 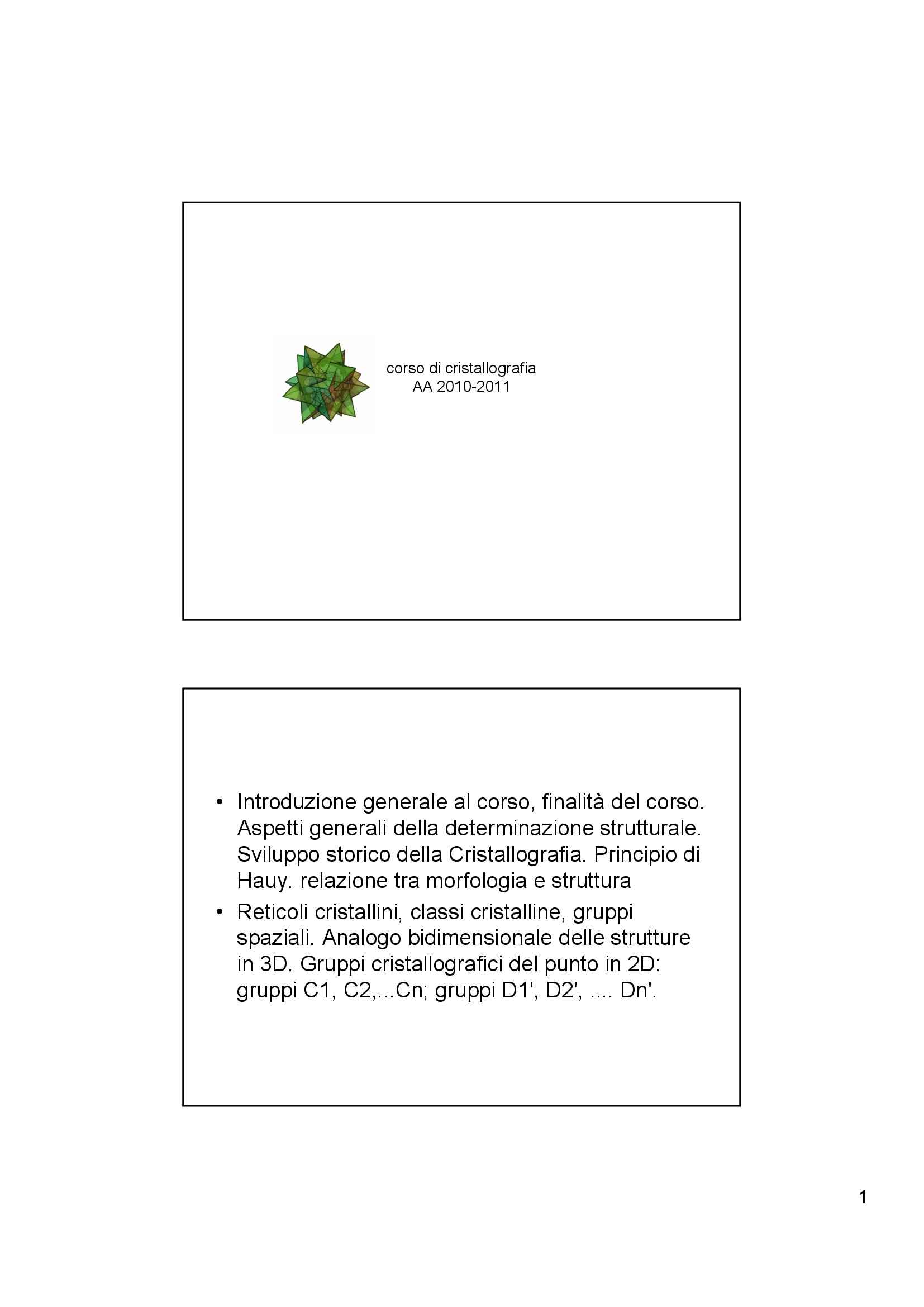 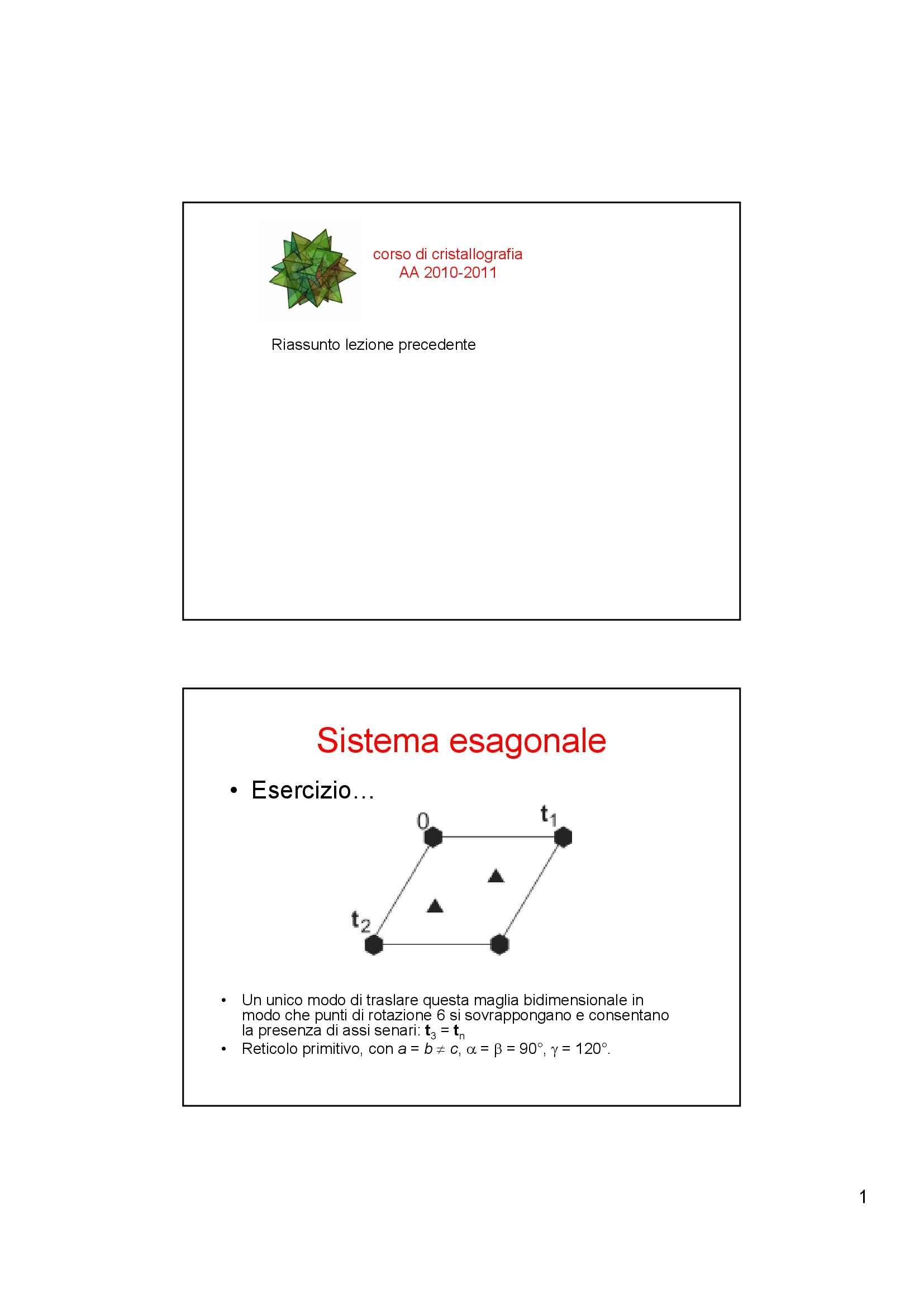 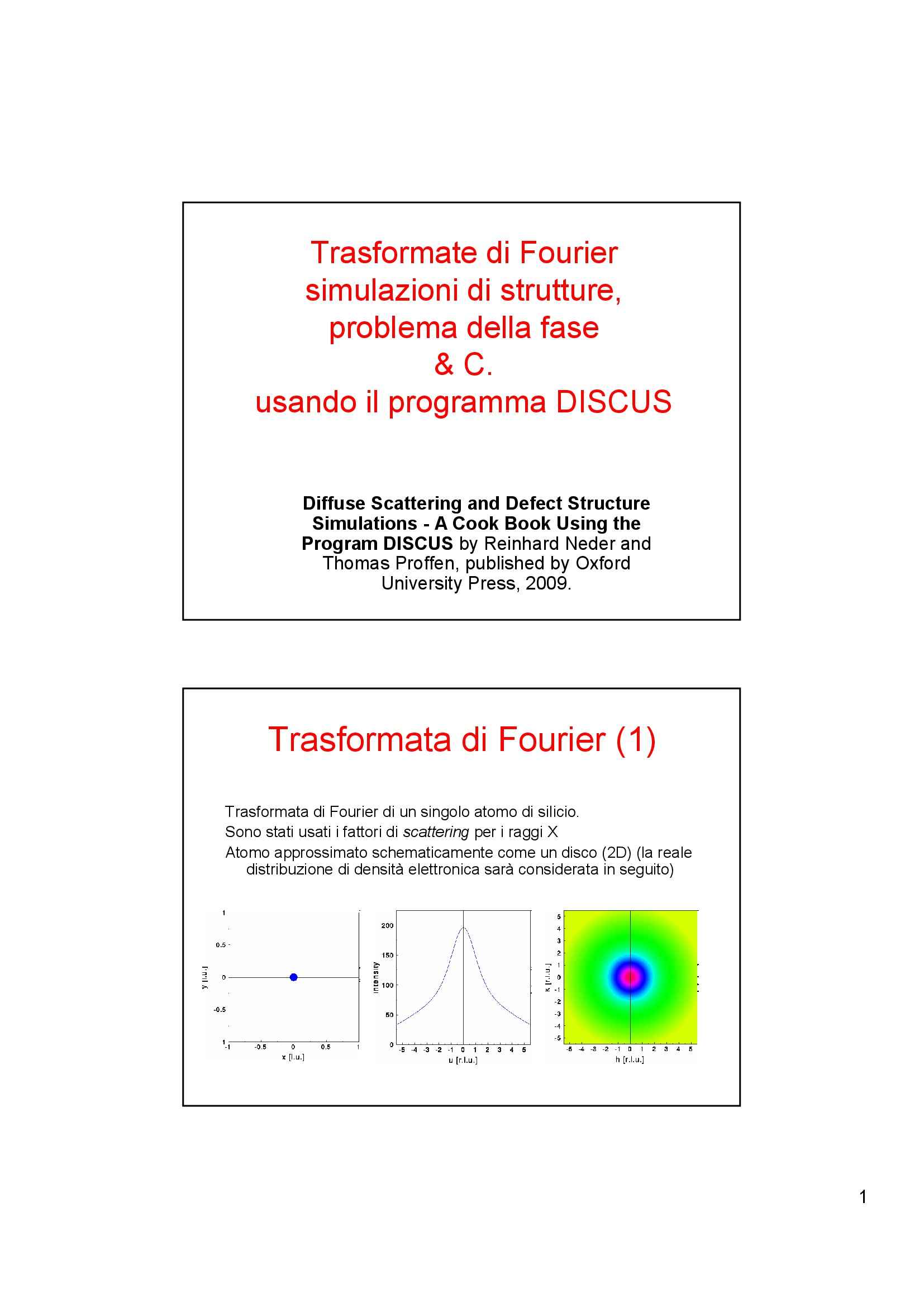