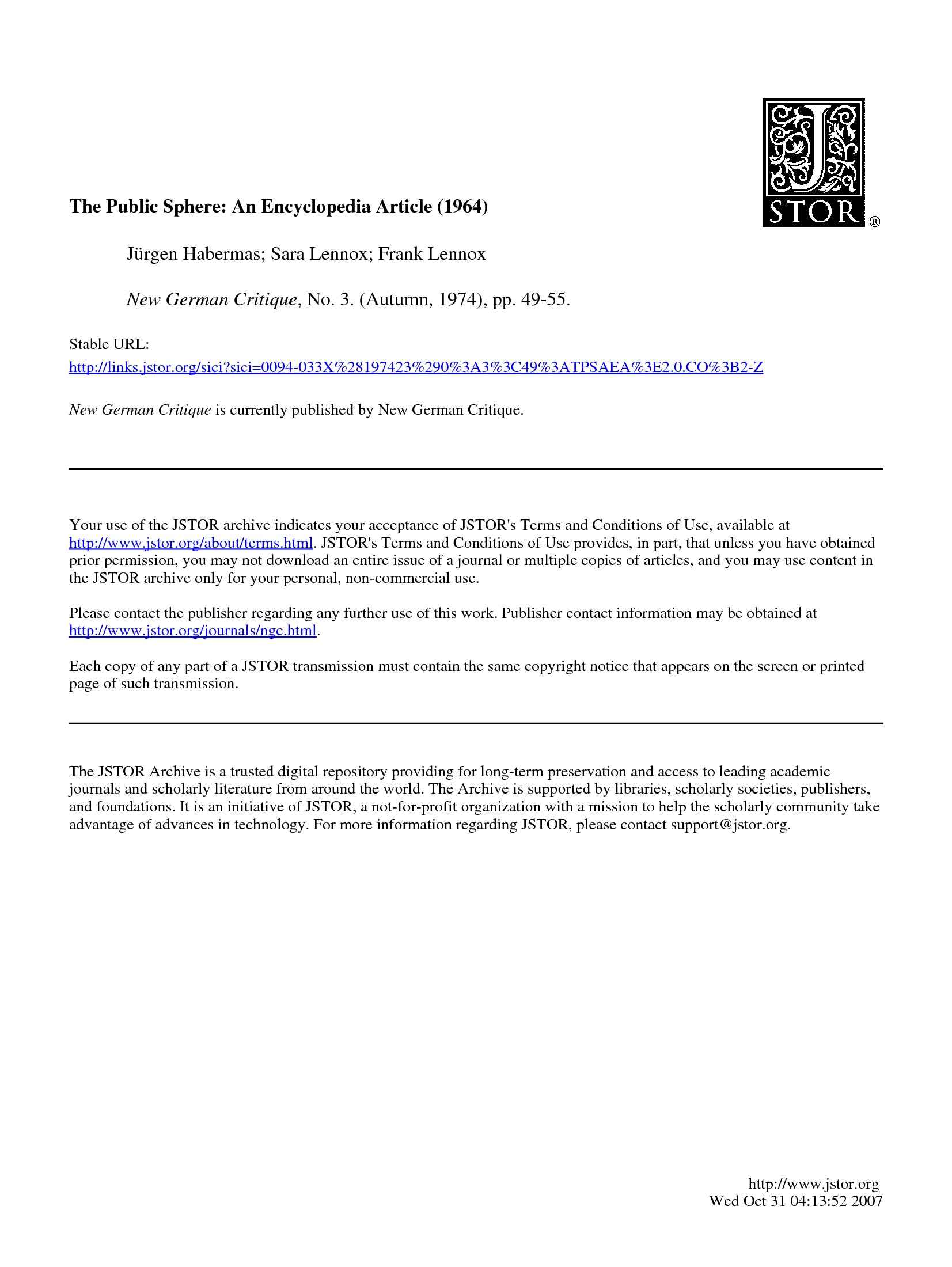 The Public Sphere: An Encyclopedia Article (1964)

Your use of the JSTOR archive indicates your acceptance of JSTOR's Terms and Conditions of Use, available at

http://www.jstor.org/about/terms.html. JSTOR's Terms and Conditions of Use provides, in part, that unless you have obtained

prior permission, you may not download an entire issue of a journal or multiple copies of articles, and you may use content in

the JSTOR archive only for your personal, non-commercial use.

Please contact the publisher regarding any further use of this work. Publisher contact information may be obtained at

page of such transmission.

journals and scholarly literature from around the world. The Archive is supported by libraries, scholarly societies, publishers,

and foundations. It is an initiative of JSTOR, a not-for-profit organization with a mission to help the scholarly community take

advantage of advances in technology. For more information regarding JSTOR, please contact support@jstor.org.

1 . The Concept. By "the public sphere" we mean first of all a realm of our

social life in which something approaching public opinion can be formed.

Access is guaranteed to all citizens. A portion of the public sphere comes

into being in every conversation in which private individuals assemble to

form a public body.' They then behave neither like business or professional

people transacting private affairs, nor like members of a constitutional order

subject to the legal constraints of a state bureaucracy. Citizens behave as a

public body when they confer in an unrestricted fashion-that is, with the

guarantee of freedom of assembly and association and the freedom to

express and publish their opinions-about matters of general interest. In a

transmitting information and influencing those who receive it. Today

newspapers and magazines, radio and television are the media of the public

sphere. We speak of the political public sphere in contrast, for instance, to

the literary one, when public discussion deals with objects connected to the

activity of the state. Although state authority is so to speak the executor of

the political public sphere, it is not a part of it.2 T o be sure, state authority

is usually considered "public" authority, but it derives its task of caring for

the well-being of all citizens primarily from this aspect of the public sphere.

democratic demand that information be accessible to the public, does the

political public sphere win an institutionalized influence over the

government through the instrument of law-making bodies. The expression

body of citizens informally-and, in periodic elections, formally as well-

the ruling structure organized in the form of a state.

Habermas' concept of the public sphere is not to be equated with that of "the public,"

i.e. of the individuals who assemble. His concept is directed instead at the institution, which to

be sure only assumes concrete form through the participation of people. It cannot, however, be

characterized simply as a crowd. (This and the following notes by Peter Hohendahl.)

The state and the public sphere do not overlap, as one might suppose from casual

language use. Rather they confront one another as opponents. Habermas designates that sphere

as public which antiquity understood to be private, i.e. the sphere of non-governmental opinion

schrgten), for example those providing for open court hearings, are also

related to this function of public opinion. The public sphere as a sphere

which mediates between society and state, in which the public organizes

itself as the bearer or public opinion, accords with the principle of the

-that principle of public information which once had to be

time has made possible the democratic control of state activities.

opinion arose for the first time only in the eighteenth century. They acquire

their specific meaning from a concrete historical situation. It was at that

time that the distinction of "opinion" from "opinion

unchanged in their natural form as a kind of sediment of history, public

is presupposed. Public discussions about the exercise of political power

which are both critical in intent and institutionally guaranteed have not

result of a particular constellation of interests.

2. There is no indication European society of the high middle ages

possessed a public sphere as a unique realm distinct from the private sphere.

Nevertheless, it was not coincidental that during that period symbols of

sovereignty, for instance the princely seal, were deemed "public." At that

time there existed a public representation of power. The status of the feudal

lord, at whatever level of the feudal pyramid, was oblivious to the categories

"public" and "private," but the holder of the position represented it

publicly: he showed himself, presented himself as the embodiment of an

ever present "higher" power. The concept of this representation has been

maintained up to the most recent constitutional history. Regardless of the

degree to which it has loosed itself from the old base, the authority of

head of state. Such elements, however, derive from a pre-bourgeois social

is demonstrable in social history. Habermas thus would mean a model of norms and modes of

first time. These norms and modes of behavior include: a) general accessibility, b) elimination

of all privileges and c) discovery of general norms and rational legitimations. 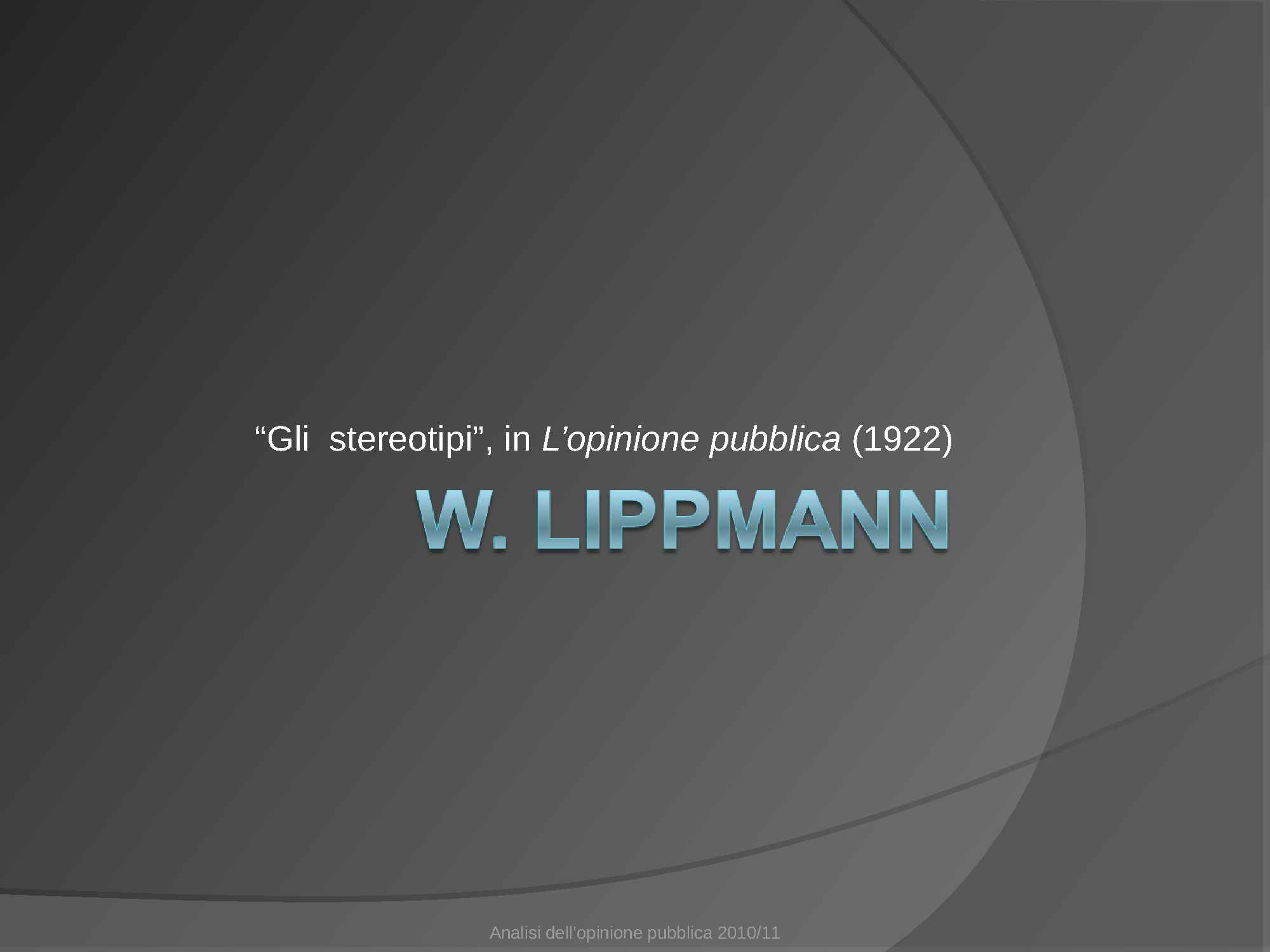 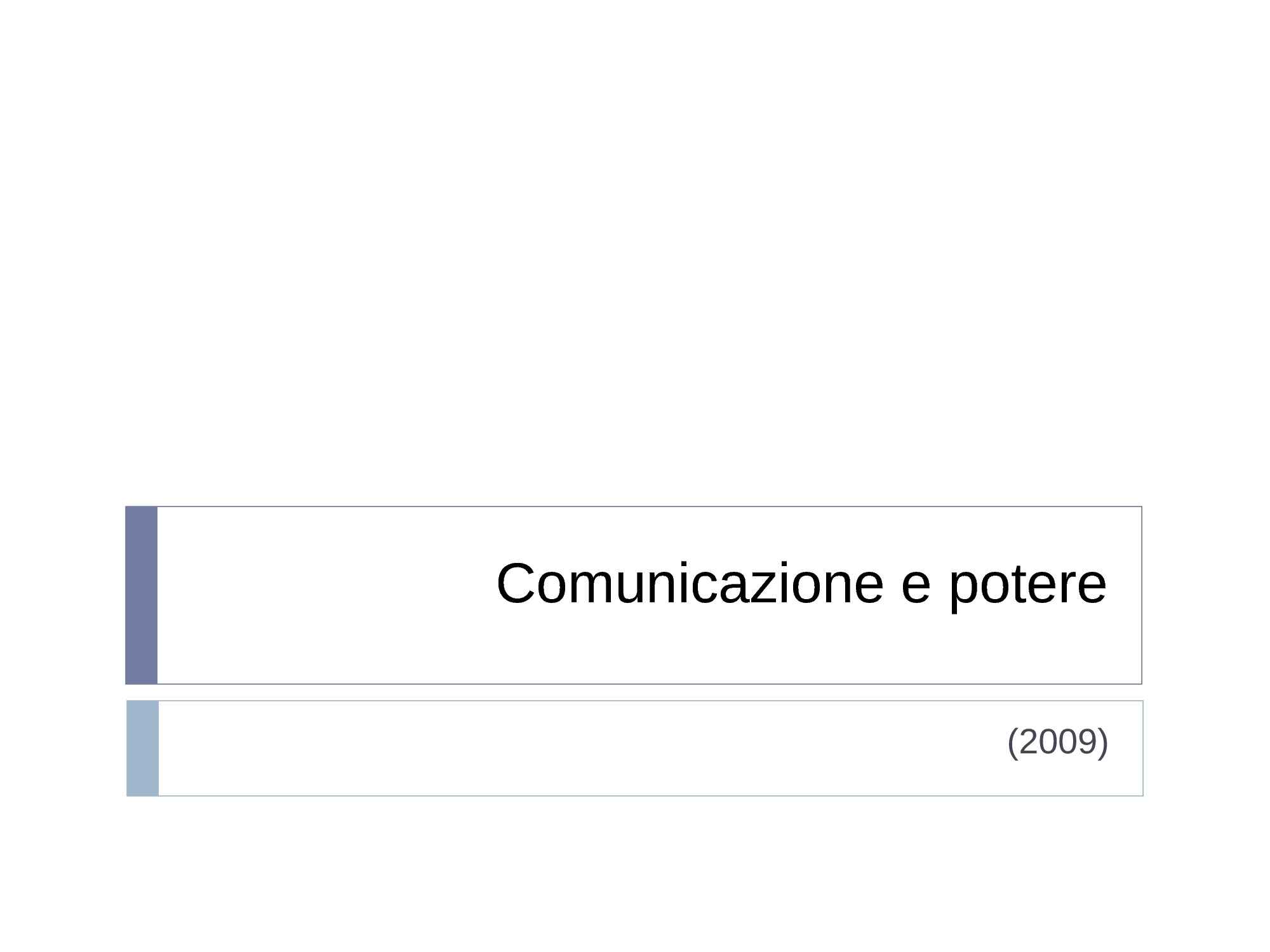 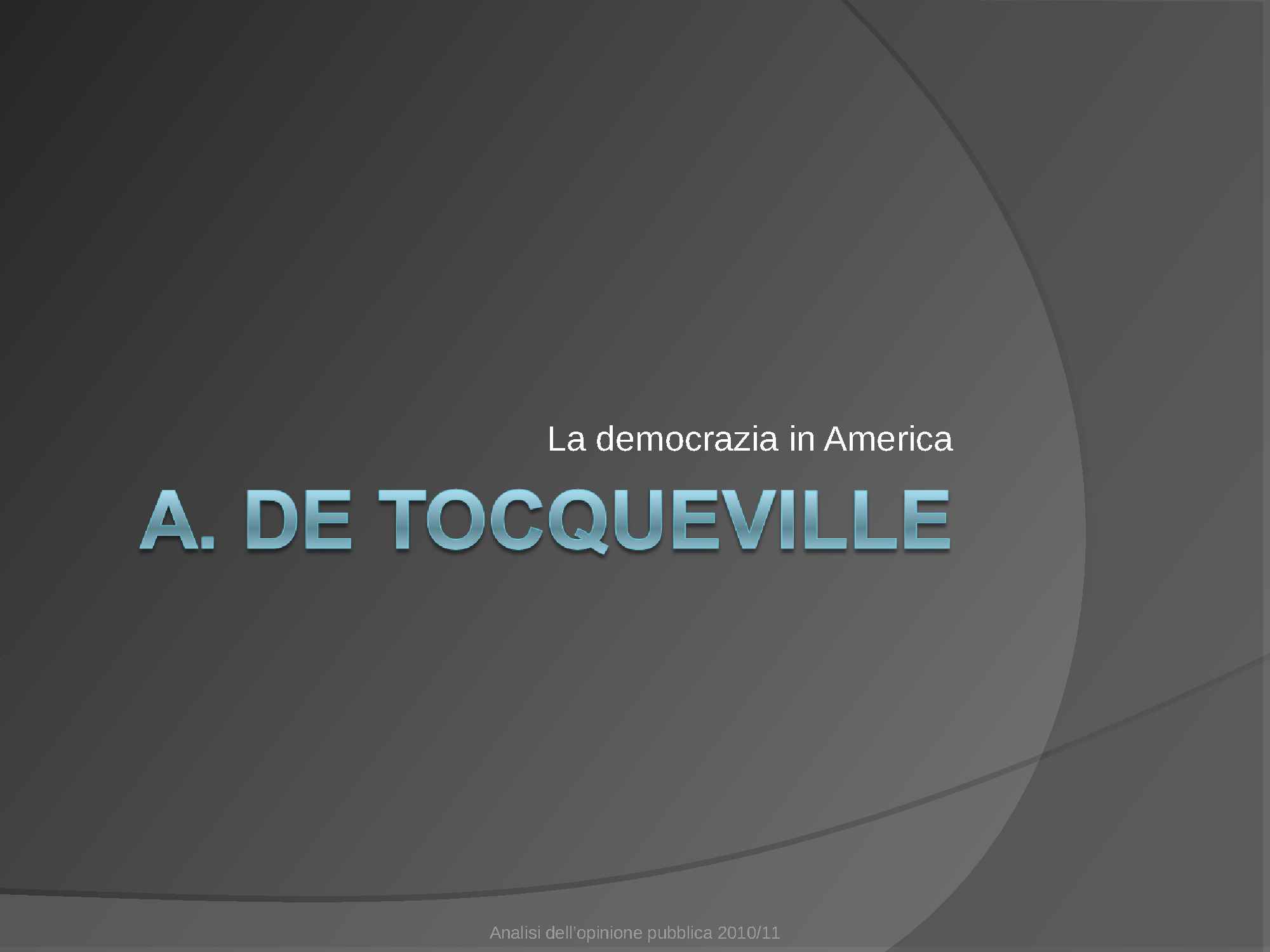 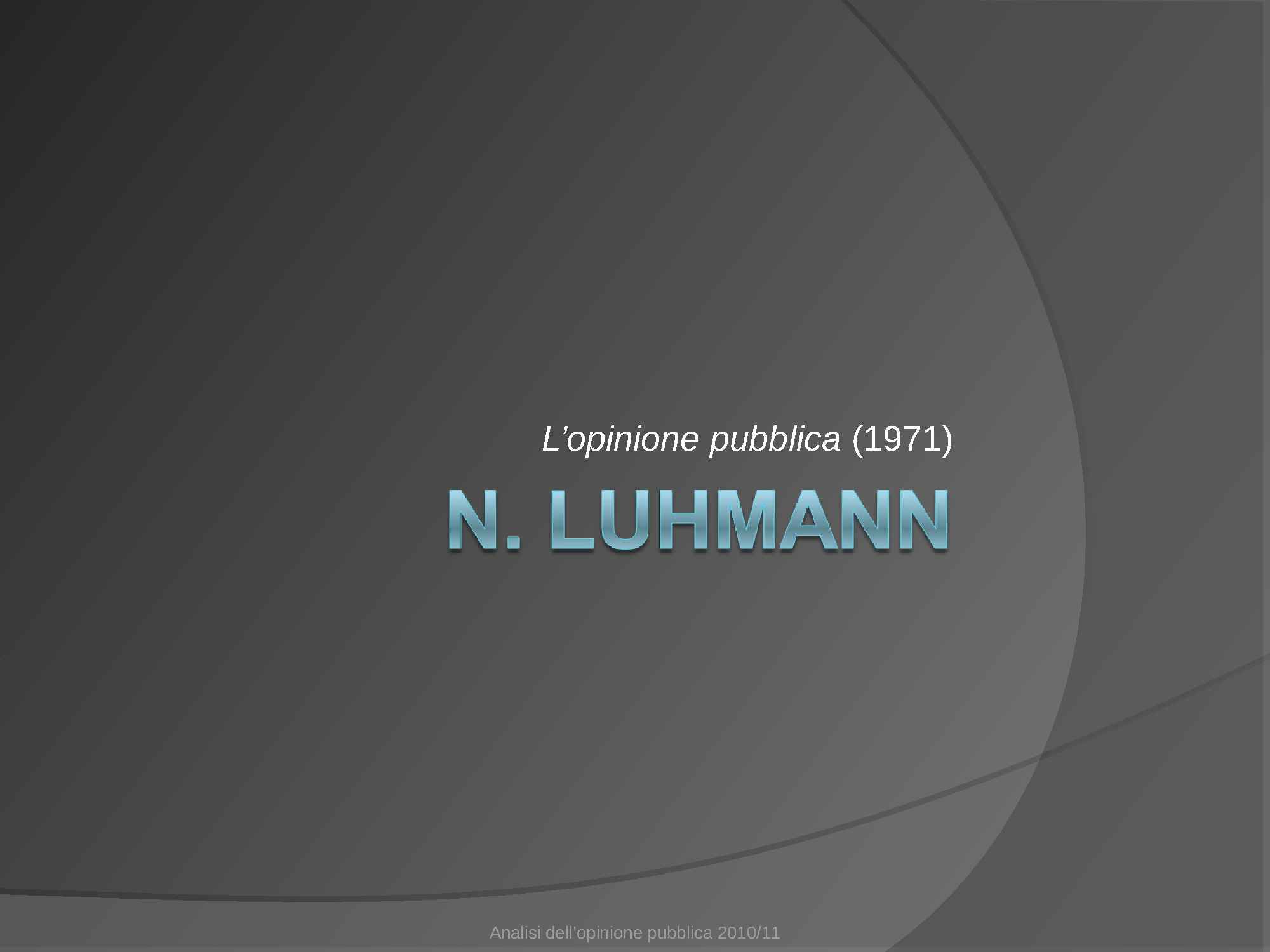