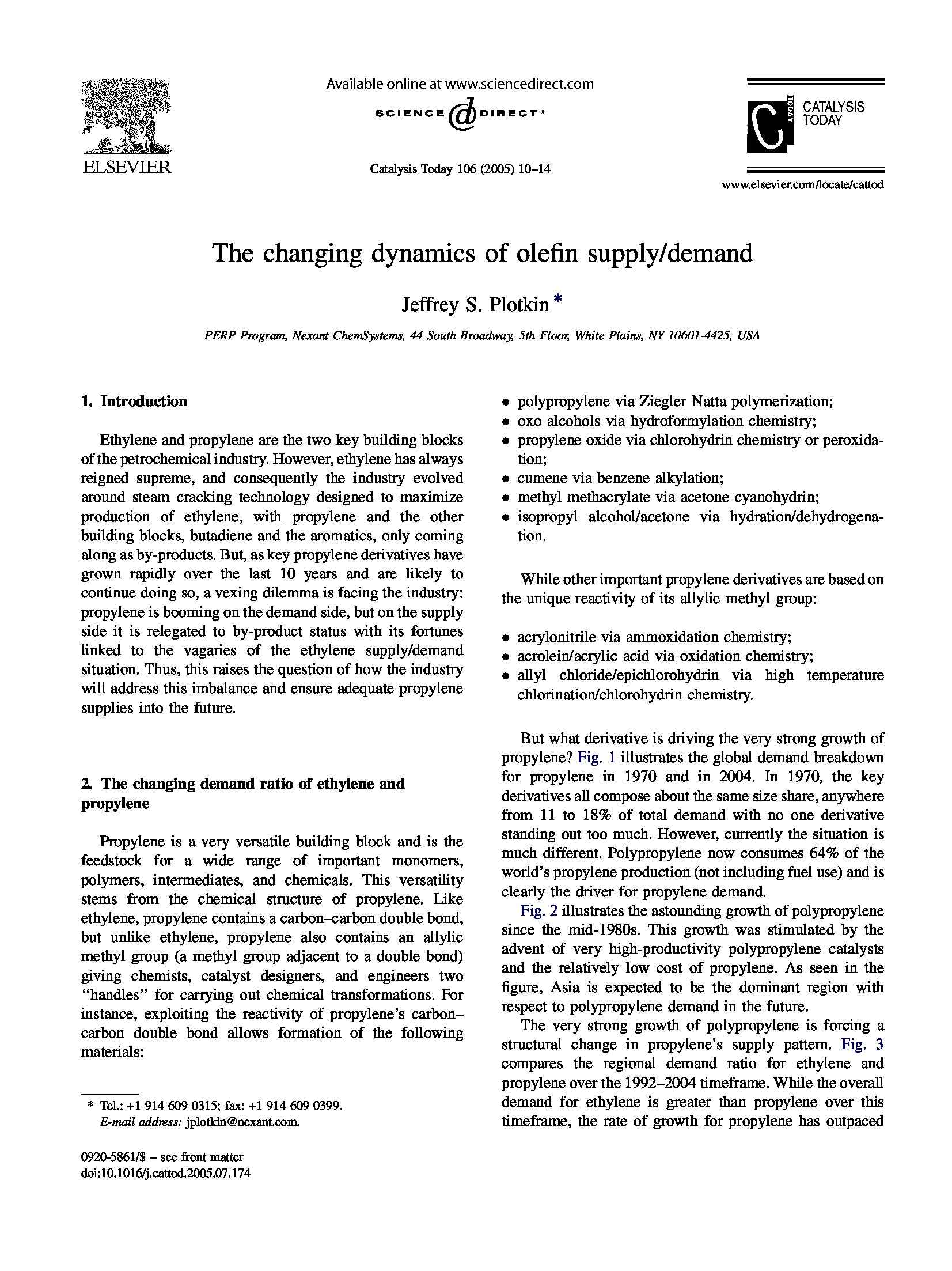 refinery grade propylene to either chemical grade or polymer

ethylene’s growth rate. For instance, in the U.S., the P/E grade propylene. Fig. 5 shows the breakdown of propylene

demand ratio has increased from 0.43 in 1992 to 0.54 in sources on a regional basis. In all regions, refineries are an

2004. The same phenomenon is seen in West Europe and important source of propylene, but especially so in the U.S.

Asia Pacific, but to an even greater degree. In Asia Pacific, as steam cracking feeds in the U.S. are relatively light and

the P/E demand ratio is a very high 0.77. The Middle East is produce lesser amounts of propylene than those regions

low cost ethane with the P/E ratio staying relatively flat since capacity base in the U.S. allows the propylene supply gap to

1996. be bridged relatively easily. But it should also be noted that

As propylene growth rate continues to outpace ethylene other sources of propylene have also become necessary.

growth rate, this will continue to put stress on traditional These are the so-called ‘‘on purpose propylene’’ technol-

propylene has been considered a by-product of ethylene

production. The amount of propylene coming out of a steam

cracker is a function of the cracking feedstock used. For

example, if ethane is the feedstock, only 0.019 t of propylene

are produced for every ton of ethylene made. As feedstocks

get heavier, propylene output increases as shown in Fig. 4.

Thus, the amount of propylene able to be produced in steam

crackers is fixed (with some limited amount of flexibility

based on operating severity and the ability to change feeds

from gas to liquids that some crackers have).

To make-up this shortfall, refineries are able to capture

bonds of olefins are broken in the reaction, and different

olefins are formed using parts of the reactants. The species

yed and operating temperature will determine which

reaction predominates, and therefore, which products will

In order to make propylene, this technology combines

ethylene and butylenes from the naphtha crackers C stream.

This process also has the option of dimerizing ethylene into

2-butene or using n-butenes from C fractions, followed by

Fig. 5. Regional propylene supply sources, 2004. the metathesis reaction between ethylene and 2-butene to

esis and other emerging processes.

What does the future look like with regards to propylene

incremental ethylene and propylene demand from 2004 to

2012 by region on a relative basis. The incremental P/E

demand ratios are also shown for each region. In the North

demand ratio is expected to continue to increase over the Conversion Technology (OCT, also known as Triolefins)

current high levels. This will put further stress on in 1997. BASF and Fina are operating a plant using this

ment and commercialization plans for propylene-boosting cracker at Port Arthur, TX. With the addition of the OCT, the

technologies for petrochemical plants, refineries and stand- nameplate capacity of the cracker is 1.8 billion pounds

alone units. This paper will focus on those technologies (816,000 metric tons) per year ethylene and 1.95 billion

and FCC units. also been implanted at Mitsui Chemicals olefins plant in

The impending propylene supply/demand gap has Petroleum Corporation (CPC) of Taiwan. A demonstration

conventional technologies to increase the amount of from April 1988 to September 1990.

propylene ‘‘on-purpose’’. technology can be incorporated within an FCC facility to

Olefin metathesis or disproportionation, provides an 4 5

generating interest due to the possibility/potential of

technology is similar to metathesis in that low value

However, the differences between the technologies are

streams can be converted along with the C stream,

including isobutene. Normal butenes do not have to be

isomerized. In addition, ethylene is not consumed in the

process; in fact, additional ethylene is produced along with

This type of process has been described by several 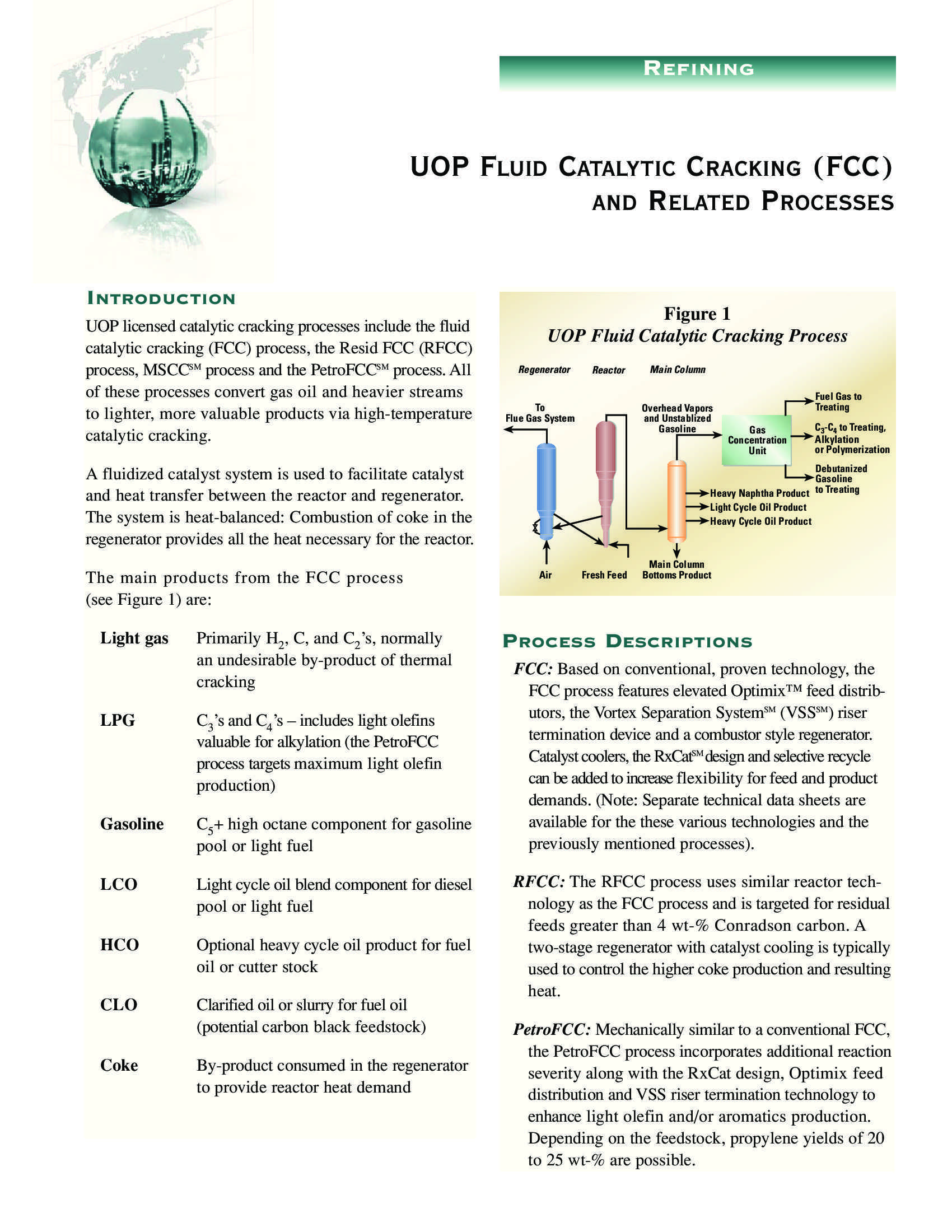 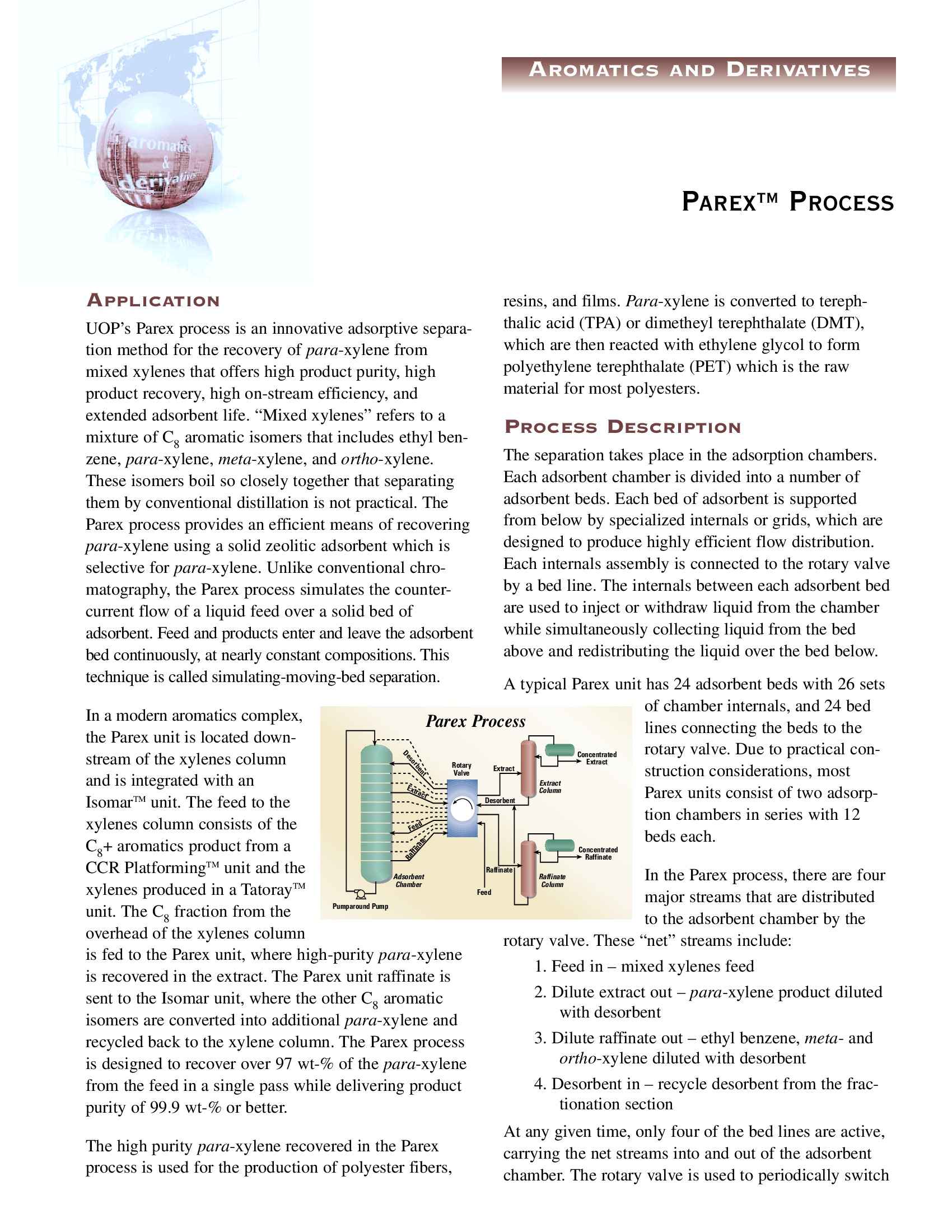 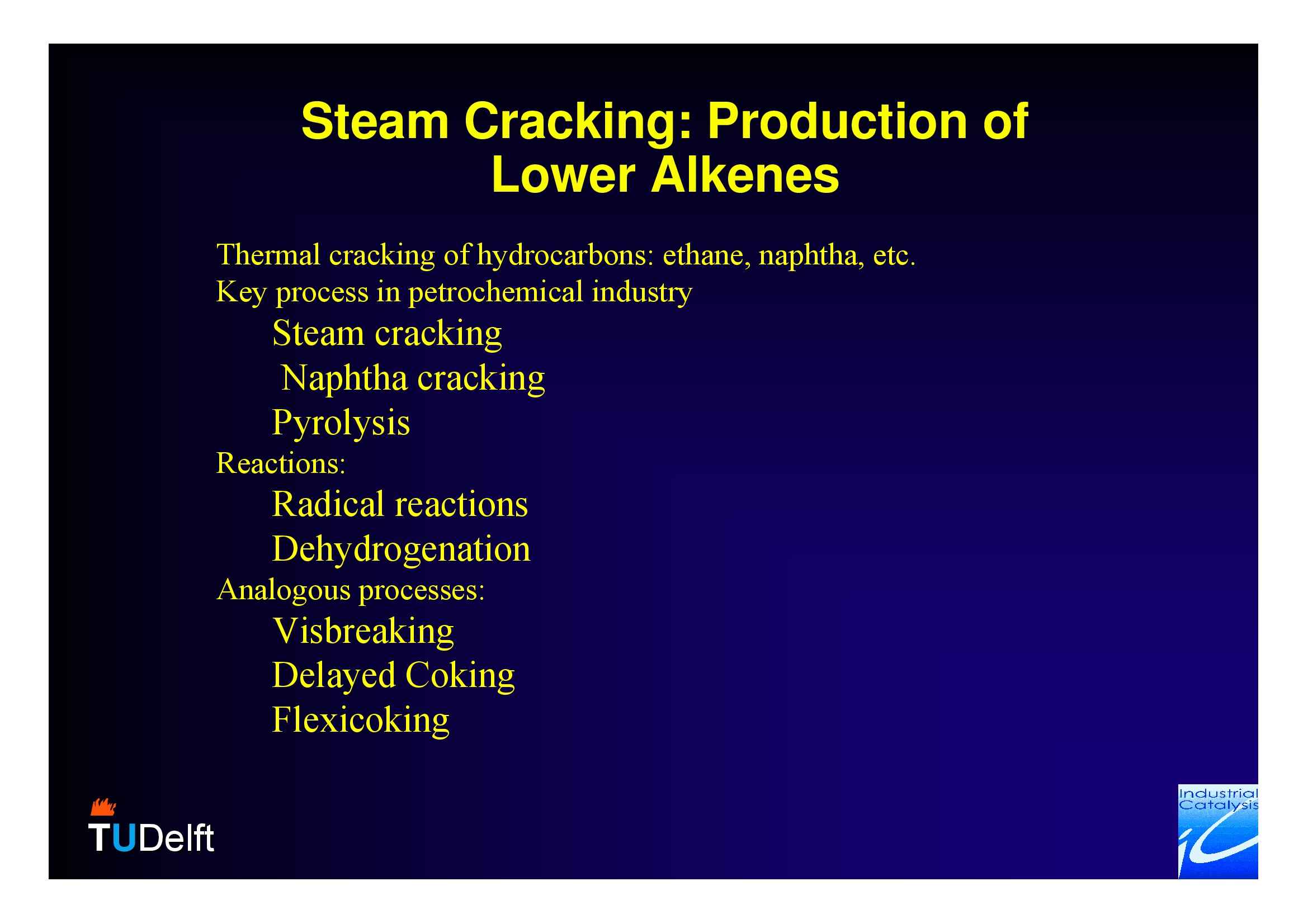 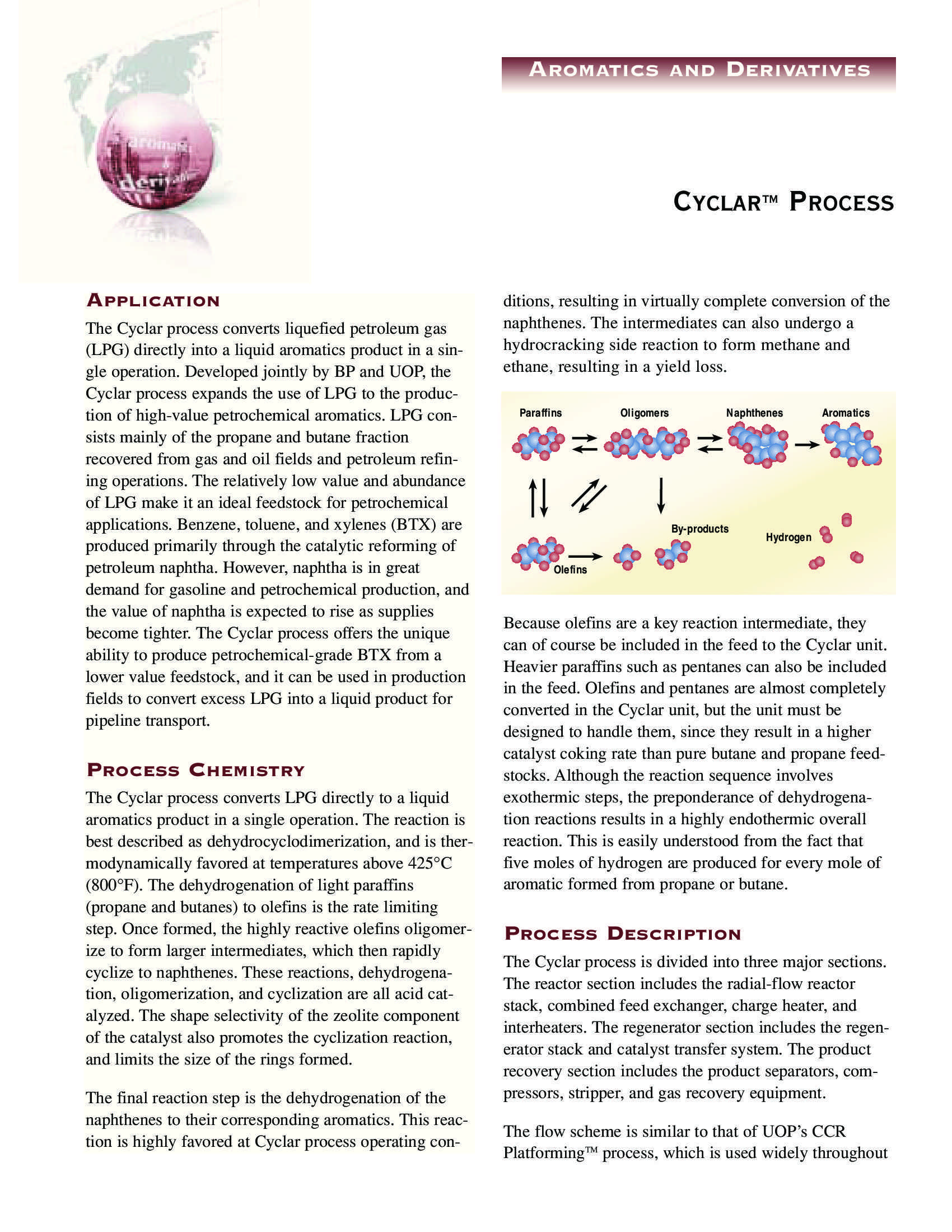